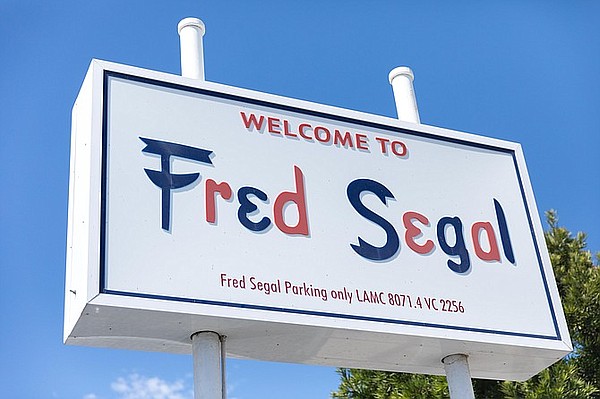 For decades, the Fred Segal logo marquee sign overlooked the busy intersection of Melrose Avenue and Crescent Heights Boulevard in Los Angeles. But that mid-city neighborhood’s once-familar skyline changed. The Fred Segal marquee sign came down recently. In fact, almost every sign bearing the name of Fred Segal was removed from the retail compound of 8100 Melrose Avenue. It’s the address where the recently deceased entrepreneur Fred Segal started his highly influential style of retailing in 1961.

A Fred Segal shop has not done business at the compound for years. In 2012, a group of entrepreneurs acquired the intellectual property for the Fred Segal brand. In 2017, this group opened a Fred Segal flagship in West Hollywood, Calif. This store, and a handful of other Fred Segal stores, including one in Malibu, Calif., currently bear the famous red, white and blue Fred Segal sign. The brand-licensing company Global Icons currently has the rights to the Fred Segal name and runs Fred Segal stores.

Last year, the Ninth Circuit Court of Appeals ruled that CormackHill, the current owner of the Melrose Avenue compound, was required to take down Fred Segal signs.

However, the spirit of boutique retail continues to run at the 8100 Melrose Avenue compound. The influential Ron Herman boutique retailer is located there and installed a big store sign on the compound’s ivy covered walls during Fall 2020. James Quirk, Ron Herman’s director of retail, said that his retail center is currently going through a rebranding process and will unveil new signage later this year.