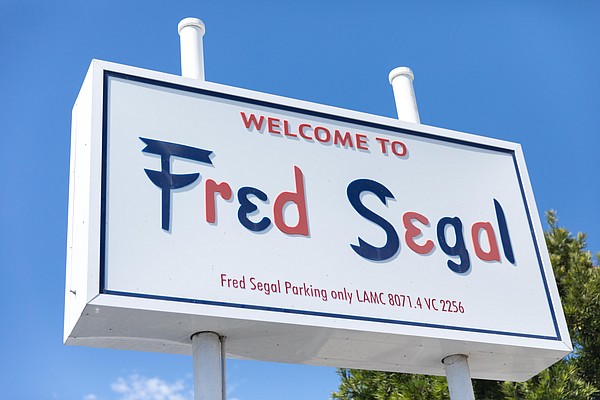 The Ninth Circuit Court of Appeals ruled that CormackHill, the current owner of the Melrose Avenue compound, which has not housed a Fred Segal store for more than four years, must take down the signage bearing the red, white and blue Fred Segal signature logo that has stood over the busy intersection of Melrose Avenue and Crescent Heights Boulevard for decades.

In legal proceedings that started in 2016, CormackHill argued that its purchase of the property at 8100 Melrose Avenue included rights to use the signage. Headquartered in Canada, CormackHill is a company owned by the Cormack Brothers, who started the Herschel Supply Co. accessory company, and Brian Hill, who owns the retailer Aritzia. The property was acquired for $43 million. The compound’s current tenants include pioneering retailer Ron Herman and the popular eatery Mauro’s Café.

The Ninth Circuit decision ruled that rights to signage did not apply to third parties such as CormackHill, who acquired the landmark property from Bud Brown, a colleague of Fred Segal. Rights to the signage only applied to the Brown family.

In 2017, a Fred Segal flagship store opened on 8500 Sunset Blvd., in West Hollywood, Calif. Fred Segal was acquired by Global Icons in 2019. Allison Samek, Fred Segal’s president, said on Aug. 19 that the recent decision would dispel any confusion over the location of Fred Segal.

“After an almost-four-year battle to preserve Fred Segal’s intellectual property, we’re truly thrilled with the outcome and opportunity to move the brand forward,” Samek said. “While we were hopeful we could come to an agreement earlier, we’re excited to put this behind us and direct our attention to the success of our flagship location, Fred Segal Sunset, which continues to be the purveyor of L.A. style and culture.”