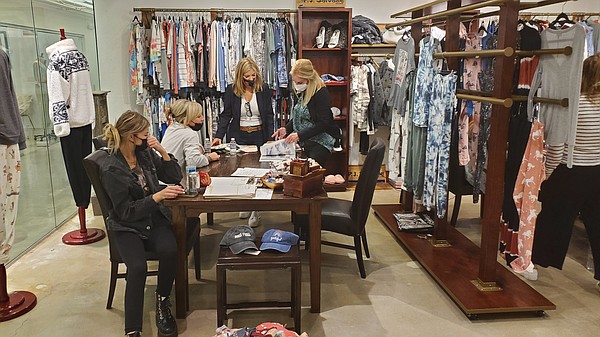 During L.A. Market Week, buyers visited buildings in the downtown Los Angeles fashion district for in-person appointments, such as this meeting at the Rande Cohen Showroom in The New Mart. Photo: Tom Keefer

With COVID-19 vaccinations being rolled out and pandemic restrictions being scaled back, L.A. Market Week took place in downtown Los Angeles March 7–10 with more optimism than has been seen over the past year. While still cautious, showroom buildings in the area’s fashion district, including the California Market Center, The New Mart and the Cooper Design Space, welcomed buyers to stock up on inventory.

“For women’s, the denim focus was on authentic, lived-in washes in slim, straight fits, cropped flares and high-rises,” Cotton said. “Leather, luxe coating and vegan leather were huge trends! Everyone is loving this trend in sleek pull-on leggings, classic five-pocket fits and edgy jogger silhouettes like the Mayslie.”

There was also a demand for women’s dressier styles with cozy knit tops and dresses and vintage-inspired silk shirting, while men’s soft sweaters, plaids and versatility in outerwear such as bombers ticked up, according to Caton.

“For men’s bottoms, it was all about the new Fall colors in our bestselling Transcend pigment dye and reactive-dye five-pockets, our new high-stretch micro corduroy pants and joggers and our versatile Fraser Pant,” Caton said.

On the third floor, Todd Millspaugh, a partner with Money Ruins Everything, saw interest from local buyers in sportswear, footwear and workwear from FILA, éS footwear and Timex watches. Millspaugh noted that buyers were pleased with shopping the CMC.

“It’s a safe and easy place to accomplish a lot of work in one place,” Millspaugh said.

Gabrielle Zuccaro, founder of the veteran Los Angeles–based women’s boutique Bleu, shopped the Cooper Design Space, placing orders about the same as those at the L.A. Market Weeks in January and October. Brands and wholesalers needed to prepare for the post-COVID-19 boom that was forecasted to take place later this year, she said.

“There’s going to be so many weddings from the beginning of summer to the end of the year,” Zuccaro said. “It’s going to be a huge opportunity.”

She saw a lot of outerwear and sweaters being displayed. “Plaids are coming back. Prints are coming on strong. I don’t think people are doing enough dresses,” she said.

Fraser Ross, founder of the Los Angeles–headquartered Kitson boutiques, estimated that his shops’ orders increased 50 percent compared to the January 2021 L.A. Market Week because he has a better idea of where the economy is going.

“It felt like there was a lot of activity, and there was some newness in the products. People are seeing light at the end of the tunnel,” Ross said. He forecasted the upcoming back-to-college market would be a big opportunity.

Showcasing brands including Milly, Judith & Charles, Cecile Copenhagen, Kasia, Happy Sheep and Blackscore and introducing the luxury Brazilian knitwear line Paola Bernardi, Marco Lebel of the Lebel Fashion Group also agreed that the economy seemed to be opening up. “But people are very much in COVID-protection mode. They were still booking Immediates and 90 days out,” he said. Lebel also noted that buyers, in addition to ordering Fall, were viewing Spring, Summer and pre-Fall.

Checking the economy’s pulse at The New Mart

At The New Mart, Eme Mizioch, owner of the Joken Style Showroom, sensed a growing optimism among retailers. “There was a sense of ease and peace with people being vaccinated. But there was an emphasis on Immediates and products with a quick turnaround,” she said. She was representing the brands Capittana, Sunies Sandals, Zavi and RT Designs.

Jackie Bartolo, West Coast sales manager of the Velvet Hearts showroom, was happy with the market.

“The market was good for the first couple of days. The customers who were coming in were serious about buying,” she said. “They were healthy orders for the amount of customers. I’m definitely grateful for the market I had.”

For market, Don Reichman of Reichman Associates sublet space at The New Mart to represent his lines Alison Sheri, Elena Wang, Brand Bazar, Karissa & Me and Damee. He said that those retailers working the market submitted strong orders but that they were playing it safe.

“They were placing orders for lines that had performed well for them,” Reichman said.

Rande Cohen of the self-named Rande Cohen Showroom estimated that the March market’s buyer traffic increased 50 percent compared to the January show. Some buyers dropped by her showroom after taking Zoom meetings with her. “They were able to come in and add to their orders on things that they were unsure about,” she said. “They got to really see, feel and touch clothing in-person.”

There was an improvement during this market, according to Barbara James, founder of the self-named Barbara James Showroom, but she said that buyers were being cautious with how much money they would invest in orders. “Traffic was up and the stores that came had a more optimistic mindset,” she said.

During market, James made a formal introduction of Fanco, a Los Angeles–based sweaters and tops line.