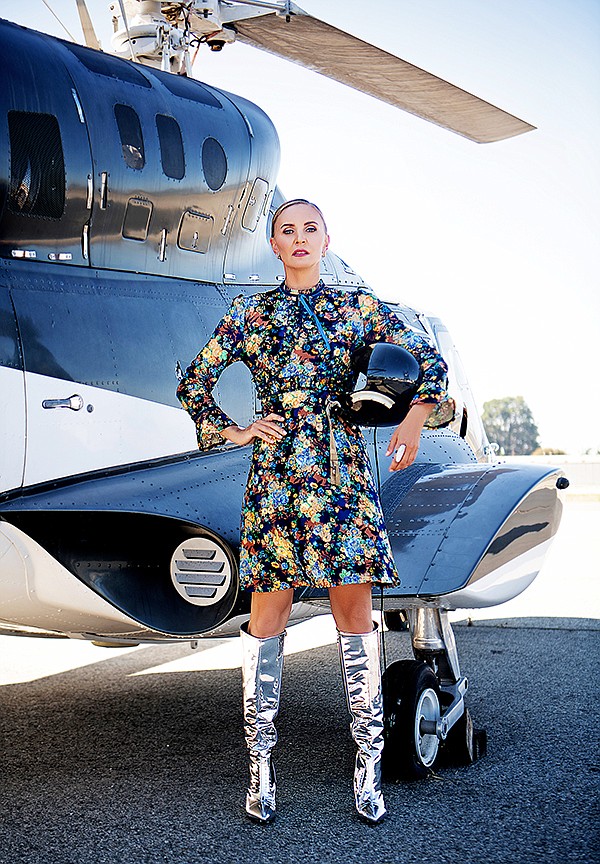 Dalia MacPhee created a Fall 2022 collection inspired by the resurgence of travel when she chose to shoot the season’s campaign at the Compton/Woodley Airport in Compton, Calif. MacPhee’s vision for shooting the campaign among the great marvels of machinery from the 20th century stemmed from thinking about fashion blended with the artistry of the vintage aircraft.

“The first inspiration was the flight of fashion where everyone is getting back into travel. This is the Roaring Twenties of travel. You can see it everywhere in the campaign because the brand is always a bit of that Old Hollywood mixed with modern,” MacPhee said. “The older planes are like older cars when we still had some art to it. They tie in with the vintage theme and the desire I have that people will start dressing up when they travel again. That was the first inspiration, and we had many aeronautical masterpieces at the airfield.”

Choosing an airfield for the setting of the campaign established a mood of uplifting the women who modeled MacPhee’s pieces. From helicopters to airplanes, the different types of aircraft created a unique backdrop for the elegant pieces, yet the setting paired with the strength relayed by the models sends another message that is important to MacPhee.

“This collection was created by a woman at a woman-run company that believes in women and the power of women,” MacPhee said. “Choose wisely regarding what you wear. Life is short and we’re all learning that—get the red dress. Be bold in your fashion. Be bold in your life. Remember your power. I always hope that when she puts on something of mine she feels like she has that superwoman cape. We need more women speaking up right now.”

Color inspiration for the collection stemmed from Pantone trends for the year such as sea-foam green, while MacPhee also looked within to her own preferences for the upcoming season such as neon, candy-apple red, marigold, buttercup yellow, bold fuchsia and deep royal blue. There is a dress that employs a camel-colored knit on top and a chiffon color-blocked skirt. MacPhee also has incorporated an ombré effect on certain pieces. Bold prints in chiffon generate excitement in florals, and the designer created standout pieces in jewel tones.

While MacPhee designs sophisticated pieces, she also enjoys having fun when she creates. Knits and sweater dresses, while incorporating mixed media, is a formula to which MacPhee subscribes to offer comfort and elegance.

“The dress with the silver boots is a beautiful burnout. When you run your hand over it, it almost feels like a flower garden because with the burnout material there is a 3D element so the flowers pop up,” noted MacPhee. “I am playing with this new material that is a pleated Mikado type. There is structure and stretch. It doesn’t crease. The dresses look good on everyone. You can throw it in your handbag if necessary, pull it out and it’s still in perfect shape. There is a bit of science to the pleating.”

The Los Angeles–based, Canadian-born designer was also inspired by strong women who have been forced to fight for so much recently. Shooting her Fall 2022 campaign at an airport that houses historic machinery, MacPhee saw opportunity among the aircraft, such as vintage Cessnas that reflect the golden era of travel, but there were also machines that had been used to combat dangerous forces. Among them were Vietnam War–era choppers, biplanes and T-38 Talons that are used to train fighter-jet pilots. MacPhee transformed her models into stylish aviatrixes during a time the designer feels women must fight.

“We have these planes that were used to fight oppression during World War II and the Nazis,” MacPhee said, also noting that the airport pays homage to the Tuskegee Airmen, the United States’ first African-American military aviators in the U.S. Army Air Corps. “We are now at war globally and fighting every level of oppression. I always love putting women in strong positions—to show our superpower. To have them in these planes and fighter jets is a statement. It’s also a strong statement to say that we are fighting against oppression for rights and freedom on every level, especially women. I wanted something very strong to come across.”

Shooting at the airfield gave MacPhee hope as the Compton/Woodley airport is home to the Fly Compton Aeronautical Education Foundation,which encourages children, including young girls, to learn how to fly. The space affords aeronautical-education opportunities, supporting the future of aviation among young people who are often underserved.