Olima Atelier: From Gaga to Ready-to-Wear 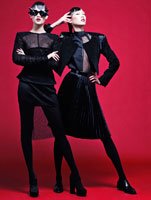 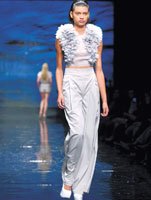 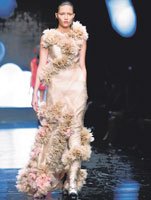 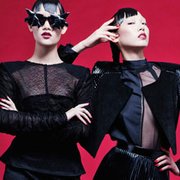 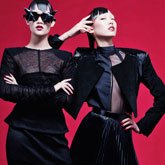 Oscar Olima has a flair for the dramatic. The designer, who burst onto the design scene after making costumes for Lady Gaga, is applying a couture touch to Olima Atelier, his new line of ready-to-wear. Avant-garde details such as pleats, leather braiding and trims made from strips of fabric are just a few of the hallmarks of the edgy, architectural collection. “I get inspired by textures,” Olima said. “I am really fascinated with what you can do with fabric and creating textures and trims.”

The designer, whose collection retails from $230 for a silk organza top to $5,000 for gowns, has made a name for himself by designing custom pieces for private clients and celebrities. After churning out a cape overnight for Lady Gaga, Olima was soon collaborating with stylist Nicola Formichetti to create costumes for the singer’s recent “Monster Ball” tour.

“I was like the go-to guy because I could turn out things she could wear during that time,” Olima explained. “She loves custom pieces.” One of the most famous pieces was the “Ice Queen” metallic dress that Lady Gaga wore at the New Year’s Eve concert in Miami last year.

Since then, Olima, who graduated from Los Angeles Trade-Technical College in 2006, has been on the fast track. The designer has created clothing for Beyonceacute;, Marina and the Diamonds, Robyn and Rachel Bilson.

In addition, he has also been hired by Costume Dept. to create its ready-to-wear collection. This is his second season with the brand, which has become a cult favorite for its leggings and edgy selection of clothing. Olima is also preparing for haute couture. He recently was hired as creative director by Beirut, Lebanon–based Abed Mahfouz to create its next collection. According to Olima, the house plans to also collaborate with fashion luminaries such as Nicholas Kirkwood and milliner Philip Treacy.

While the costumes Olima creates for Lady Gaga are geared for the stage, his ready-to-wear collection is made with wearability in mind. Fans will be happy to know, however, that the Fall collection gleans inspiration from pieces he made for the mega-star. The collection has a predominantly black palette and incorporates a lot of leather, a favorite of the singer. Leather braiding used on Gaga’s cape was reinterpreted and applied to the shoulder detail of a dress. Patent-leather harnesses are layered over traditional knit sweaters, and patent-leather strip details, reminiscent of a skeleton, are applied to the front of pants. The collection is full of details, such as strips of fabric, which are applied to its strong architectural shapes.

“Having the knowledge of working with trims really elevated my [collection],” Olima said. “Trims are very important. Trims can make or break a garment; so can fabric.”

Olima honed his craft while working at Park Pleating for two years prior to launching his collection. The well-known Los Angeles company creates trims and fabrics for designer collections such as Juan Carlos Obando and Rodarte. Olima also credits L.A. Trade-Tech for his knowledge base—as well as his grandmother, who helps him create the collection.

For Spring, Olima departed from the dark “Dia De Los Muertos”–inspired look of his Fall collection but maintained his couture edge. In a complete 180-degree turn, the Spring collection, titled “Paraiso,” is made in a palette of light gray, white, nude and soft pink. “I knew people would expect me to do the same thing as I did with my dark collection,” Olima said. “I like to keep people excited, so I felt like taking a risk.”

The designer created a light, weightless feeling for the line, which debuted on the runway during the recent H. Lorenzo fashion show at the Beverly Hills Fashion Festival in Beverly Hills. Organza, light wools, four-ply silk, silk chiffon and silk/linen create airy, bird-like feather textures throughout the collection. Pieces such as a white jacket made from silk satin organza and silk metallic mesh feature his signature strip details.

Feminine, yet architectural, the collection explores the dichotomy of masculine and feminine silhouettes. A blouse with fabric strip details at the shoulder is paired with chic white trousers, and a white blouse with shoulder cutouts contrasts with delicate ruched leggings. And true to his affinity for celebrity, an avant-garde cocktail dress with elaborate strip details and a finale gown made with more than 50 yards of silk organza are both perfectly suited for the red carpet. Currently, the collection is custom-order only.