From Geek to Chic 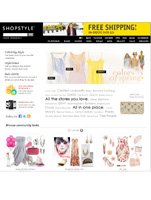 Even a year after a troubling recession, the Web still thrives as a marketplace that continues to experiment with new ideas and innovations. The pace of its growth is not expected to slow down. According to a recent forecast conducted by Forrester Research Inc., online retail sales is poised for a period of double-digit growth over the next five years. Forrester Research Inc. predicted U.S. online retail sales will grow at a 10 percent compound annual growth rate to reach nearly $249 billion by 2014.

Online apparel sales saw its strongest growth over the 2009 holiday season. According to a report by San Mateo, Calif.–based Web marketing-optimization firm Coremetrics, apparel retailers saw the biggest jump on Cyber Monday, with a 26.4 percent increase in the average dollar amount consumers spent per online order.

An expansive number of fashion sites coming out of California’s Bay Area and Silicon Valley—most founded by tech-savvy outsiders—are parlaying their technological know-how to take advantage of this growing market with Web-based fashion ventures.

And the next five years could usher in several advances for Web businesses, according to Anthony Wang, chief technology officer for San Francisco–based fashion e-tail site Tobi.

One such emerging technology could be augmented reality—an interactive way to simulate imagery and graphics onto a physical environment.

Last year, Tobi applied augmented reality to its “Fashionista” virtual dressing room, where customers can use a Web cam image of their bodies to try on garments to check style and fit. What makes the Fashionista unique is that it captures real-time images with personalized products using live Web footage of a customer rather than relying on a static photo or generic avatar.

While it remains to be seen how technology such as the “Fashionista” virtual dressing can be monetized, Wang said Tobi experimented with augmented reality because the company wants to be a leader in innovating the online fashion user experience.

Sukhinder Singh Cassidy, chief executive officer of fashion social-networking site Polyvore, predicts that companies will continue to work on the elements that are missing from shopping online.

“I think for the future of fashion online, it is about bringing the thrill of discovery and serendipity into e-tail shopping, as well as leveraging real-time data (e.g., top trends, products, sites, brands) into insights for consumers and brands,” Singh Cassidy said.

Polyvore, based in Mountain View, Calif., allows users to unleash their inner Rachel Zoe and play personal stylist. Users create inspirational collages, called sets, featuring a lookbook of products with a creative flair. Most of the pieces are introduced to the Polyvore database by users, according to Singh Cassidy.

Since launching in February 2007, Polyvore has grown to garner 6 million unique visitors per month, and its number of registered users has reached 1.2 million.

Polyvore licenses its set-making technology to retailers and brands as an e-commerce shopping tool and in partnership for contests with companies such as Barneys New York. Singh Cassidy declined to disclose Polyvore’s total revenue but did say revenue is drawn from display advertisement and affiliate programs with brands and retailers. (According to a recent profile in The New Yorker, Polyvore is not yet profitable.)

Manish Chandra, founder and chief executive officer of Sunnyvale, Calif.–based social shopping site Kaboodle, believes online fashion will draw a deeper impact in the physical world through mobile technology, fueled by mobile devices such as the Apple iPhone, iPad and the Android phones.

Kaboodle, a division of Hearst Digital Media, launched in 2006 and currently receives about 16 million unique monthly visitors, with 1 million registered users, according to Chandra.

Kaboodle sets out to provide a space to connect people with products and facilitate a sense of discovery, said Chandra. Kaboodle partners with retailers across the board—from small indie boutiques to multi-national retailers, according to Chandra.

In January 2010, Kaboodle underwent a relaunch to upgrade its product-discovery engine to allow users to search and interact with more than 6 million products with more real-time functionality. Users can see what products other shoppers are browsing and book marking as searches happen.

Through its proprietary technology, Kaboodle can cluster and aggregate all activity from a single brand to its own “Brand Page.” A brand or retailer can also sign up with Kaboodle to manage its own page.

“We provide them with a self-serve administrative interface that allows them to create and manage their own presence within the site and to engage with the community,” said Kaboodle Chief Marketing Officer Shari Gunn.

Kaboodle maintains affiliate relationships with a large number of retailers and earns a sales commission when a user clicks through from Kaboodle and purchases a product. Kaboodle did not disclose how much revenue is gained through its sales.

“User-generated content can be a low-cost business model that hasn’t been tapped into before in the field of fashion,” said Helen Zhu, co-founder and chief executive officer of San Francisco–based social-networking site Chictopia. “Within the last few years, more brands have come to us with that awareness of this type of resource, and it’s definitely taking off and the fashion industry is accepting it.”

Chictopia is an online community of stylish fashionistas all coming together to share style tips and perfectly put-together outfits and seek inspiration. Chictopia hatched from the idea of wanting to provide a platform of what looks good on an individual.

Chictopia launched in April 2008 and currently has 100,000 registered members and receives about 700,000 unique monthly visitors and 10 million page views a month.

The combination of cross-collaboration and an entrepreneurial spirit are helping to shape the future of fashion technology—and fashion retail.

“Start-ups attack the same problem in different ways, ultimately driving the evolution of the market,” Singh Cassidy said. “We’re not fighting for the same dollar but finding ways to grow the size of the existing online shopping pie collectively.”’Ad’ it up

This collective movement toward online expansion does not seem to follow a set course or traditional business models, and e-tailers and e-commerce companies are exploring more interactive ways to disseminate product information and engage consumers, often through rich marketing campaigns.

“ShopAds opened up the possibilities for e-tailers to become more innovative in ways to acquire new fans,” said Moxsie Chief Executive Officer Jon Farhner. “We are noticing that the ways we advertise and use our social media have evolved. The guard is down as long as you continue to contribute in a native tongue and are not the Web version of a door-to-door salesperson.”

San Francisco–based shopping site ShopStyle, a division of Sugar Inc., operates ShopSense, an affiliate program that allows both consumers and industry companies to place interactive shopping ads on their respective sites. ShopSense will track the clicks from the user site to the retailer, and the user can be paid for the traffic it drives to the e-tailer.

The ShopSense ads display a series of products based on “Editor’s Picks” by the ShopStyle team; “Trends,” which are derived from popular searches; “On Sale,” which are also derived via popular searches; and “Contextual,” which looks for brand names and keywords on the page to show relevant ad content.

Companies such as The Gap and Banana Republic and online publications such as Glamour, InStyle and Style.com have utilized the ShopSense program.

Product content is drawn from ShopStyle’s existing partnerships with more than 400 retailers and brands.

Moss said revenue is gained through a combination of commission-based and cost-per-click depending on the partnership with the retailer. Moss did not disclose how much revenue is gained. “We see a higher level of engagement with these [interactive] ad units than traditional banner ads, and the ability for publishers to monetize at a higher CPM [cost per thousand impressions] than ad networks,” said ShopStyle founder and general manager Andy Moss. “Our ads also look much more attractive on the page than typical ad network fare, especially for sites and blogs focused on fashion.”

Social-networking sites seem poised to continue to upend the traditional flow of information and give consumers a platform to discuss their fashion viewpoints, according to several Web execs.

Web companies are easing the fashion industry’s initial resistance to social media and allowing more brands and retailers to embrace social networking—through sites such as Twitter, Facebook and YouTube—to enhance awareness and get one-on-one feedback with consumers.

“We are effectively using Twitter to notify customers of the launch of new products and designers, as well as when hot products are back in stock,” Farhner said. “After all, Twitter is a status-update tool. Many e-tailers still don’t get that. We also hold tweet contests and even talk about subjects like music and food to our followers. [It’s] not the typical way to sell indie designer clothes, footwear and accessories, but we feel things are changing right before our eyes, and we have communication and relationships with our Twitter followers to back that up.”