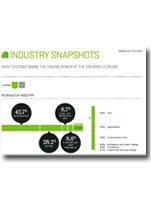 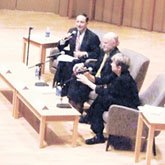 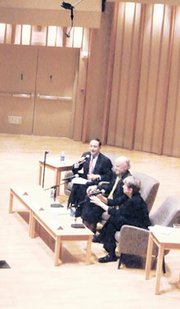 In Southern California, one in every six persons is employed either directly or indirectly in the creative economy.

That was among the findings in a recently released report from the Otis College of Art and Design.

The report, titled “2010 Otis Report on the Creative Economy of the Los Angeles Region,” was prepared for Otis by the Los Angeles County Economic Development Corp. and was presented at a Nov. 10 conference at the Colburn School in downtown Los Angeles.

According to the report, the creative industries in the region currently employ a total of 835,000 people directly and indirectly. (The report defines the creative field as architecture/interior design, art galleries, communication arts, digital media, entertainment, fashion, furniture design, industrial design, toys, and visual and performing arts. A direct job is defined as a job within one of those 10 industries, and an indirect job includes everyone employed by companies that supply creative industries, as well as producers of consumer products who sell to both the direct and indirect employees of the creative economy.)

“This is a big-time number; [it’s] a really important sector,” said Nancy D. Sidhu, chief economist for LAEDC’s Kyser Center for Economic Research. Sidhu highlighted the report’s key findings, including the economic impact of the creative economy—$286 billion—and the amount of state and local taxes generated—$4.6 billion—by the creative industries.

The report also includes a five-year projection, which forecasts continued growth for the creative industries.

“By 2014, we expect the creative industries, in total, to have grown,” Sidhu said. However, she countered the rosy outlook with some words of caution for the fashion industry. Although the LAEDC anticipates growth in fashion design, it forecasts apparel manufacturing to remain flat over the next five years.

Event sponsors included the James Irvine Foundation, the Department of Cultural Affairs of the City of Los Angeles, Mattel and Nike.

Otis President Samuel Hoi kicked off the event, which drew a crowd representing all aspects of the region’s creative industries.

“With all of you here, it’s easy to imagine a better future for our community,” Hoi said.

The event also featured presentations by James Canales, president and chief executive officer of the James Irvine Foundation; Rocco Landesman, chairman of the National Endowment for the Arts; and Ann Markusen, economist, professor and director of the project on regional and industrial economics at the Humphrey Institute on Public Affairs at the University of Minnesota.

The “2010 Otis Report on the Creative Economy of the Los Angeles Region” is available online at www.otis.edu/econreport. In addition to the report, the website features a video overview of Southern California’s creative industries and their contribution to the economy. A video of the Nov. 10 event, including the guest speakers’ presentations, is also being posted on the site later this month.—Alison A. Nieder