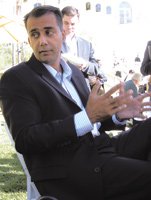 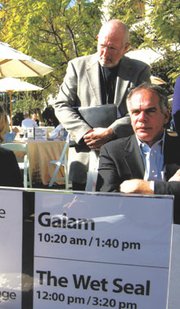 That’s in addition to the 105 stores the Warrendale, Penn.–based company has opened, bringing the total stores to 628 as of the end of the third quarter of 2010.

The retailer was one of 116 prominent companies outlining plans for the upcoming year at the 13th Annual ICR Xchange investors’ conference, held Jan. 11–13 at the palatial St. Regis Monarch Beach Resort & Spa in Dana Point, Calif.

And Rue 21 is not alone in its ambitious expansion plans. The Wet Seal Inc., Joe’s Jeans Inc., True Religion Inc. and Guess? Inc. all announced retail expansion plans at the conference, where retailers and retail analysts discussed coming opportunities and challenges against a backdrop of a breathtaking view of the Pacific Ocean.

Despite the expansion plans, rising raw-material and sourcing costs—and their impact on consumer demand—were at the forefront of everyone’s minds.

“Increased sourcing costs was the main topic of discussion as it becomes reality by fall to holiday ’11,” Christine Chen, an analyst for financial-services company Needham & Co., wrote in a recent research note. However, retailers can beat any challenge if they follow a mantra much repeated at the conference, according to a research note published by financial-services firm B.Riley & Co. “Newness of merchandise is driving business, and the consumer is willing to pay up for unique, authentic product,” the note said.

Offsetting rising costs with the right product in the right location was key for Rue 21, which sells fast-fashion apparel to young women and men.

One growth area for Rue 21 is selling accessories, which will give the company an expanding market that is not weighted down by price increases for cotton.

Foothill Ranch, Calif.–based The Wet Seal is focusing on denim to help grow the business. The company will build its denim program to make it a business that will generate revenue for the entire year, instead of just during the back-to-school season, when denim is most often purchased at Wet Seal stores.

Steve Benrubi, Wet Seal’s chief financial officer and executive vice president, said the company will open 60 Wet Seal stores in 2011. The stores will debut in prominent malls as well as in power centers or retail areas anchored by a mass retailer.

This ICR marked the last time that Ed Thomas, former Wet Seal chief executive, appeared at the conference on behalf of the retail chain. Susan McGalla assumed control of the company on Jan. 18. McGalla will find a healthier Wet Seal, Thomas said, but the economy is still rough. “It is still an aggressively promotional environment; we still expect a lot of volatility,” he said.

During the Joe’s Jeans presentation, Hamish Sandhu, the Los Angeles–based company’s chief financial officer, said the company will continue its development of non-denim lines—woven shirts, trousers and T-shirts. The company forecast it would open 11 stores in 2011.Cut stores, add staff

But not everyone is banking on more stores in 2011. During the Pacific Sunwear presentation, the retailer’s chief executive, Gary Schoenfeld, confirmed the Anaheim, Calif.–based surf and skate retailer will cut its store count from 870 to 850 in the next year. He also gave a frank assessment of what PacSun needs to do to reclaim its position as one of the most popular retailers at the mall.

He told analysts and investors that he rejected the first offer by PacSun’s board to lead the company more than 18 months ago. “I hated what I saw. I actually said, ’No, thank you.’ I wasn’t interested,” he remembered.

But PacSun’s board of directors did not give up. They thought Schoenfeld, then chief executive of Vans, was the right candidate. Schoenfeld became intrigued with the challenge of rebuilding a big company and saw a rich future for action-sports apparel.

After rebuilding his team, the next steps will be rebuilding the business in several key areas. PacSun plans to re-establish its dominance as the go-to place for action-sports brands. Proprietary PacSun labels such as Bullhead and Kirra will continue to be available. The company also plans to re-enter the men’s footwear and accessories business. And PacSun plans to build its juniors business and develop a more compelling in-store experience. Schoenfeld said some of his initiatives would show results by spring or summer.

He said he also hopes to change some of PacSun’s leases. “Our real estate costs are higher than sustainable. We need to continue to find ways to solve that and bring that back in line with a basis that can make us profitable in the long term,” he said.Guess who’s going to China?

Guess Chairman Paul Marciano said international sales will be an important driver of company growth. He forecast Guess will build more than 350 stores in China in the next four years.

Another important territory for the Los Angeles company will be Northern Europe. “We have not touched it,” Marciano said. Guess has not opened its own stores in Germany ever in its 30-year history, although the brand is sold in German multi-line stores.

The presentation was Marciano’s first formal investors’ presentation in 14 years. He told the crowd how he built the Guess brand.

The most important building block is developing a logo that will intrigue people and command attention, he said. “First you create an image. From there, you have a brand. It gives us strength to do an apparel company,” he said.