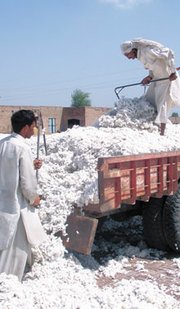 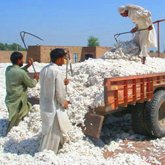 As one of the largest denim producers in the world, Levi Strauss & Co. wanted to make a difference in people’s lives that extended beyond fashion. As part of this strategy, the company is releasing 2 million pairs of jeans made with sustainably grown cotton to help reduce the company’s environmental impact and improve the lives of cotton farmers.

The new jeans are made of a blend of “Better Cotton,” grown as part of the Better Cotton Initiative, and other fabrics. This mission first began in 2007, when the company performed a lifecycle assessment to see what the environmental footprint was for a single pair of jeans—from growing the cotton for the denim to design, production and wear until the consumer ultimately discards them. Going into the study, the team assumed it would be the continual washing by the owner throughout the life of the jeans that caused the most environmental harm, but they were surprised to learn it was actually growing the cotton that had the most impact.

Cotton is a “thirsty crop” that accounts for 49 percent of the water used during the lifecycle of the jeans, according to Brianna Wolf, senior specialist for Levi’s Office of Global Environmental Sustainability.

Not only does growing cotton using traditional methods have negative environmental impacts, but there are also harmful social impacts, Wolf said, such as using expensive pesticides, as well as forced labor and child labor.

“When we started paying attention to cotton, we discovered all of the social impacts related to cotton,” she explained.

After realizing the company could extend its influence “way outside the cotton field,” Levi’s joined the Better Cotton Initiative in 2009, Wolf said.

The nonprofit aims to promote improvements in cotton cultivation by working with non-governmental organizations, government agencies and companies such as Levi’s, H&M and IKEA to reduce the negative environmental and social impacts of the crop. Their initiatives focus on teaching farmers crop-growing practices that require less water and fewer pesticides, improving labor standards and increasing financial profit for farmers. Different growing techniques and varieties of cotton seeds are also used to increase the farmers’ yield.

While the cotton in the new jeans is not technically considered organic because some chemicals may be used, Levi’s is focused on holistic sustainability and going beyond just the environment to help people, Wolf said.

Economic viability for small, vulnerable farmers is part of that equation, she explained. The majority of the farmers involved with the initiative hold less than two hectares and reside in Pakistan, India, Mali and Brazil. According to the results of a Better Cotton Initiative pilot study, Better Cotton techniques raised farmers’ profits by up to 69 percent and reduced water consumption and pesticide use by one-third.

Levi’s and the Better Cotton Initiative are looking at ways to expand the initiative to the United States, but for now, the initiative is only involved with farmers in those four countries.

Marci Gibbs, director of the Sustainable Cotton Project, a farm-based nonprofit based in Winters, Calif., that works with California cotton growers to reduce pesticide use and develop a cleaner cotton industry, said Levi’s should be commended for its efforts.

“You have to applaud them because it’s easier to buy finished goods or finished fabrics and not pay attention to where it was grown or how it was grown. ... We’ve been at this for 10 years, and we know how difficult it is to move [sustainable] cotton through the supply chain. We’re really thrilled that Levi’s and some of these bigger companies are paying attention to how the cotton is being grown. They’re really making a big effort to increase the sustainability of the products they use.”

The 2 million pairs of jeans include both Levi’s and the company’s Denizen brand, and they will be released across all regions, including North, South and Central America; Europe; and Asia.

Initially, the jeans made with the Better Cotton blend will not be marked by individual Better Cotton labeling, so as to avoid creating a niche market that drives the price up and to give time for the supply to meet the demand, Wolf said.

They are in stores now and will continue to be rolled out through the end of the year, with the hope of increasing the amount in the coming seasons, she said.