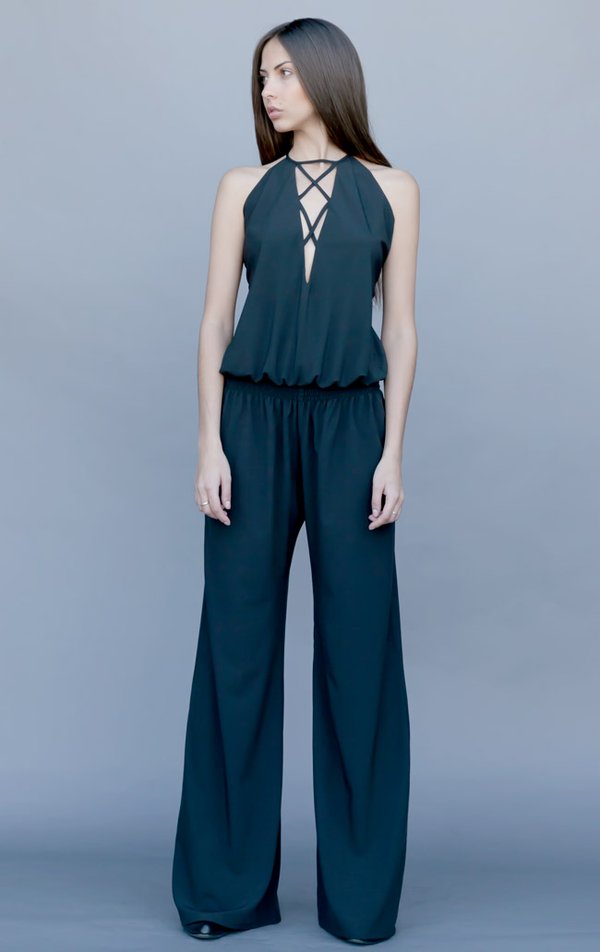 Brand Building on Made in America Foundation

LA LABEL: Every piece in the Single collection has a label that reads “Single Los Angeles,” and the company’s hangtags read “Made in USA.”

When Gala Inc. founders Galina and Michael Sobolev began shifting their production for their contemporary line, Single, back to the United States about six years ago, there were several compelling reasons to bring manufacturing home.

Domestic production gave them the ability to produce quickly and fill reorders. There is an existing production base in the region and the move could help retain U.S. jobs, which was important for the Ukrainian-born Sobolevs, who both emigrated as children from the former Soviet Union, meeting many years later in Los Angeles.

The company had always kept a portion of its production local to allow for quick turn and reorder business. “The majors really loved that we could do that,” Galina Sobolev said. “[But] at one point when the production of all our silks got really huge, we were doing maybe 60 percent domestically and our China production went up to 40 percent.”

The husband-and-wife team began investigating what it would take to move all production back to America.

“We started pricing some of the product,” Galina Sobolev said. “The difference was so insignificant that we decided to absorb it into the cost. [We said,] ‘For the amount of profit that we’re going to lose by producing in the U.S., we’d rather forgo the extra money and create jobs here for local factories.’”

These days, 100 percent of the Single collection is produced in the United States with the exception of a few labor-intensive items in the Holiday collections, such as beaded dresses made in India. And the move has paid off—particularly among Single’s international retailers.

Domestic manufacturing has allowed the company to fill reorders when a style suddenly takes off for a retailer. “Our edge is the fact that we can turn goods in two to three weeks, which nobody in China can do,” Sobolev said. “For clients such as some of the onliners, they can chase business.”

That was the case recently for one retailer that purchased a few stock inventory pieces from a previous collection to sell online. The retailer bought 18 units of one dress style—“That’s all we had in stock,” Sobolev said—and oversold it by 390 units. Fortunately, Sobolev was able to secure the fabric from the original local vendor and quickly put the reorder into production.

“From the day of the order to the day it [left] our door it was 11 days. And we just got another reorder from them for, I think, 460 pieces of the same dress,” she said.

“They had an 83 percent sell-through, and they even sold out of it online,” she said. “We were able to do a quick reorder for them for 60 or 80 units. Just the fact that we can do this so quickly and they’re able to reorder, it’s very exciting for them. This is the kind of edge domestic manufacturing allows us.”

Every piece in the Single collection has a label that reads “Single Los Angeles.” Each item has a hangtag that reads “Made in USA,” although Sobolev said she’s planning to change that to read “Proudly Made in USA.” The linesheets, lookbook and website will also soon have “Made in USA” prominently displayed. At the Single showroom in Atlanta, the sales staff display signs that read “This Collection Is Made in USA.”

“The buyers get very excited when they find out that the collection is Made in USA—especially in our Midwest territories and in the South and Southeast,” Sobolev said. “At the regional markets, it’s the first thing my sales team tells every buyer that walks in.”

Sobolev frequently attends the regional markets in Dallas and Atlanta, as well as the New York Market five times per year.

“In New York, nobody cares where things are made, honestly. It’s all about the price,” she said. “I’m getting the most support for made in USA from Texas, from Louisiana, from specialty stores in the Carolinas.”

Much of the Single collection is made using European fabrics, but Sobolev looks for domestic resources, as well. “We have one lace that we have been running for about 10 years now. It’s a very vital part of our Holiday collections,” she said. “It’s made in this little factory in New Jersey. The machine itself is about 200 years old [and] imported from England. And it’s a beautiful re-embroidered lace. It looks like [a high-end Italian] lace, but it’s a lace that can be worked into our contemporary price points.”

Sobolev said some retailers ask if the company will source a style overseas to reduce the price.

“Of course, everyone is price-sensitive these days,” she said. “But sometimes we have to put our foot down and say, ‘Sorry, we can’t make it at that price. However, we can do it at this price, and you can have a product in your store that says ‘Made in USA.’”

Founded in 1994, Single sells in higher-end department stores such as Saks Fifth Avenue and Neiman Marcus, as well as higher-end specialty stores and boutiques around the world such as Tootsies in Texas, Montmartre in New York and Mendocino and Want in Canada. Although the company started as a sportswear maker, over the years it became well known as a dress resource. For Fall, Sobolev is returning to the brand’s sportswear roots with a collection of luxe separates Sobolev calls “California dress-up casual.”

“If you look at the way people are dressing today, it’s a lot easier for a girl when she’s going on a date to run in and buy two new blouses to wear with her favorite leather legging or skinny jean,” she said. “Unless she needs a dress for a specific occasion, I’m seeing more of a turn to an easy, casual kind of dressed-up sportswear. It doesn’t mean we’re not doing dresses anymore. There’s still two or three dresses in every group, and we still have our assortment for our customers that are very much into dressing that career gal.”

In addition to Single, the company has a strong private-label business manufacturing for a handful of brands and retailers.

The company also produces exclusive Single collections for retailers such as the White Single Dress label, which sells at Rue La La.

“We do thousands of structured dresses for Boston Proper, and we have for the last 15 years,” Sobolev said. “That’s the beauty of being able to turn a 600-unit reorder in three to five weeks domestically.”

The Sobolevs’ private-label business has grown organically as word gets out that the company is a resource for brands looking for domestic production. “We have become kind of like the Intel of the fashion community,” Sobolev said. “[People will say,] ‘You want to make something domestically? Call the people at Single. They can turn things in two to three weeks.’”

The company recently added plus sizes for Saks and has since expanded the offering to other retailers, such as e-tailer Madison Plus. Although still in the early stages, the plus-size capsule collection fills a void in the contemporary market for plus sizes.

“There aren’t a lot of choices for the [contemporary plus-size] consumer,” Sobolev said. “We really invested in developing the blocks, and we got a great fit model.”

“I would love to turn this into more of a proper business—have it not just be a small capsule segment but really expand it on various levels,” she said.

Another new concept in the works is the Single men’s underwear line developed by the Sobolevs’ 24-year-old son, Julian. Still in the test stages, the collection features the Single name and an American flag on the elastic waistband.

Just as Single is committed to domestic production, Galina Sobolev said she wishes more manufacturers and retailers would commit to Made in America product. Retailers, in particular, could highlight American-made products in their stores, she said.