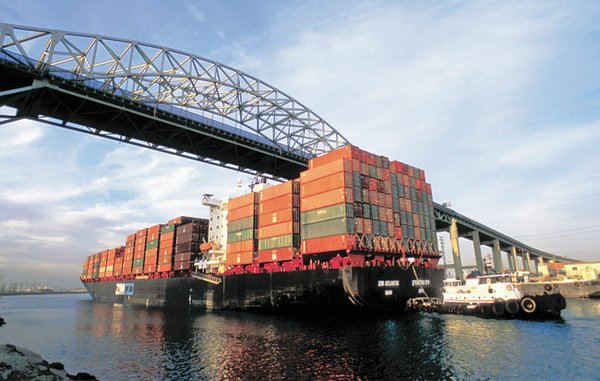 CLEAR CRUISING: A cargo-container ship piled with imports sails into the Port of Long Beach.

For nearly two weeks now, Ram Kundani has been waiting to receive seven cargo containers filled with tops, sweaters and dresses shipped from Bangladesh, China and Indonesia to the ports of Los Angeles and Long Beach.

But some 10 days after their arrival, the containers on Oct. 21 were still stacked on container vessels as gridlocked docks made it difficult to unload the big metal boxes.

“The problem is, once they are off the boats, God knows when we will get them,” he said, noting that after the goods are unloaded, they are difficult to extract from the docks because there are so many cargo containers stacked up, one behind the other.

Kundani said his retail clients, who are department stores and discount stores across the country, have been sympathetic because just about every apparel importer bringing goods through the West Coast ports is experiencing the same problem. But as the holiday shopping season approaches, retailers are getting nervous and will start to discount goods to clear them out before the season ends.

The discounted price, called markdown money, chips away at the total price apparel manufacturers ultimately are paid for their goods. “The majority of my things were to be delivered by Sept. 30,” said Kundani, who has worked for nearly 40 years at Los Angeles–based B. Boston & Associates, where he is now the vice president. He estimates he could lose at least $2 million or more. “By now the retailers should have these goods in their warehouses because it takes a month to get them from the warehouse to the stores. This is the worst I have ever seen it.”

The congestion problem at the ports has been going on for at least two months, but no one expected it to last this long. And no one anticipates an immediate fix.

As of Oct. 22, there were 10 vessels anchored outside the Los Angeles/Long Beach breakwater, waiting to move into berths. Five of those were cargo containers, which is very unusual, said Capt. Kip Louttit, executive director of the Marine Exchange of Southern California, which acts as a sort of traffic controller for ships. “It is extremely odd to have this many ships anchored beyond the breakwater or any cargo-container ships at all. There should be zero container ships there,” Louttit said.

Some shipping carriers are now rerouting their vessels through the Panama Canal to ports on the East Coast, where the problem isn’t quite as acute. But until its expansion is completed in mid-2015, the Panama Canal can’t handle ships that carry more than 8,000 20-foot cargo containers. Bigger and bigger ships carrying 12,000 and 13,000 containers are now becoming the norm on the Trans-Pacific route from Asia to the West Coast, which is contributing to the congestion problem.

Other carriers are diverting their ships from Southeast Asia through the Suez Canal and then on to the East Coast. “Virtually every importer and exporter in this country is looking for alternatives to the West Coast,” said Peter Friedmann, counsel to the Pacific Coast Council of Customs Brokers and Freight Forwarders Association.

Some shipping lines are having their vessels sail at a slower speed, known as slow steaming, to stagger the ships’ arrivals and hopefully encounter a less frenzied situation upon docking.

“Ocean carriers will begin to slow steam to stagger vessels into the port due to congestion,” said a DHL Logistics spotlight newsletter distributed on Oct. 8. “These [congestion] conditions have a direct impact on [truck] driver productivity in a market that is critically short of truck capacity. While there are variations by terminal, truckers routinely incur four- to six-hour turn times. The delays in local cargo availability average three to 10 days or longer, depending on the marine terminal and the appointment availability. Delays in retail departures due to rail car and labor shortages vary widely by carrier and terminal, ranging from four to 20 days, due to congestion.”

Several steps are being taken to increase the chassis pool, which is one of the primary reasons cargo is so backed up. Ever since many of the shipping lines got out of the chassis business to save money, chassis distribution at the terminals has been uneven. Chassis, which are the wheels attached to containers to move them, are now provided by independent companies.

Even so, chassis distribution is unpredictable. Some terminals have too many chassis. Others have too few, which means that truckers scheduled to pick up cargo at one terminal often have to race off to another terminal to find a chassis. When they return, they sometimes find the container is blocked behind other cargo containers.

On Oct. 10, it was announced that two truck chassis providers, DCLI and TRAC, would add 3,000 chassis to the local fleet over the next few weeks to help with the congestion problem.

A few days later, the Port of Long Beach Board of Harbor Commissioners directed its staff to develop plans for buying and providing thousands of truck chassis for congestion relief during peak periods, which is probably a first. Ports aren’t normally in the chassis business. But the Long Beach port’s new executive director, Jon Slangerup, who previously was president of FedEx Canada, believes the port needs to be more in the logistic coordination business.

Meanwhile, to clear back-logged containers, the Port of Los Angeles has zeroed in on extra space to store containers outside the docks while they await pick up. Spokesman Phillip Sanfield said the Port of Los Angeles has identified a 14-acre site on Terminal Island as well as another spot there for temporary extra storage space. And many terminals have set up extra “hoot owl” shifts with temporary laborers earning overtime pay to work between 3 and 8 a.m., when most gates are closed. The workers are moving containers around for easier access, said John Cushing, president of PierPass, set up in 2005 by marine terminal operators to alleviate daytime congestion and encourage more truckers and importers to pick up their cargo containers between 6 p.m. and 3 a.m. and not incur a daytime-pickup fee that is as much as $133 for a 40-foot container.

Adding to this “perfect storm” of port problems is the fact that the International Longshore and Warehouse Union, which represents 13,600 longshore workers at 29 West Coast ports, and the Pacific Maritime Association, which represents the marine terminals and cargo carriers that employ them, are still negotiating a new six-year contract that expired July 1. Longshore workers remain on the job in Southern California, but there have been work slowdowns and walk-outs at the Port of Portland in Oregon and at the Port of Oakland near San Francisco.

There are many issues that need to be resolved quickly for cargo to flow through the two ports in Los Angeles and Long Beach. No one is sure if this will happen soon, but if the issues aren’t resolved, experts warn that cargo will go elsewhere. “As the season starts to wind down a bit, it will be important for the carriers to get this problem under control,” said Mark Hirzel, president of the Los Angeles Customs Brokers and Freight Forwarders. “They need to do this before the next peak season starts, which is right before Chinese New Year in February.”