Inside the North Hollywood, Calif., headquarters of footwear designer Calleen Cordero, workers are sorting through leather hides in a rainbow of shades while others are tapping hundreds of studs into cut leather pieces or affixing padding to insoles. In the lasting department, a worker is hand stretching the leather to fit the shape to the foot, while in the art department, workers are finishing metal trim pieces to give them a vintage look. In the next room, a worker sculpts and sands wooden heels to perfectly fit each upper.

Everything is done by hand to make the sandals, clogs, boots, belts and handbags that are part of the Calleen Cordero collection. 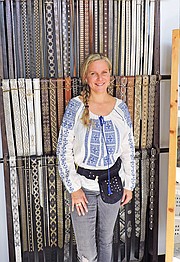 “It takes 36 pairs of hands to make one shoe,” Cordero said. “We make all the components.”

Each shoe starts with a flat piece of sustainably forested alder wood, which is sculpted into the shape of the platform sole and then hollowed out to reduce the weight of the finished shoe. The arch support is then hand sanded to cradle the foot and perfectly match the upper.

“Shoes are like architecture,” Cordero said, adding that all the heels and wedges are sculpted by hand and the leather sandals are handmolded as well. “Every single heel will be hand shaped—it’s such precise work.”

When Cordero designs a shoe, she considers how it will move and rock when worn.

“These shoes will last you 20 years. It’s not disposable footwear,” she said. “It’s like a collectible.”

For the past 17 years, Cordero has been handcrafting shoes in North Hollywood. Over the years, the shoes have evolved from Cordero’s first design, which was inspired by a vintage studded belt. 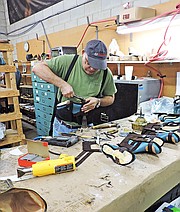 PRECISION WORK: According to Cordero, it takes 36 pairs of hands—or steps—to make one pair of shoes. In the designer’s North Hollywood factory, 50 employees sculpted heels and wedges, mold leather sandals, tap hundreds of studs into cut pieces of leather, and hand-stretch lasts and hand-finish the trim. “Shoes are like architecture,” she said. “It’s such precise work.”

“What we do now is on a whole different level,” she said. “It’s very labor intensive. I don’t even look at it as studwork.”

Currently, there are 50 employees working in a 10,000-square-foot space—Cordero’s third in North Hollywood since she started in 1999. And the business is bursting at the seams.

In February, Cordero will open a 2,000-square-foot space next door to her existing factory, which will house the handbag manufacturing and a planned upcycled collection. The designer plans to begin using the scrap leather and wood left over from the manufacture of the shoes and handbags. She is also in the process of sourcing high-end faux leather. “We’re definitely going to do a vegan line,” she said. “A lot of customers are asking for it.”

All of this handwork and meticulous detail takes time, but Cordero isn’t mass producing footwear. The designer describes the work done on her wood soles as similar to woodcarving and the finished pieces as jewelry-like. The shoes are only sold in independent boutiques as well as Cordero’s own boutiques in West Hollywood, Calif., and Los Angeles’ Studio City neighborhood and on her website at www.calleencordero.com.

Often she will work with her retailers to custom design styles that are a perfect fit for their customers and ensure that the product they have in their stores is unique and tailored to their clientele.

“I get inspired by getting creative with customers,” she said. “I’ll work with retailers and I’ll say, “Tell me, who is your customer?’” 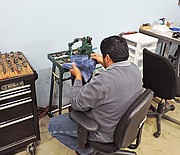 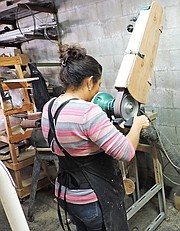 Before launching her own collection, Cordero spent years in the footwear industry working as a merchandiser and buyer for footwear boutiques such as 22 Steps in New York and in sales at Fred Segal Feet in Los Angeles. She worked for large footwear manufacturers including Esprit (where she worked with Sam Edelman), Kenneth Cole, Doc Martens andVogue Shoe. (The now-shuttered Vogue Shoe had, at the time, 300 employees producing footwear in-house at its factory in Monterey Park, Calif., as well as a vast archive of footwear patterns that dated back over the company’s 50-year history.)

A vintage studded belt found at Hollywood Trading Co. inspired Cordero’s first design. “I said, ‘This belongs on a shoe,’” the designer recalled. “I knew in my heart I was going to make shoes with studs.”

But first Cordero had to find a factory to produce the shoes. Cordero knew there were small shoe factories in North Hollywood, many making custom shoes for exotic dancers.

Still, she said, “It took a long time to find someone to make my shoes. I went to four different leads for factories. They all laughed at me.”

Eventually, she found a footwear manufacturer working out of a 900-square-foot garage who was willing to take on Cordero’s designs—and to agree to her conditions: “I told him I wanted to make the shoes with him,” she said.

Initially, Cordero produced her shoes in partnership with Zip Stevens, the owner of Hollywood Trading Co., under the Calleen Cordero for HTC label before branching out on her own. She took the shoes to the Coterie trade show in New York, landing orders from retailers such as Madison in Los Angeles. “It was a home run,” Cordero said. “Everyone wanted the collection.” 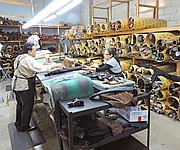 And the business took off, Cordero said. “We went from zero to $5 million in three years,” she said. But Cordero said she didn’t have the infrastructure to support that rapid growth, so she scaled back her business to concentrate on key accounts while she built the business in a more sustainable way.

“I really believe in manufacturing here,” Cordero said. “There’s so many factors to look at—sustainability, your footprint, integrity.”

She said she’s looking forward to the move to the new space and the chance to continue to grow the company without sacrificing the work atmosphere she has created for herself and her employees, some of whom have been with her since the beginning.

“I want to come to work in a creative environment where everyone is respected,” Cordero said. “We’re a big family.”