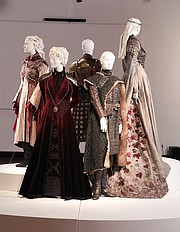 Costumes from “Game of Thrones”

A little over a month ahead of the 71st annual Emmy Awards, which will be held Sept. 22, the FIDM Museum & Galleries at the Fashion Institute of Design & Merchandising hosted its unveiling of the 13th annual “Art of Television Costume Design” exhibition in partnership with the Television Academy. A private unveiling of the collection was held Aug. 17 on FIDM’s downtown Los Angeles campus to showcase more than 100 costumes from 23 television shows, 10 of which are nominated for Emmy Awards in costume design.

Costumes displayed throughout the exhibition represent television programming from a variety of genres including episodic series, limited series and variety programming. The museum’s curation of these exhibits illustrates the power of expanded media such as streaming options in addition to more-traditional broadcast and cable-television channels.

This year’s exhibition also includes costumes from television shows whose series recently ended, including “Gotham,” “Veep,” “Game of Thrones” and “A Series of Unfortunate Events,” adding an element of closure to storylines as well as a celebration of these works.

While the media frenzy surrounding the end of the HBO series “Game of Thrones” focused on the characters and their relationships, the FIDM Museum exhibition allows fans to gain a deeper understanding of the show through details in costuming. The series, which began in 2011, has been nominated for “Outstanding Fantasy/Sci-Fi Costumes.”

“‘Game of Thrones’ is a standout not only because it’s the final season but because it’s also the end of a story,” Nick Verreos, co-chair of fashion design at FIDM, said. “Costume designer Michele Clapton wanted to tell the end of a story wardrobe wise. With the coronation gown that Sansa Stark wears, it tells the full sartorial story of Sansa’s journey from being a frightened child to becoming a formidable monarch.” 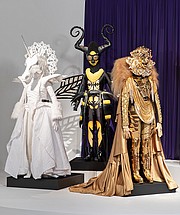 Costumes from “The Masked Singer”

Costumes within the exhibition also spoke to the social issues tackled within the programming. Nominated in the Emmy category for “Outstanding Period Costumes,” Lou Eyrich and Analucia McGorty, who worked on the FX Network’s “Pose,” used costuming to relay the just-be-yourself attitude found by the predominantly black and Latinx LGBTQI community within New York City’s underground ball culture during the 1980s, a turbulent time for this segment of the population in the United States.

“They felt left out of society,” Verreos said. “During the AIDS epidemic, [the balls] felt like a place to be at home, safe and fabulous.”

“Her clothing works as armor,” Verreos explained. “She wants to blend in—her clothing is wrinkled, nonchalant. She is covering up scars and using clothing as protection.” 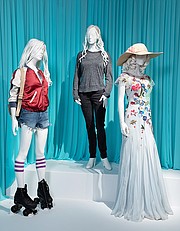 While these television shows provide audiences with glimpses into profound issues, there has been no shortage of levity within the costuming noticed by the academy. An exhibit showcasing Donna Zakowska’s costumes for the series “The Marvelous Mrs. Maisel” focuses on a particular episode in which Rachel Brosnahan’s character of Miriam “Midge” Maisel and her family travel to their familiar Catskills, N.Y., vacation destination.

Nominated for “Outstanding Period Costumes,” the stylish, brightly colored frocks play a strong supporting role in Mrs. Maisel’s world, but dressing the character in bright summer attire showed the audience the comfort that can be found in a return to a more innocent time.

“She is going back to her inner childhood through the bright, cheery springtime costume,” Verreos said. “The costume designer studied at the École des Beaux-Arts, where they instilled in students the importance of color, which she passes along onto the show.”

Another FIDM alumnus and Emmy Award recipient, Marina Toybina, is known for creating striking costumes that stand out with their designs but also their performance. Working on tour costumes for entertainers such as P!nk, Ariana Grande, Taylor Swift and Carrie Underwood, in addition to performing-arts shows “World of Dance” and “So You Think You Can Dance,” Toybina is now nominated for her work on the singing competition show “The Masked Singer” in the category of “Outstanding Costumes for Variety, Nonfiction or Reality Programming.”

Costumes from “The Marvelous Mrs. Maisel”

“The diversity is quite fabulous. You have costumes from very realistic to fantasy, contemporary to period, and you have whimsy,” Barbara Bundy, vice president of education at FIDM, said. “Television in today’s world is amazing with all of the new providers. It’s stepped up the game.”

Other Emmy-nominated costumes on display throughout the exhibition include the final nominee for “Outstanding Period Costumes,” “Fosse/Verdon” by Melissa Toth and Joseph La Corte; “Outstanding Fantasy/Sci-Fi Costumes” from “A Series of Unfortunate Events” by Cynthia Summers and “Good Omens” by Claire Anderson; and “Outstanding Contemporary Costumes” for “black-ish” by Michelle R. Cole and “Russian Doll” by Jennifer Rogien.

Notable costumes also on display for additional television series include “The Bold Type,” “The Chilling Adventures of Sabrina,” “Crazy Ex-Girlfriend,” “Future Man,” “The Haunting of Hill House,” “The Man in the High Castle,” “Native Son,” “Outlander,” “Shrill,” “The Umbrella Academy” and “Vanity Fair.”

By continuing its celebration of television costumes and designers ahead of the annual Emmy Awards ceremony, the FIDM Museum hopes to encourage in the public a deeper understanding of the intensive work that is dedicated to these designs.

“There is magic that can be created though television and costumes,” Bundy explained. “The costume creates what goes on in the story. If you watch something and the costumes are wrong, there is a disconnect—you don’t relate to the character. The costumes make the character come alive.”

Opened to the public Aug. 20, this year’s “Art of Television Costume Design” will be hosted Tuesdays through Saturdays at the FIDM Museum until Oct. 26. Admission is free. 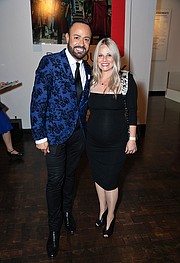 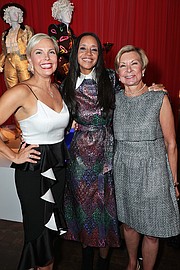