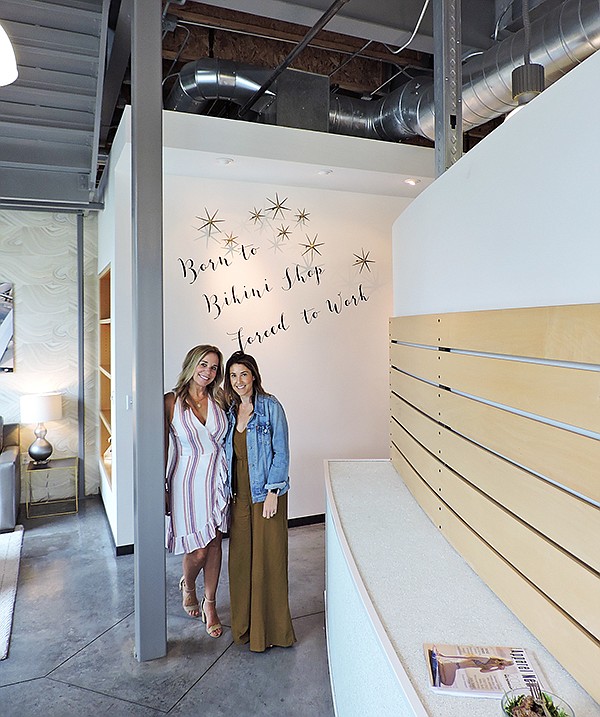 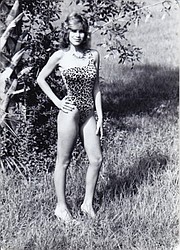 Wise pictured in Florida in 1995

“As a Midwest teenager, I loved escaping that dreary weather with my family on road trips to Florida, which we did every year,” she said. “The trips made me feel euphoric. I always felt happiest spending time in the sunny, warm weather while wearing a cute bikini.”

After graduating from high school, Wise packed her Volkswagen and set out to live in Florida. She quickly rekindled her romance with the state’s year-round summery weather, where she could wear a swimsuit every day, including her favorite—a teeny terry-cloth Jantzen bikini with side ties and a matching wrap.

Unfortunately, the move to Florida didn’t come with a plan for Wise’s future until her maternal grandmother—a keen Ohio businesswoman—had a talk with her granddaughter, who was becoming quite the beach bum. 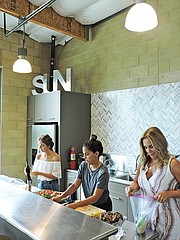 From left, Tricia O’Donnell, who works in customer service; Carolina Enchenique, who works in e-commerce, and Wise prepare a staff lunch.

“As an inspiring—but intimidating—businesswoman, my grandmother ran a great restaurant and built it into an empire after starting with only a few dollars,” Wise remembered. “One day she said, very excitedly, ‘You have to figure out what you’re doing with your life!’ She reeked of grit, and I love people with grit. She got me out of my comfort zone.”

This conversation was the impetus Wise needed to transition from loving swimwear into building a swimwear business. In 1999, she relocated to California, a place she considered to be “the heart of the swim and surf industry,” in order to cultivate her swimwear collection.

Swim for all seasons

While L*Space will celebrate its 20-year anniversary in 2020, Wise notes that she was dabbling in creating swim pieces before she launched her brand. Back then, swimwear wasn’t a consistent industry that demanded attention 12 months a year. After starting her business in a 1,500-square-foot office, Wise would have a gap of five months before the swimwear season came around again.

Due to the allure of travel and social-media promotion of young women hopping around the globe, Wise no longer has to wait for her favorite time of the year for people to snap up swimwear.

“We now sit on the retail floors 12 months out of the year,” she said from her office and warehouse, which occupies 24,500 square feet. “This new generation of women travel more than ever, and social media brought that to life.”

Through its heavy social-media presence, L*Space has capitalized on the explosion of promotional channels and influencers. Beyond partnering with influencers, the brand relies on its social-media channels to include its customers in the business as the demand for transparency continues to grow.

In fact, the easiest method of reaching the brand is through sending a message to L*Space on its social pages. Wise greatly values the consumer input that her social-media and marketing teams share with her, applying suggestions that are sourced from fans of the brand. 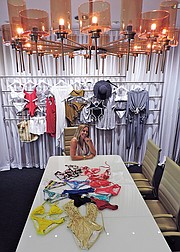 Wise sits among L*Space designs from the past 20 years

“Transparency is so important, and we try to be more transparent,” Wise said. “We talk one-on-one with consumers. We lean on them for feedback and read all of their reviews—it’s extremely valuable.”

As millennials and Gen Z remain less loyal to brands than Gen X and baby boomers, Wise knows that her team must show consumers the value of investing in quality pieces that are made to last. Citing her mission to promote a move away from fast fashion into a slower, quality-driven production process, Wise and her team are promoting a social campaign to “#BuyBetterWearLonger.”

The importance of properly wielding these marketing tools is crucial to reach the next generation of consumers, Wise noted, but as her company draws closer to this milestone anniversary she recognizes that L*Space has built a legacy.

“Watching how various generations wear LSpace amazes me the most,” she said. “I have met mothers who started wearing LSpace a dec­ade ago and are now bringing their daughters in to buy the brand.”

When Wise started her brand, she was a one-woman swimwear show who performed nearly every task necessary to create L*Space. She credits her ability to grow the brand to her undying passion for swimwear and her early manufacturing partners in Orange County, Calif., with whom she still works today, splitting production between a California factory and a business in China.

“Back in the day, I had to do it all myself,” she said. “When I came to California, everything came to life. The factory that I first partnered with is located in Orange County and is owned by a couple who financed it and believed in me. I wouldn’t be where I am without them, and they’ve become my friends.”

Over the years, L*Space has grown to include a strong team of 42 specialists in everything from design to marketing. By building a team that comprises women who share Wise’s passion and vision, the founder has learned to trust her employees and partners.

“Our team is everything. We are a group of like-minded people. When you hire these seasoned ladies who have passion for all that they’re doing, they focus exclusively on their tasks,” she said. “They have daily meetings to make sure they’re working toward the same goals. I love hiring people who are more skilled than me.”

The respect Wise has for her team shines through when she discusses the women who have been hired to continue the L*Space legacy. She treats them to surprises, which she loves, including catered lunches or freshly prepared salads with wholesome ingredients.

“As my company has grown, I’ve learned to take time for myself. I hired the right team, who understands the importance of getting the job done, and they work hard at it,” Wise said. “Connecting with these passionate, driven girls who connect with our brand, I become inspired by them.”

Forging strong relationships isn’t simply a focal point of Wise’s management style with employees, it’s also an approach that is promoted within L*Space’s relationships with its retailers.

L*Space organizes educational opportunities at retail-partner locations for sales associates to learn the details of the brand’s designs. These meetings also allow the brand to learn more about the needs of its retailers, participate in trunk shows and recognize the shared mission of selling quality products.

“We do a lot of product-knowledge seminars to train retail staff regarding how to sell the LSpace brand, on our various cuts and understanding the product. We get them excited to sell LSpace,” Wise said. “It’s more than a pitch. It’s passion.” 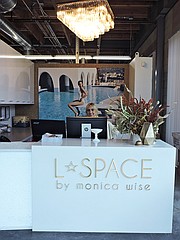 The expertise and enthusiasm found within the LSpace team is one of the strongest benefits of working with the brand, according to its retail partners. For Dayna Mance, owner of the 6-year-old Prism Boutique, with California locations in Long Beach and Costa Mesa in addition to an e-commerce site, the feeling of working with LSpace is one of genuine care for her business.

“The team is really awesome and stands behind the brand. Whoever is doing the hiring is really good. Their team is just high quality,” she said. “They were very supportive of me, my store and my business. They genuinely care and ask how they can support me. Not every company is like that.”

When the 2019 Coachella Valley Music and Arts Festival came to Indio, Calif., in April, Mance and L*Space partnered on an event held at a house near the festival grounds to create a Prism Boutique party. In addition to a pool, D.J. and other attractions, Mance partnered with brands to represent each piece of apparel that would make the perfect Coachella outfit.

After one year of working together and seeing how popular the brand is with her 25-to-35-year-old female clientele, who pay an average $150 retail for a single piece and $200 retail for a two-piece set, Mance chose L*Space as her swim partner.

“We curated a group of brands in shoes, swim, clothing and sunglasses to create the festival outfit. They trusted me to put on this three-day event in a beautiful house,” Mance said. “They took a risk, and they were amazing to work with. I’ve never worked with a team that was as on point.”

Diane’s Beachwear, the 60-year-old Torrance, Calif.–based retail chain with 13 stores primarily in California and Arizona, began working with L*Space from the manufacturer’s start 20 years ago. The retailer carries swimsuits that average $180 for a bikini or a one-piece and caters to women of different ages, explained founder Diane Biggs.

“[L*Space] is designed for that core beach girl. It fulfills a lot of markets. It has a wide range of attractions for us,” Biggs said. “They’ve elevated themselves. The design, the bodies and the colors—they add that extra touch. Monica puts that design style that pulls attention away from the other brands. It’s simply fabulous.”

At Diane’s Beachwear, L*Space remains one of the retailer’s top brands due to its style and quality, and Biggs feels that the support she receives from the company is extraordinary.

“What I really appreciate is the partnership and how supportive they have been for our company,” Biggs said. “It’s good to have the features and benefits that they can speak to the customers. It’s that extra value.”

Now a lifestyle swim-and-apparel brand, L*Space has offered loungewear for the last few seasons, also expanding into bags, sandals, hats and a potential leap into pajamas. As the brand continues to grow by adding new product lines, it might take a step back to celebrate its anniversary.

In addition to working with retail partners to host celebratory events, Wise mentioned that there might be a rerelease of some of the brand’s styles from the past. Perhaps the L*Space customer will have the opportunity to revisit old favorites or encounter them for the first time.

“The fringe trend put us on the map. Our customers were obsessed with it, and stores couldn’t get enough. We sold 90,000 units of one fringe top alone during a single season in 2009. It was called the Fringe Audrey Halter,” Wise said.

After the success of that style, Wise realized that her hard work had paid off when a retailer sent a note to the L*Space founder relaying her appreciation for the label’s success.

“That year, during Miami Swim Week, Ron and Pat from Atlanta Beach sent a card to me and it said, ‘Monica, you’re now officially an iconic brand,’” Wise recalled. “The fringe made us iconic in their eyes.”

For now, Wise continues to wake up at 4 a.m. each day to work out before joining meetings with members of different L*Space departments, such as social media and marketing, to discuss how best to connect with customers.

“My passion keeps me going,” Wise said. “I still love it now as much as I did on day one.”