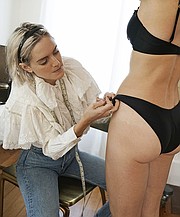 She honed her skills working at Los Angeles–based Apparel Ventures, a swimwear concern acquired nine years ago by Manhattan Beachwear in Cypress, Calif.

At Manhattan Beachwear, one of the largest swimwear makers in the United States, Godshaw designed swimwear collections for well-known labels including Nanette Lepore, Bikini Lab, Rampage and Puma.

In 2015, the swimwear designer left Manhattan Beachwear to work for Nasty Gal, where she was put in charge of launching the online company’s swimwear and intimates line. “After I had been at Nasty Gal for a while and working with other women who were starting their own side brands, I started to branch out,” said the graduate of Otis College of Art and Design. “I felt I wasn’t maxing myself out. I felt in my 20s it would be good to work my butt off.”

So, on a free-lance basis, she helped grow Show Me Your Mumu, a mumu maker expanding into other categories including swimwear, lingerie and activewear lines.

Meanwhile, with a small bank loan, she quietly started Sidway Swim with the angle that its silhouettes and style would be fashioned after the super-model styles of the 1990s—think Naomi Campbell, Linda Evangelista and Claudia Schiffer.

“I wanted to start a swimwear company that embraced the natural body type seen in models who were curvier and not so Photoshopped,” the designer said. “I wanted to produce these suits that were glamorous but not overdone.” 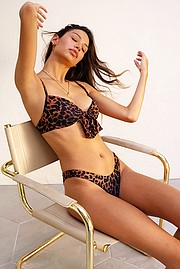 Her silhouettes are flattering and often cover more territory than the skimpy bikini, which can make women feel uncomfortable. “I don’t want to be glamorizing these unrealistic body types,” she explained.

In all her suits, she uses a luxe and lustrous jersey knit with a high spandex content that molds to the body and sculpts your shape. The hems are filled with a premium full-flex rubber that doesn’t sag over time. “It will hold you up without digging into your sides or create tension at the hem,” she said. “It is smooth on your body and still stays on.”

There are one-piece and two-piece suits that started out in solid colors, but last year Godshaw introduced a white-polka-dot-on-brown-background print that took off on In­stagram. “It put us on the map,” she recalled. “It was inspired by the dress Julia Roberts wore in the movie ‘Pretty Woman.’” 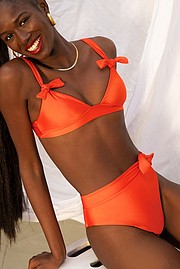 With that polka-dot venture, prints became more integral to the collection, with the latest offerings now featuring a subtle leopard/tortoiseshell print, a black-and-white dot print and a tropical print called the Islander.

One of the designer’s favorite silhouettes is a one-piece suit à la the popular TV series “Baywatch” that has adjustable sash ties at the shoulders and a high-rise leg. “I am petite but kind of busty. I wanted something I could feel sexy in but that adjusted to my body.”

Other silhouettes include high-rise bottoms and more-skimpy bottoms as well as bandeau and triangle tops.

Sidway Swim, whose retail prices range from $90 to $95 for separates and $145 for one-pieces, is sold at various swimwear stores across the country, including Coast by Coast at the Platform shopping center in Culver City, Calif., and Isalis in San Francisco. In Florida, it is sold at Sal Las in Coral Gables and Love Shack in Delray Beach. Online it can be found at bikini.com, shopbaiae.com as well as sidway.com. 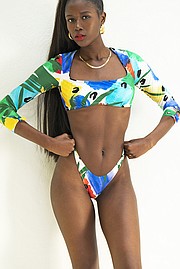