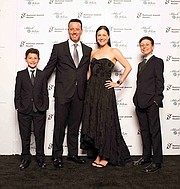 Honorees at the event were Sydnee Breuer, executive vice president at Rosenthal & Rosenthal, a finance company that works with the apparel industry, and Nicholas Rozansky, an attorney with Brutzkus Gubner Rozansky Seror Weber LLP.