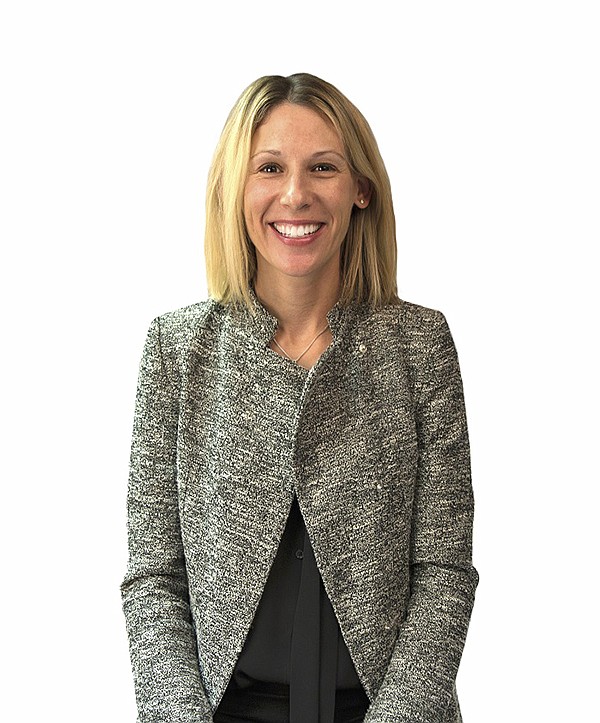 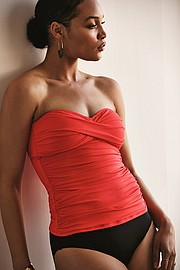 In the last few months, the executive suites of one of the largest swimwear manufacturers in the United States have been occupied by a phalanx of female managers and directors who are running the swimwear company after it was helmed for years by men.

In the top spot is Lindsay Shumlas, who became the company’s chief executive officer last September after holding the dual positions of chief financial officer and chief operating officer.

The company has more than a dozen labels, which include proprietary labels La Blanca, The Bikini Lab, Maxine of Hollywood and 24th & Ocean as well as licensed labels including Lauren Ralph Lauren, Nanette Lepore, BCBGMaxAzria and Trina Turk. It also manufactures private-label goods for several big-name retailers including Macy’s, Dillard’s and Kohl’s.

“In the first six months that I have been here, I have recruited an entirely new executive team,” said Shumlas, sitting inside her corner office, which is dotted with leafy green plants and flowers. Photos of her two children and husband sit behind her desk.

That new executive team was hired through recruiters so it is not necessarily intentional that all the top executives are women. “The candidates selected were the most qualified for the role and had passion for the work underway at Manhattan Beachwear,” Shumlas said in an email. 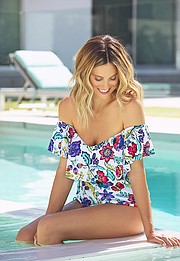 Now, just doors away, is Joy Banducci, who came on board nearly three months ago as the chief financial officer. Down the hall are Zina Robinson, vice president of human resources, and Carrie Helferich, director of brand marketing.

Also on the same floor is Nicole Haase, named chief merchandising officer nearly two months ago after working at ModCloth for more than five years. The vice president of product development is Masami Shigematsu.

The female revolution was launched last fall when Ohio-based Linsalata Capital Partners, which acquired 80 percent of Manhattan Beachwear in 2010 from founder Allen Colvin, decided to replace Kevin Mahoney, who had been the CEO since 2016.

Also gone is Howard Greller, a longtime swimwear executive who was vice president of design.

Shumlas was hired by Linsalata to move the company forward after Manhattan Beachwear had a difficult last year. “We had a challenging year meeting customers’ deliveries, with internal delays on product,” she said, noting she has been working on better communication between the design and sourcing teams. “Our focus has been to make sure we are on calendar and on time.”

Missteps at the swimwear company, which employs more than 200 people, were noticed by Marna Hann, the longtime co-owner of the Jerrie Shop, a swimwear store on Long Island, N.Y. As of two years ago, she carried about 90 percent of the labels made by Manhattan Beachwear. Now she has an order for La Blanca but nothing else.

“The one thing that is troublesome is fit, which is the key to the kingdom in swimwear,” Hann said. “Manhattan Beachwear owned the best fit in the industry. However, they are so busy marketing the product that they forgot to design it.”

Hann said she noticed this problem within the last year and has talked to Shumlas about it. Shumlas said the company makes it a priority to address fit and quality issues it hears about and would never value marketing over the product quality.

“I don’t know whose fault this is,” Hann noted, “but the bottom line is, stop worrying about marketing and get rid of the bad stuff you have and start focusing on making pretty swimwear again.”

Another longtime retailer that has stocked several Manhattan Beachwear labels for years is Sylvia’s Swimwear, which has two stores in the Seattle area.

Last year the company’s chief executive, Sylvia Bailey, did not carry the La Blanca line, which is a big seller, because she noticed that Amazon.com was carrying it for nearly half the price at which she was selling it. “It was purely because of the Amazon thing that I was not carrying it,” she said. “This year it is different. We are carrying La Blanca in the store.” She said Amazon is now carrying La Blanca at a price that matches her own.

Guaranteeing that retailers can get full price for their merchandise is one of the main goals for the new chief executive. Shumlas also wants to make sure each brand in the company’s stable of labels doesn’t overlap with the others. “In a house of brands like we have, we have to understand the DNA and demographic of the customers and be focused on each product line and what each product stands for,” she said. “Three of our lines, Lauren Ralph Lauren, Kenneth Cole and La Blanca can sit together, but there is a different reason for each of those brands.”

Along with distinct personalities to each brand, the company is embarking on a program to incorporate larger sizes into its merchandise. This is something that many swimwear companies have done as have retailers such as Torrid and Lane Bryant, which cater to plus-size women.

But Manhattan Beachwear hasn’t been as aggressive in adopting plus sizes, which is a fast-growing category because 68 percent of women in the United States now wear a size 14 or up. “Strategically, I set my vision for where we are going to empower all women in swimwear,” said Shumlas, who was the chief financial officer at the childrenswear company Matilda Jane in Fort Wayne, Ind., before working at Manhattan Beachwear.

So, for the 2020 swimwear collections, Manhattan Beachwear is hoping to develop larger silhouettes that go up to a size 24. But on the other side of the spectrum, Shumlas is thinking about bringing in smaller sizes, such as a 0 or a 2. “We are working through a full-fit assessment right now,” the CEO said.

International expansion is another goal for Shumlas. Currently, Manhattan Beachwear has one distributor in Europe, based in Germany. She would like to expand revenues, which the company does not disclose, by finding more distributors in areas such as Spain and Italy.

At the same time, she is examining new sourcing opportunities. Right now, about 70 percent of the company’s swimwear is made in China and another large share is done in Vietnam. About 10 percent is made in Mexico, where the company used to have two factories but now works with contractors. For fast-turn items in Mexico, Manhattan Beachwear uses Canadian fabric for duty-free entry into the U.S.

But Shumlas has a sourcing trip planned soon to visit China, Vietnam, South Korea and Indonesia, where Manhattan Beachwear used to do a good deal of its sourcing, to check out alternatives. “It’s important that we have multiple sourcing models—core, fast-turn and fashion—and that we link our sourcing strategies to the overall business strategies,” Shumlas said. “It’s important to make sure you know which factory is best for the brand and where the fabric is coming from.”