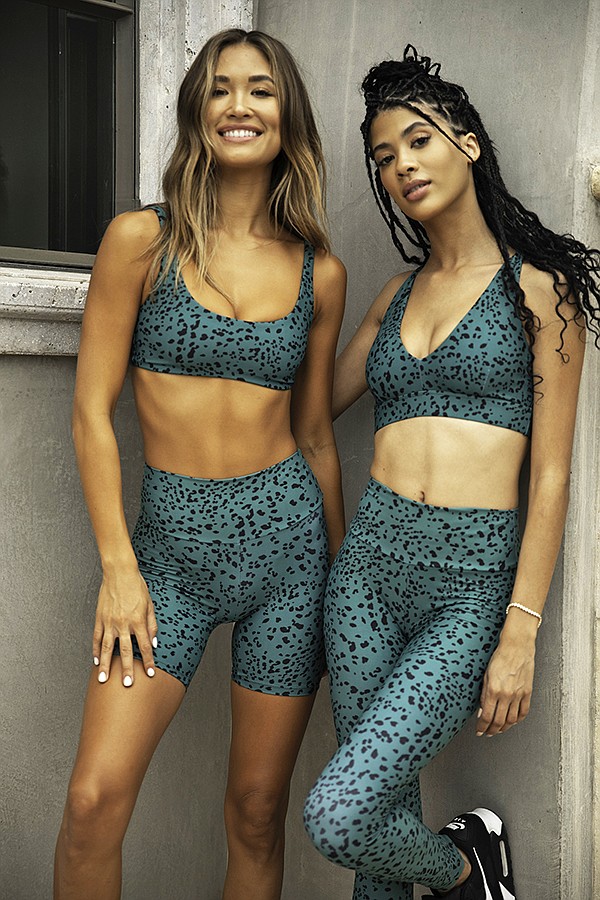 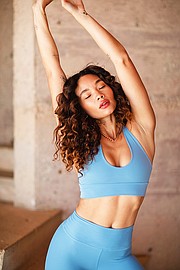 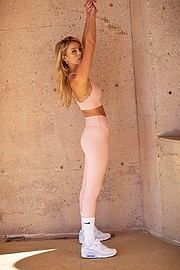 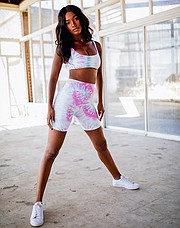 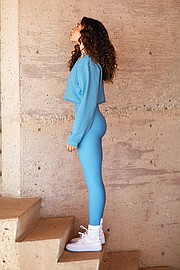 The deep Southern California roots of activewear from the Skatie brand have been growing for more than a decade. From classmates to co-founders of an active-clothing and swim line, Skatie Noyes Hutchinson and Mandi Glynn have been working together since 2009 when they were students at the Fashion Institute of Design & Merchandising, where the former studied fashion design and the latter pursued visual communications. After graduating from the school in 2011, each worked in the fashion industry and, in 2016, launched the Venice, Calif., Skatie brand of swimwear, with activewear following in 2018.

“We founded Skatie based off of wanting to be sustainable and use what was readily available in the market,” Noyes Hutchinson said. “We started out by buying dead-stock fabrics from other designers. I approached brands like Beach Riot, Mara Hoffman, Bettinis and other L.A.-based people who did production here and would buy what they had left over from old collections.”

While Skatie relies on a direct-to-consumer model of business at skatie.com with new limited-edition product released weekly from its activewear, swim or leisure lines, Noyes Hutchinson and Glynn’s brand quickly rose in popularity, forcing them to produce more product quickly. In addition to sourcing dead stock, they also use more-ecologically sound options from brands including Eclat, Kendor and Rex Fabrics, which offer options such as materials from recycled fibers.

“Working in the industry beforehand, we both saw firsthand the waste that is involved in the fashion industry,” Glynn said. “We wanted to make sure we avoided that with our brand.”

While responsibly sourced textiles are important, Noyes Hutchinson and Glynn learned a lot about the treatment of workers during their careers working at other brands prior to launching Skatie. This education led them to contribute to building a more-ethical industry. By building together, Noyes Hutchinson and Glynn have seen the production house grow as they emphasize their focus on making clothing that allows all employees to live fulfilled lives.

“Beyond [materials], it’s how is your team sustainable? How are you making the lives better of every single person that is affiliated with your brand? We really believe in highlighting and lifting up others with us,” Noyes Hutchinson explained. “The woman who started [our production] has been able to grow her business alongside us and in a really ethical, good way.”

Learning many lessons while working in the garment industry, Noyes Hutchinson and Glynn also learned that sticking with their vision is integral to their brand’s success. Years ago, prior to launching Skatie, when the duo would discuss their desire to bypass wholesale in favor of launching a direct-to-consumer brand without a retail presence, other professionals within the industry thought this decision was foolish. During the COVID-19 pandemic, this model has proven crucial to not only maintaining an apparel business but also cultivating Skatie’s growth.

“We really doubled down on that and it’s paid off,” Noyes Hutchinson said. “We were completely set up, and our business was able to thrive 100 percent during the pandemic when most retailers weren’t. We were able to grow our business in the last year because we were already set up for this kind of climate.”

For the Skatie customer, the brand mission of sustainable pieces is complemented by a focus on promoting a fun, responsible, active lifestyle. Using Skatie’s nickname, which is a blend of her formal name, Susan Katherine, branding for the company stems from the journey that led her to California from life growing up in the Midwest.

“She is a Midwest girl who moved to California so the name embraces the person that our brand is about—the California girl,” Glynn said. “When naming the brand, it was catchy and made sense.”

Available in P–L, the Skatie activewear collection is priced at $55–$80, with hoodies available for $105 and hoodie dresses sold at $130. Recently, Skatie expanded its swimwear—priced to $140—to XL, and activewear is expected to follow by March.

“The mission for our customers would be to have something that is comfortable for everyone,” Glynn said. “I have seen a great response from plus-size girls who are rocking our swim now.”