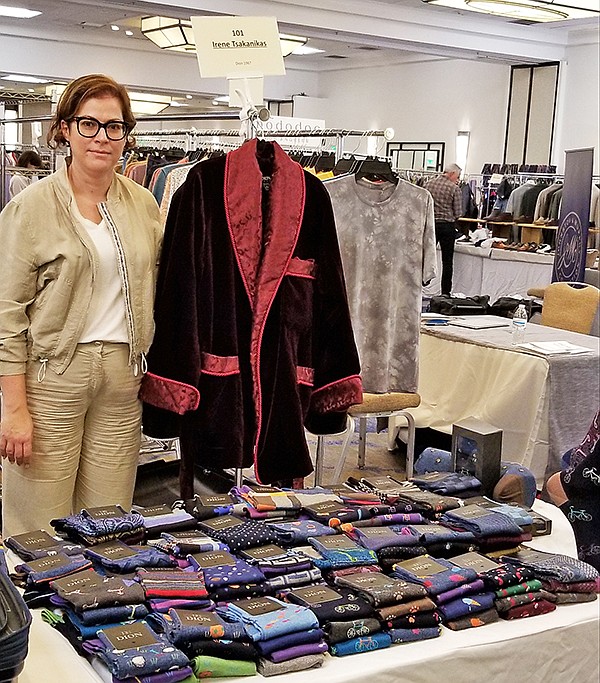 During the CALA Men’s Trend Show, Irene Tsakanikas stands beside show favorite Dion Neckwear Ltd.’s martini jacket, which is one of the Canadian manufacturer’s most-beloved pieces.

With its lineage stemming from the Ken Haruta West Coast Trend Show and Gerry Murtagh’s CALA brand, the CALA Men’s Trend Show made its debut Aug. 15–17 at the Marriott Hotel and Spa in Newport Beach, Calif. Though the show was still wrapping on Aug. 17, Haruta was already reveling in the success of this launch and looking toward the future.

Reporting the highest retailer attendance in his 14 years of producing his show, Haruta mentioned a 174 percent buyer increase.

The CALA Men’s Trend Show hosted an opening-night party with partners Haupt, Saxx and Marcoliani on Aug. 15 at Gary’s, a fine-goods men’s retailer located at Fashion Island in Newport Beach.

For John Braeger, president of Gary’s, partnering with Haruta and Murtagh to host a party was only one facet of his interest in the show. During the day, Braeger could be found on the show floor, searching for goods to incorporate in his store.

“We’re buying short-sleeved shirts, and the trend is on the knitted shirts—knitted sport shirts. We’re still selling soft coats and swackets—sweater jackets—so that has been really popular. Sneakers are still really strong,” Braeger said. “Denim also continues to be really strong, whether it’s denim or color, and five pockets.”

An enormous trend that was apparent during the show was soft, comfortable clothing that is stylish yet affords movement. At the Peerless Clothing International booth, West Coast Sales Representative Julie Dreyfus was pleased with the presence of better specialty stores and had been busy every day of the show fielding orders for her tailored clothing from TailoRED.

“They want suits and soft. We are trying to get people back into clothing again. It’s about soft construction and comfort. In every brand we need stretch,” said Dreyfus, who mentioned trends in blue and brown. “Four-way stretch gives comfort, and it’s wrinkle resistant. We’ve added some polys, viscose, elastane and spandex. It’s not about all-wool suits anymore, it’s about performance just like your exercise wear.”

Exhibiting at the Proper Fools booth, Managing Partner Tim Ellis was representing Flag & Anthem and Vustra. In town from Portland, Ore., Ellis reported that the Americana feel of Flag & Anthem coupled with its quality and value drew buyers to woven shirts that retail for $59.50 and jeans that retail for $69.50. Ellis also mentioned that comfort is king with jean products that are knit and include 27 percent stretch.

Visiting the show for The Patios at Valencia Town Center in Valencia, Calif., store manager and buyer Jeannie Slitzky was impressed with the event’s layout and reported that 95 percent of the 25 lines that she saw reported opening new accounts. Slitzky found the booth setting and open atmosphere more inviting and accommodating to her shopping style of visiting every business to find new and different pieces.

One of Slitzky’s preferred vendors at the show was the Toronto-based Dion Neckwear Ltd., where Vice President of Merchandising Irene Tsakanikas was selling the luxury brand’s made-in-Canada socks, ties, scarves, men’s accessories and formal pieces in addition to its extraordinary martini jacket—once favored by Playboy founder Hugh Hefner.

“We’re a family-owned and -operated company based out of Toronto. We’ve been manufacturing since 1967. Everything is handmade, hand finished, old artisan, bespoke-style manufacturing,” Tsakanikas said. “The smoking-martini jacket is one of our masterpieces. This is a beautiful cotton-velvet body with contrast silk lapel cuff top pocket, and we can put an interior pocket. It can be monogrammed as well.”

Steve Goodwin of Yakima, Wash., was impressed with the show’s lineup of exhibitors as he shopped for his better-men’s clothing store Steve Goodwin the Haberdasher. With 19 appointments over two days, Goodwin was searching for items in high color that would make his store pop as he noted the return of trends in neckties.

“There were a lot of old gold and chartreuse that were more fall colors, but they’re spring fabrication. There is a lot of orange,” Goodwin said. “There is no reason that local merchants shouldn’t support a show like this. It’s got the right connections and the right people.”