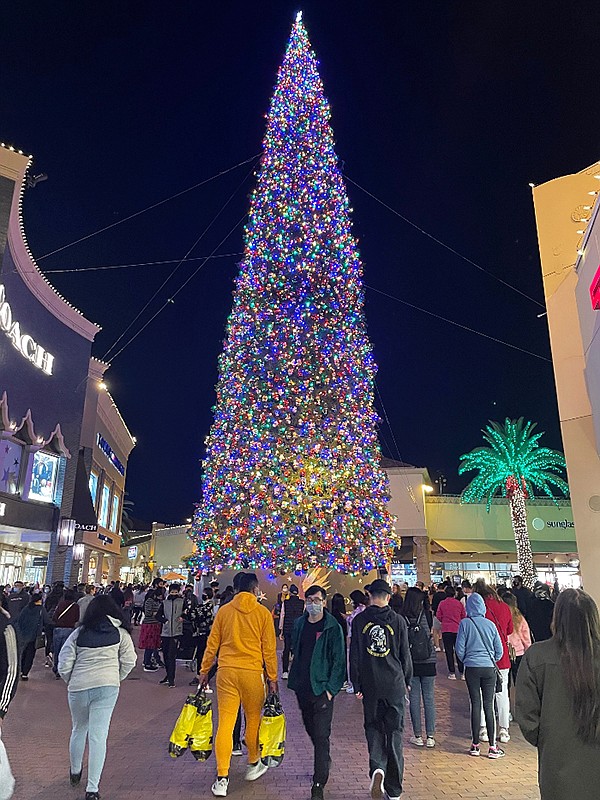 Shoppers took to The Citadel Outlets in Commerce, Calif., on Thanksgiving night to get an early start on their holiday shopping lists. Over half of the stores were open at 8 p.m. Thanksgiving night until 11 p.m. Friday night to provide a 27-hour experience for die-hard shoppers. Visitors were also able to admire California’s largest freshly cut Christmas tree, which stands at 115 feet tall.

The 2021 holiday shopping season was predicted to break all sorts of sales records, with both online and in-store sales expected to increase significantly. Although supply-chain issues have made it harder to find some of the hotter holiday items, many shoppers were out as early as Thanksgiving night with their families, extending their celebrations by going out to shop, something that wasn’t easily accessible last year. As the world slowly returns to pre-pandemic ways, Black Friday 2021 brought a new twist to the traditional holiday shopping of years past.

The Citadel Outlets in Commerce, Calif., drew a large crowd of people on Thanksgiving night as shoppers wanted to get a jumpstart on their holiday shopping lists. More than half of the stores in the outlet mall opened at 8 p.m. on Thanksgiving, while the rest welcomed shoppers at 6 a.m. on Black Friday. Starbucks had one of the longer lines of the night as shoppers tried to stay warm and awake for a long night of buying, with some stores that opened on Thanksgiving night remaining open until 11 p.m. Friday for a 27-hour shopping event. Shoppers were also able to take photos in front of California’s tallest freshly cut Christmas tree, which stands at 115 feet high. The Citadel also offered snow shows from 5 to 9 p.m. throughout the holiday weekend, allowing shoppers to really feel like the holidays were just beginning.

Although just over 50 percent of the stores were open, every store that was open for business had lines of people eager to get started on the sales. Some stores, such as Kate Spade, had lines so long they were forced to split into two separate sections, leaving a walkway for other shoppers. While stores had lines to control the traffic flow of shoppers entering and leaving, other stores had lines to limit the number of customers inside their shops at one time to comply with COVID-19 restrictions. 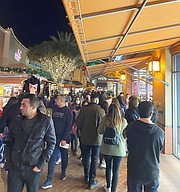 On Black Friday, the Los Cerritos Center in Cerritos, Calif., opened at 8 a.m., just a couple of hours earlier than normal hours of operation. The mall had previously opened as early as 5 p.m. on Thanksgiving but opened earlier on Black Friday morning as more retailers had opted to stay closed on the holiday to allow employees to spend time with their families.

The mall was busy in the morning as shoppers began their day early rather than staying out late at other shopping locations. Shoppers were happy for the semblance of normalcy as they set off to shop the deals. Sales at the mall ranged from 20 percent to 50 percent off select items to 20 percent to 50 percent off entire purchases. While the mall was busy, the majority of the shoppers were found crowding the department stores, Macy’s and Nordstrom, where they were able to knock out multiple items on their lists in a single location.

A string of smash-and-grab robberies in California and other cities across the country became a concern over the long weekend. Groups of robbers targeted a Nordstrom in Los Angeles and stole thousands of dollars worth of merchandise. The L.A. thefts followed similar incidents in the San Francisco Bay Area, where a group entered the Southland Mall in Hayward, Calif., and smashed cases at a jewelry store, making off with the items items displayed inside. In addition to the incidents in California, a group of robbers stole more than $100,000 worth of merchandise from a Louis Vuitton store in Chicago. These recent crime sprees resulted in greater security at retailers as local police departments made their presence known by stationing vehicles in areas visible within shopping-center parking lots.

One of the most recent additions to the Thanksgiving holiday weekend has been Small Business Saturday, created by American Express andfirst observed in 2010. The day serves as a counterpart to Black Friday and Cyber Monday and encourages customers to support local businesses.

As more people turned to creating their own small businesses due to various effects of the pandemic, this year’s Small Business Saturday felt more important than ever. In Long Beach, Calif., the Belmont Shore Business Association organized a scavenger hunt for shoppers. The first 25 participants to finish the hunt were awarded a gift card for a local business. The Downtown Long Beach Business Alliance also hosted an event where two shoppers each won a $500 gift card from a business of their choice by making purchases and collecting stamps at eight different local businesses. 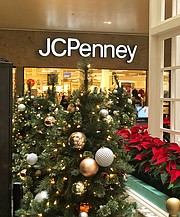 The pandemic affected holiday shopping last year by encouraging more people to shop online. This year, retailers adjusted to match shopping trends and expanded their online shopping deals through Cyber Monday. As more consumers turn to online shopping, Cyber Monday deals have expanded to cover more than just the Monday after Thanksgiving, with retailers including Best Buy, Target, Walmart and Amazon continuing some of their deals.

In a recap of the post-Thanksgiving shopping scene, the National Retail Federation reported that nearly 180 million Americans shopped during the five-day period from Thanksgiving Day through Cyber Monday, according to a survey released in partnership with Proper Insights & Analytics.

The survey data showed the number of people who shopped in stores increased this year, with almost 105 million people visiting stores, up from the 92.3 million in 2020. The increase in foot traffic resulted in a lower number of online shoppers, with the number falling from 145.4 million last year to 127.8 million this year. Black Friday remained the most popular day for shopping followed by Small Business Saturday. Supporting local businesses was an important issue for consumers this year as 71 percent of those surveyed said they went out shopping on Saturday specifically to help their communities.

“While Thanksgiving weekend and Black Friday were once upon a time the kickoff to the holiday season, because of the pandemic a year ago and changes in consumer behavior this year due to things happening across the supply chain and shoppers starting earlier, Thanksgiving and Black Friday are closer to halftime now than the kickoff,” said NRF President and Chief Executive Officer Matthew Shay.