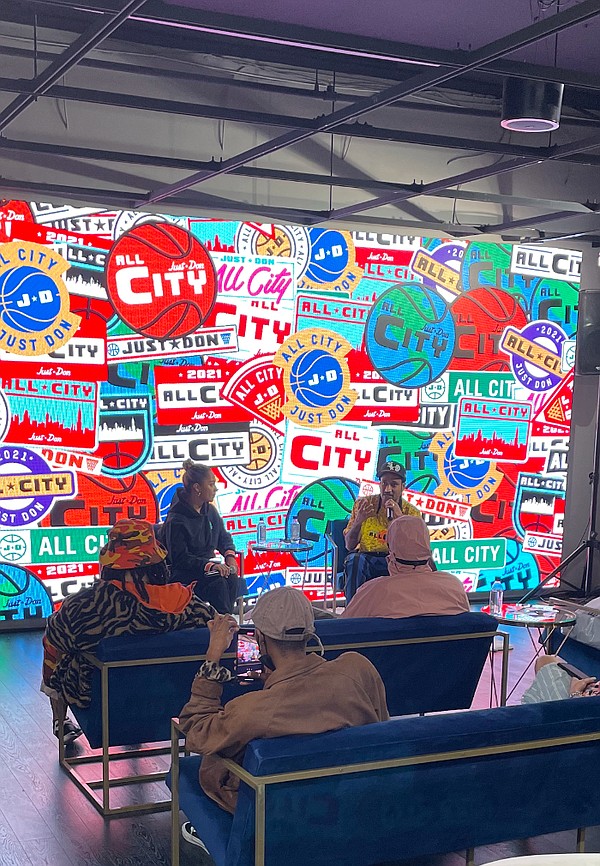 Event host Denise Jones spoke with streetwear designer Don C about his new All City by Don C collection with Foot Locker, what inspired the collection and what the future of the collection holds. Don C also offered advice and tips for all of the designers and brands in attendance.

Foot Locker Workshop Calls on Creative to Build Community Together

In celebration of the new All City by Just Don collection, created in partnership by Foot Locker and streetwear designer Don C, the athletic retailer held several workshops for creatives and designers to come together and build a community of people who want to help each other succeed.

The event was held at Foot Locker in downtown Los Angeles. Attendees were greeted with a live DJ and were able to grab a drink or some food before the event got started. Select guests were given gift bags filled with various pieces from the All City collection, and pieces from the collection were also available for purchase. Foot Locker also set up custom embroidery stations so anyone that received the All City merchandise was able to make it unique and their own.

At the start of the event, Don C and event host Denise Jones discussed a variety of topics, including the All City collection, where the inspirations for the collection came from, and what the future of the collection holds. Don C spoke on how important it is to be authentic to yourself when creating, which the embroidery stations exemplified.

The event finished with a give-and-take networking activity, where someone would offer their services, such as photography, design, styling or marketing, and then ask the crowd for help with something they needed in return. The final activity further cemented how powerful a community working together can be as everyone was happy to connect with one another to further each other’s creative visions.