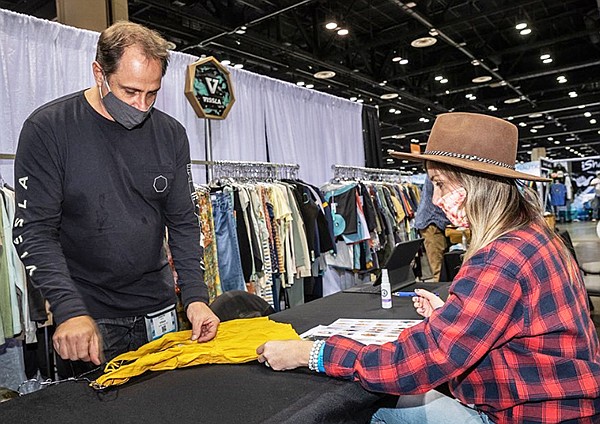 At the Vissla booth, strong categories included boardshorts, sofa-surfer walks, tees and long-sleeve wovens in addition to wet suits due to the rise in popularity of surfing, a naturally socially distanced sport.

Returning to its home at the Orange County Convention Center in Orlando, Fla., Surf Expo, the major trade show for the water-sports and beach-lifestyle categories, was held Jan. 6–8. While the Emerald Expositions–owned Surf Expo relied on its digital edition Sept. 16–18, Surf Expo Connect, many in the industry felt it was time to return to the trade-show floor.

Owner of the Palm Produce Resortwear shops, Stephen Licata, was happy to be at the show after relying on virtual resources to conduct meetings and see lines. With five doors spread throughout exclusive neighborhoods in New York’s Sag Harbor and Southampton areas and South Florida’s Coconut Grove, Key Biscayne, and Pinecrest neighborhoods, Licata was shopping to replenish his inventory with resortwear.

“We need to return and start to return to some sort of normal operations for everybody. The show was great. It was great to get back,” Licata said. “It was important to get up there and get some newness in the stores.”

Representing the Vissla brand, Vice President of Sales Richard Sanders echoed Licata’s sentiments. Back on the show floor, Sanders mentioned that the return to an on-site trade show was important to lay the groundwork to rebuild the event space and move forward for a stronger future.

“Surf Expo has always been a great show for us, so we wanted to support the show. The show was important for the fact they needed to start somewhere, and I feel they did a good job of executing it,” Sanders said. “I believe they learned from this show and can build on this for September.”

Shopping the floor, Licata was able to find resortwear that was versatile. The Palm Produce customer is a shopper who is not terribly concerned with price point, affording a bit of freedom to Licata as he walked the floor hoping to find fresh styles for his shops to satisfy his clientele, who search for chic styles created with quality construction in alluring fabrics.

“What I did see was that the lines were trying to do things that people could wear both at home and out,” Licata said. “I saw more-casual things that translate for home use as well as going out. As far as colors, there is really no direction. It’s still pastels, and it will remain that for this period. I didn’t see a color direction that was something new.”

At the Vissla booth, Sanders saw interest from the surf-culture side as the sport continues to rise in popularity as an activity that can be performed solo or within a socially distanced group. Buyers were interested in seeing wet suits in addition to pieces that were useful for pre- and post-surf time.

“We have a few brands, and it was slightly different for each brand. Strong categories on the Vissla side were boardshorts, sofa-surfer walks, tees and long-sleeve wovens. We also did well with our collaborations with Town & Country and Da Fin. The hottest category was wet suits,” Sanders said. “On the Amuse Society and Sisstr side, the strongest categories were sweaters, fleece, loungewear and dresses.”

Perhaps most important was that while on the show floor both Licata and Sanders felt safe.

“I felt comfortable,” Licata said. “I took precautions, and they had precautions in place. Some of the booths, after we left, they would disinfect. That was something that I thought was great.”

Said Sanders, “Expo did their homework and had necessary protocols in place. They spaced the show well and had temperature checks and sanitizing stations everywhere, so I felt secure.”

Following this first on-site show since the COVID-19 pandemic spread, Surf Expo announced future event dates into 2022. The next on-site Surf Expo event is on the calendar for Sept. 9–11, 2021, with the next show scheduled for Jan. 5–7, 2022.