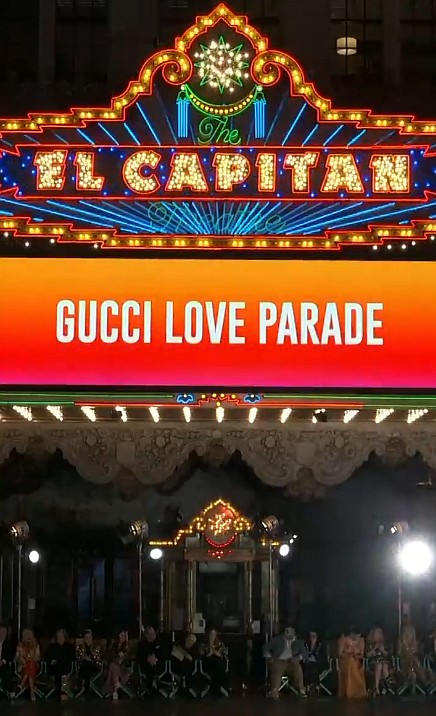 Producing a fashion event named for the Love Parade collection, Gucci Creative Director Alessandro Michele took over a portion of Hollywood Boulevard, allowing models to begin strutting the catwalk exiting Grauman's Chinese Theatre and heading down the Walk of Fame, which served as the runway. Photo: Gucci 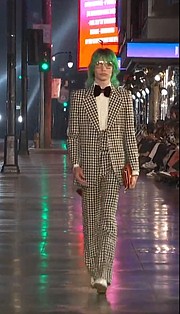 Transforming a portion of Hollywood Boulevard into a runway, Gucci Creative Director Alessandro Michele debuted Love Parade, a collection that spoke to the glamour of the Los Angeles neighborhood and its western region, while blending the style house's Italian fashion sensibilities. The event took place on Nov. 2, serving as an opportunity for the designer to retrace personal connections to Hollywood's glamorous culture.

"Mum worked in the film industry as an assistant in a production company. I remember all the stories she told me, and the details and the sparkles, about that dream factory," read the designer's Love Parade notes. "There was the alabaster paleness of Marilyn Monroe and her diaphanous voice. There were the black satin gloves of Rita Hayworth and Veronica Lake's velvet hair, as well as the bewitching allure of Rock Hudson and Kim Novak's dizzying transformative power. Everything felt like a fairy tale."

According to The Hollywood Reporter, Gucci will provide $1 million in grants to local organizations, thereby adding a philanthropic component to the Love Parade.

Among the models walking the runway were celebrities and artists including Jodie Turner-Smith, St. Vincent, Macaulay Culkin and Jared Leto, a personal friend of Michele's. Celebrities such as Billie Eilish, Lizzo, Serena Williams, Dwyane Wade, Zaya Wade, and Gabrielle Union-Wade took in the show from Gucci-branded director's chairs that lined the Walk of Fame.

"This boulevard of stars lends perfect support to my uncurbed love for the classical world. Hollywood is, after all, a Greek temple populated by pagan divinities," said Michele's notes. "Here actors and actresses are acknowledged as heroes of the myth: hybrid creatures with the power to hold divine transcendence and mortal existence at the same time, both the imaginary and the real."