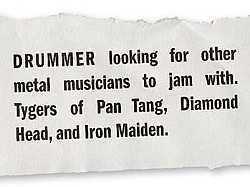 As Labor Day approached, workwear brand Carhartt and iconic metal band Metallica planned to collaborate to attract a new generation to enter the skilled-trade labor force. Inspired by a Los Angeles newspaper classified ad placed by the band’s Lars Ulrich in 1981 as he searched for musicians to form a group that would eventually become Metallica, Carhartt has committed to support the rockers’ All Within My Hands Foundation. Named for one of Metallica’s songs, the All Within My Hands Foundation fortifies communities by supporting workforce education, combating hunger and providing local services.

“To build the workforce of the future, we need to connect more people to the training and education that helps fill essential jobs,” said Janet Ries, vice president of marketing at Carhartt. “With our partnership, we’re sending the message that whether you’re in high school looking for a first step, or out of work looking for a new start: come join the skilled trades. What better time to recruit job seekers into these exciting, high-demand opportunities than on Labor Day?”

The initiative includes a want ad created in a similar manner as Ulrich’s original that appeared in the classifieds section of the newspaper, yet also drawing inspiration from the World War II-era “We Want You” advertisements.

Over Labor Day, Carhartt has committed to donating all proceeds from online sales made through Carhartt.com on Sept. 6, to All Within My Hands’ Metallica Scholars. The Metallica Scholars component of the All Within My Hands Foundation serves as a support system to community colleges by improving career and technical-education programs. Metallica’s commitment to supporting skilled trades stems from the band’s appreciation for the laborers who design, construct and execute their shows.

“Carhartt and All Within My Hands are bound by our shared passion for supporting workforce education,” said Dr. Edward Frank, executive director at All Within My Hands Foundation. “As two organizations dedicated to providing opportunity, we hope to expand the Metallica Scholars program to include even more schools this year, and to get even more students trained for a career in the skilled trades.”