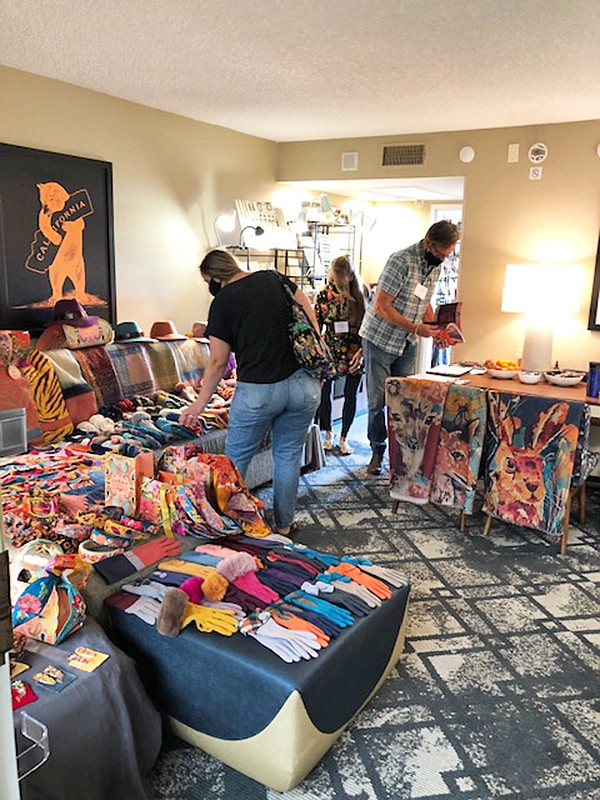 During its last edition, Fashion Market Northern California welcomed buyers who were ready to invest in placing orders, as they sought to refresh their stock and look ahead to upcoming seasons. | Photo courtesy of FMNC

Buyers and Exhibitors Converge at FMNC for Immediates, Spring Styles

During its most-recent edition, Fashion Market Northern California hosted its trade event at the Embassy Suites South San Francisco as buyers who value local shows met with exhibitors who were ready to take orders on Immediates and Spring. According to FMNC Executive Director Mary Taft, the show is continuing to grow with 25 to 30 new stores in attendance during each edition.

“It was a really good show. We had 82 exhibitors,” Taft said. “We didn’t have any smoke from the fires, but we had people come from those areas. We’ve been hovering around the 200-store mark.”

Taft also noted that buyers were visiting FMNC to do serious business as they move into the final months of 2021 and into 2022. This edition, which was held Aug. 22–24, was hosted in a suite-style atmosphere that allowed buyers to easily peer into each exhibitor space as they shopped.

“They are not coming to look around, they are coming to buy product,” Taft said. “And they do. People are buying product each time because they are buying close.”

Within the TASC Performance suite, West Coast sales representative Cameron Todd was welcoming buyers from Northern California who were interested in the Louisiana brand’s bamboo-viscose and organic-cotton essentials. Todd said that the store representatives who stopped by were prepared to buy.

“Most of the people I deal with, whether it’s resort properties or spas, wineries or men’s and women’s retail or specialized retail were in the mood to buy,” Todd said.

Buyers were also seeking color as they sought goods to replenish and refresh their stock. Todd was happy with the show and felt that being present at FMNC was important.

Buyer Kelli Frye enjoyed the inviting environment of FMNC while shopping for Coming Attractions, a Sutter Creek, Calif., boutique that specializes in misses clothing manufactured using natural fibers including cotton, silk, linen and a touch of rayon in addition to a bit of hemp. Frye said that her customers are responding with high interest to rich colors.

“The colors that stood out to me are just those beautiful jewel-tone fall colors that were really apparent and the classics of black and white with a splash of red,” said Frye, who was shopping for wholesale price points below $100. “That mustard color will not go away. It’s not a bad thing. We’ve had that year-round every season for three years.”