Catherine Gee’s latest collection has been successful with buyers at her Santa Barbara, Calif., shop and online, with many falling in love with the colors and the prints, which resonate with shoppers and create a personal connection. 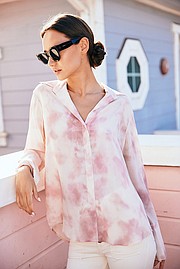 Taking inspiration from her travels, her surroundings, and islands in Europe and the Mediterranean, Catherine Gee’s Spring/Summer ’22 collection’s vibrant colors and prints bring to mind a vacation to Greece.

It features two colors as anchor points for the solids, a Mykonos royal blue and a bodacious tulip that she describes as in between a pink and a purple. The collection also features a variety of vibrant colors and prints that feature swirls and what she calls the Santorini print, further showing the influence of the Mediterranean on the collection. Gee said she also takes inspiration from how women dress in all the different places she has visited when designing a garment or creating a new silhouette. Her aim is to be inclusive and help women feel comfortable yet fully covered, elegant and confident.

“The collection has a very European feel to it and we shot the look-book campaign on Catalina Island, and I thought how fitting because the collection is deeply inspired by Mykonos and Santorini islands, the inspiration of the light in Southern California. So it was kind of a cool circular theme.”

Gee’s father was a career artist, and he instilled in her from a young age basic principles such as how to draft. Prior to starting her brand, Gee was the executive director of an art gallery but had always held on to the idea of starting her own silk line based on the silk kimonos she would find in her grandmother’s house.

After launching with product for the first time in 2016, Gee found success almost instantly, winning the Emerging Designers Showcase at the sprawling MAGIC trade show complete with a trip to Paris Fashion Week that same year.

Heavily inspired by the Santa Barbara, Calif., climate, Gee began the first collection of her eponymous brand with a line of travel-friendly pieces including linens, separates, matching sets, slipdresses and other core pieces that are still a big part of the brand to this day.

The latest collection has been successful for Gee with many falling in love with the colors and the prints. She said the response has been extremely positive from both buyers and consumers and that there is usually a personal connection involved with prints so it’s nice to see customers come in and really have one or two of the prints resonate with them.

Gee said that while developing the collection it was hard to get an initial idea of what would sell or be popular so it helped to get opinions from buyers as well as customers.

“We’re getting tons of reorders, we’re selling through and selling out, which is ideal. So the demand has been excellent,” Gee said. “For D2C, we have an e-commerce site and we have a store in Santa Barbara, and it’s been incredible because I work in my store so I’m able to interact with the women in the shop. It’s also fun because I go to shows and I meet and talk with buyers, but it’s fun for me to see real women come in the store and transform because of the colors and prints. And they love how everyday it is.”

Although Gee believes that she and her brand have found their niche in the market, she said that she still sometimes gets the urge to create something completely different and try something new. Her most recent experiment with jacquard jackets initially scratched the itch but now has her wanting to try something else new. For the more popular slipdresses and silk dresses, she likes to get a little more daring and has fun creating two to three new silhouettes each season.

“For a few years I thought I would really love a cool jacket. So I started thinking of different materials and something completely different for me was jacquard, whether it’s a silk blend or polyester. So I started sampling, and now we have this really awesome category of jacquard jackets,” Gee said. “That was one of the first times I thought to dive in and really try something different and I want to try again, and without revealing too much I think it will still be in the category of jackets and coats.”