SAN MATEO, Calif.—The weather outside was Northern California cool and gray, but the mood—and the merchandise—inside the San Mateo Event Center was sunny as retailers from across the Western U.S. turned out for Fashion Market Northern California to place orders for Spring goods.

The Oct. 23–25 show featured a mix of vendors showing women’s apparel and accessories for a range of categories, including updated sportswear and dresses, young contemporary, activewear, and footwear.

This season, the show opened on Oct. 23 with a presentation by Paul Erickson, a retail consultant and senior vice president of RMSA, retail management solutions software, discussing inventory control and productivity.

Show organizers were pleased with the response to the seminar and plan to expand the educational component in the future, said Ute Wegmann, owner of the Ute Wegmann Showroom in Los Angeles and FMNC president.

“It was our very first informational seminar,” Wegmann said. “The feedback was amazing. The whole idea is to empower our reps and our retailers.”

FMNC traditionally draws Northern California boutique retailers, but in recent years the show has been attracting exhibitors and attendees from farther afield.

“Our borders are disappearing,” Wegmann said. “We have vendors coming from the East Coast, from Oregon and Washington. We have retailers coming from farther away looking for an easy way to do business in a location where they can easily see product in an open-booth format.”

The show drew a steady flow of retailer traffic for the first two days, said Suzanne DeGroot, FMNC executive director, who said the April and October shows tend to be the largest of the five annual FMNC markets.

San Francisco sales representative Nancy Provda was managing a full schedule of appointments as well as drop-in traffic at her booth, where she was showing the latest collections by Fridaze, Rising Phoenix, Toofan, Yasuko and Ivy Reed.

“Both days were very busy,” Provda said on the second day of the show.

Provda said she was getting positive feedback from her accounts, who placed a few orders for Immediate delivery but were primarily buying Spring.

“Up here business is good,” she said. “I travel around the Northwest, and I’m hearing good things.”

Consolidated Shoe Co.’s Naked Feet collection is targeted to boutique retailers. The line is not sold online or to department stores.

It was back-to-back appointments at the Nancy Prickitt Accessories booth, according to sales rep Jessica Fernandez.

“This is our busiest show of the year,” she said. “We debuted Spring, but we also do a lot of Immediates for holiday.”

“The Bay Area is not slowing,” Fernandez said. “We’ve had great sell-through on Fall. People are excited to order for Spring.”

While most of the traffic was from pre-booked appointments, Fernandez said she and Prickett also met with potential new customers as well.

“We always get a few inquiries every show,” she said. For Hobo, a lot of our territory is covered. But last show I opened three or four new accounts.”

“It was a well-attended show,” she said. “Given that it’s an election year, it’s nice to see traffic growing. People are optimistic. I think holiday will be good.”

Brooke Papp, sales representative for Los Angeles–based young contemporary brand Miss Me, has been showing at FMNC for two years. The company, which typically has a large, enclosed booth at WWDMAGIC in Las Vegas, sets up a modest booth at FMNC.

“It’s a great show,” Papp said. “When I took over the territory, I tried it out and I had so many new accounts. Maybe they wouldn’t have looked at us at MAGIC, but here they can see the line is wearable for all sorts of bodies.” 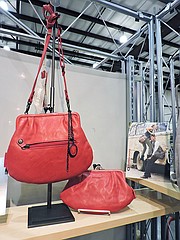 Papp said opening day of the show was “awesome.”

“It’s hard for them to get out of their stores, but people make a solid effort to see me here,” she said.

“We’re in the Smithsonian gift shop with our presidential socks,” Aaron said.

At FMNC, Aaron sees regional retailers from California and other Western states.

The company carries cotton and bamboo socks for men and women, with plans to launch a kids’ line next year. The company produces its socks overseas but stocks inventory domestically in a 20,000-square-foot warehouse in Santa Cruz for quick-turn deliveries.

“We don’t sell department stores; we don’t sell online,” he said. “We want to build the independent business.”

On the second day of the show, retailer Carol Munson, owner of 5th Street Clothing in Chico, Calif., had finished an appointment at Eileen Fisher and was looking through the Spring collection for Staples.

“When I buy a company I buy it all,” she said. “I have an entire section of Karen Kane.”

Munson and her daughter Jennie Elliot planned to spend two days at the show.

“I get it all done here,” she said. “They get together everybody under one roof.”

“People are staying more than one day here,” she said. “The quality of exhibitors draws a lot of buyers, and they stay and they buy.”

Stone said buyers are placing Spring orders for apparel. Typically, retailers wait until January to place Spring accessories orders, but, she added, “My hats are doing fabulous for Spring.”

“They are looking ahead,” Stone said. “That’s encouraging and that’s why I feel cautiously optimistic.”