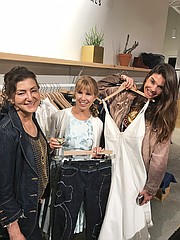 After spending time designing handbags and women’s ready-to-wear, Sophia Tezel-Tzelepis last year decided to branch out to denim with a label called Sophia.

On May 10, she brought her newest collection, dubbed “Rock Girls,” to a pop-up store at Fred Segal in West Hollywood, Cal­if. The pop-up runs through May 25.

“I’m looking at it as denim with a twist,” said the New York–based designer, who has worked at Rebecca Minkoff and Juicy Couture. Her inspiration for the 20-piece collection came from late-1960s models including Jane Birken, Jean Shrimpton and Veruschka. “It was a very powerful period, especially for women,” she said.

Looks include a denim pant called the “Snapped,” which features a flare around the ankles and rows of buttons below the knees.

Another pant is called the “SuperFly.” It’s a hip-hugging jean with extra details. If you undo the zippers around the hips, you can pull up the material to create skin-baring panels above the hips.

Other looks include bottoms with denim appliqués made in the shape of flowers and denim jeans with zippered pockets. The collection also includes denim halter tops, shorts and denim jackets. “Denim is a lifestyle,” she said. “It’s so comfortable and easy. It’s feminine and strong.”

The line retails for $275 to $675. The looks come in white, indigo and black. The collection also offers some T-shirts that feature an image of Mati, the Greek folk symbol that wards off evil, Tezel-Tzelepis said. Retail price points for the T-shirts start at $75.

The designer has started to plan the next season of her denim line with more color using natural dyes. 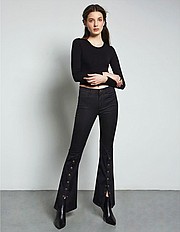 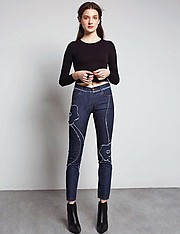 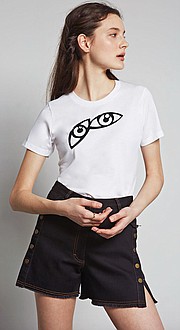