In addition to CFA President Ilse Metchek, speakers at the May 2 event included Nick Verreos, co-chair of fashion design at the Fashion Institute of Design & Merchandising, who advised students regarding “The Road Ahead.” Offering wisdom acquired during his nearly 30-year career in the Southern California fashion industry, Verreos revealed his “10 threads of advice” to work toward success in the apparel business, which included seizing opportunities and overcoming fear of the unknown to gladly accept every task and assignment. 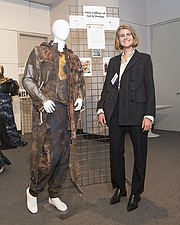 Melissa Marsella of Otis College of Art and Design 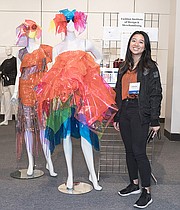 Valarie Chiu of the Fashion Institute of Design 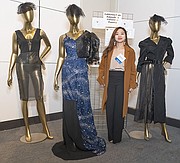 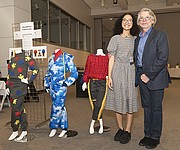 Speaking from her own experiences navigating the fashion industry, Marta Miller, owner of Lefty Production Co., discussed “Opportunity for Design Entrepreneurs.” With the ease of creating a direct-to-consumer business, she noted that the current climate in fashion is excellent for up-and-coming designers.

After lunch, which was provided by Brian Weitman of STC-QST Textiles and New Moon restaurant, CFF announced the recipients of its Fashion Star Awards in five categories: design, brand development, outstanding presentation, technology and environmental awareness.

Recipients of the Design Awards included:

Brand Development Awards were bestowed on:

For their work that garnered Outstanding Presentation accolades, Masumi-Stephens was recognized by the California Apparel News, Robles received an award from the California Market Center, and Chiuwas honored by the Cooper Design Space.

Student designers recognized with Environmental Awareness awards were Moratto, who received an award from the Rags For Riches Foundation, and Marsella, whose award was given by the Ben & Joyce Eisenberg Foundation.

With greater advancements regarding how the fashion industry implements automation and digitization tools, the Technology Awards were given to Zhichao Huang by Tuka­tech, and Staphany Robles and Tzu-Ting Huang, who were recognized by AIMS 360.