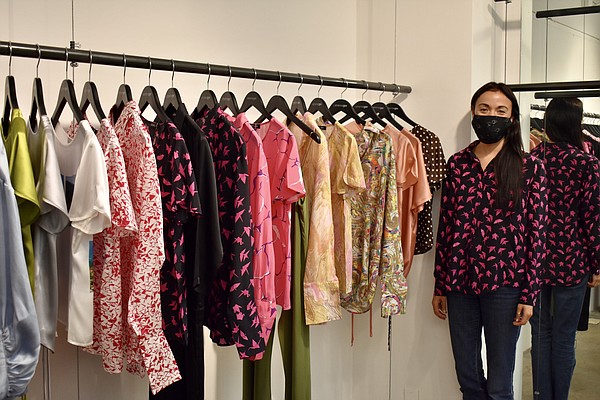 Catherine Gee stands beside her Spring 2021 collection during L.A. Market at the Cooper Design Space. | Photo courtesy of Catherine Gee

Candance Simmons of All That & More Boutique works in her shop while also attending L.A. Market through the CMC’s virtual CMC UPLOADED event.

Lenchner said that traffic was good during the show. “This market was better than the last,” she said.

She and her daughter Shannon Kane, who serves as a partner in the showroom, said that stores were being cautious about Immediates and Fall orders. But the retailers were making Spring orders. “I’m seeing a lot more confidence,” Kane said. “They’re also investing more in Spring. People are feeling safer. They’re also trying to float their businesses.”

Julie Jennerjahn, owner of the Steppin’ Out boutique in Taos, N.M., shopped The New Mart for trends including hoodies and leisure clothing with matching tops and bottoms.

New experiences at the CMC

Through its CMC Uploaded virtual feature, the CMC hosted buyers such as Candance Simmons, owner of the All That & More Boutique in Culver City, Calif., who has never missed a market during her 10 years in business.

“You have to be able to pivot in your mindset and business, and I’ve always been impressed with how the CMC can help you pivot,” Simmons, who shopped Fern Liberson & Co. and Sandra Loulakis, said. “I did everything virtually. It was amazing.”

Onsite at the CMC, Mark Tunnell of Tunnell Fashions Inc. reported a good market with buyers traveling in from New York and Pennsylvania to place orders in his showroom. He reported interest in anything tie-dye, bike shorts, lounge pieces, pleated and tennis skirts, and cargo pants.

“Right now, I am having a lot of good sales at market,” Tunnell explained. “Everyone is putting one foot in front of the other and continuing to stock their stores with more merchandise. I just took a bunch of 1/30 deliveries, which is really positive for me.”

At the Cooper, Catherine Gee showcased her Spring 2021 collection, which drew in buyers with its luxurious pieces in bright colors, including her popular silk shirting. Gee welcomed buyers from Alabama, Colorado and Texas.

“A lot of them flew in, did business and flew out. The buyers who are here know that life has to go on and we have to conduct commerce,” Gee said “They aren’t being conservative but being very specific with their buys.”

One of Gee’s clients, Michelle DeHaven of Boulder, Colo.’s Haven, flew into Los Angeles for the day. Placing orders mostly for Spring, DeHaven added a small Holiday capsule, noting that it was important to properly serve her clientele, who expect extraordinary quality.

“It felt very safe—please come back out. I want everybody to feel comfortable,” DeHaven said. “I never felt like people were not taking it seriously.”

Another issue for the market is that many retailers are seeing lines a bit late. “The timing of things is a little askew,” Marcher said. “But people were definitely happy. They’re buying.” The Marchers estimated that they conducted 25 meetings during the show.

Wholesale buying is rebounding from earlier this year, said Suzie Hart, co-owner of the Niche Showroom, which was representing Lysse, Billy T and Brave & True in the Lady Liberty Building.

“It was surprisingly busy. It was more of a market than we had all year,” Hart said. But retailers’ orders had not fully rallied. “They are buying vignettes. They are not buying in depth,” Hart said.

A new showroom opened at Lady Liberty during the October market. The cooperative showroom Globe Showroom/Omarche and Édité opened a permanent space, said Bruno Peutat of the Globe. Peutat feared that his clients might have a tough time finding a new address. “But it wasn’t bad at all,” he said. The Globe represented lines such as Let Me Be, Psophia Spain and Suncoo Paris.