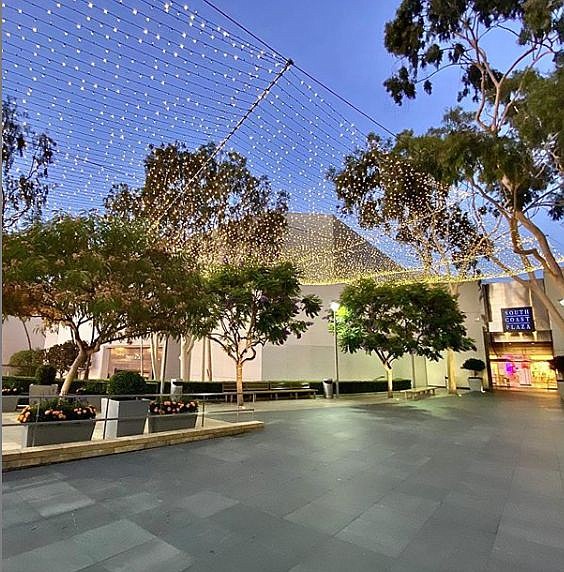 “The past months have been a test of resilience, flexibility and creativity for us as we’ve looked for solutions to support our boutiques and restaurants and continue to connect with customers,” she said.

After mostly being dark, the shops resumed business from 11 a.m. to 7 p.m. daily.

These stores include boutiques for top fashion houses such as Prada, Salvatore Ferragamo and Dior, as well as multi-brand designer emporium The Webster. Other apparel stores that are open for business include specialty retailers such as The Gap, Free People, Guess and the activewear shop Lululemon Athletica.

In addition to existing shops, the retail center was ready to welcome a new tenant during the reopening. A new location from Danish fashion brand Ganni is scheduled to open at South Coast Plaza on Sept. 8.

It’s the latest turn in a story where the mall has had to open and close. South Coast Plaza closed the week of March 16 after Newsom ordered nonessential businesses closed to stop the spread of COVID-19. On June 11, it reopened for a few weeks. When COVID-19 cases started spiking across the state, the governor gave an order July 13 for indoor malls to close. South Coast Plaza’s department-store anchors were exempt from the July closure because their buildings feature entrances and exits separate from the indoor mall.

During the first extended closure in its more than 52-year history, South Coast Plaza has sought alternate ways to drive shopping. In May, it introduced SCP 2Go, a curbside shopping program for more than 70 of its tenants, which include luxe boutiques such as Alexander McQueen and Louis Vuitton.

On Aug. 5, it introduced a special open-air shopping area named The Pavilion. Located in one of the shopping area’s parking structures, it offered 14 private shopping suites that included mobile fitting rooms, floral arrangements and Wi-Fi. SCP 2Go and The Pavilion programs will continue to run.

To enter the mall, consumers are required to wear face masks. The pandemic also changed the operations of South Coast Plaza. The retail center has increased its cleaning regimen, which features protocols established by a certified industrial hygienist and improved air quality with what the retail center described as state-of-the art air filtration and disinfecting lighting.

Despite Newsom’s recent announcement, California’s regions also remain subject to county and city orders, some of which contrast with the governor’s guidelines. This includes Los Angeles County, which has implemented different guidelines for indoor businesses and those that can operate outdoors.

Westfield Century City, headquartered in Los Angeles’ Century City neighborhood, is an outdoor mall. Its specialty retailers, department stores and restaurants have been open since June. A majority of retailers at Caruso property management’s Los Angeles–area sites The Grove, The Americana at Brand and Palisades Village—which are also open-air retail centers—have reopened, according to a Caruso statement. Guidelines to ensure safety at these retail centers include making complimentary face masks available to visitors.

The Beverly Center, a leading mall sandwiched between West Los Angeles and West Hollywood, Calif., has remained closed, according to Jackie Plaza, the retail center’s marketing and sponsorship director.

“Beverly Center will reopen once the L.A. County Health Department adopts the governor’s latest order. Until then, retailers and restaurants are doing curbside pickup. All activities are done in accordance with local laws and mandates and CDC guidelines,” Plaza said in a prepared statement.

Since July 30, Traffic, a veteran Beverly Center multi-brand fashion boutique, has run a stand-alone pop-up shop by Beverly Center’s 3rd Street valet drop-off site. Michael Dovan, a Traffic co-founder, said that his shop’s pop-up has mostly been selling sneakers and basics such as sweatshirts and sweatpants. It has not been selling its luxe items such as designer sports jackets and gowns.

“Surprisingly, business has been okay,” Dovan said of the pop-up. “It has kept us going.”