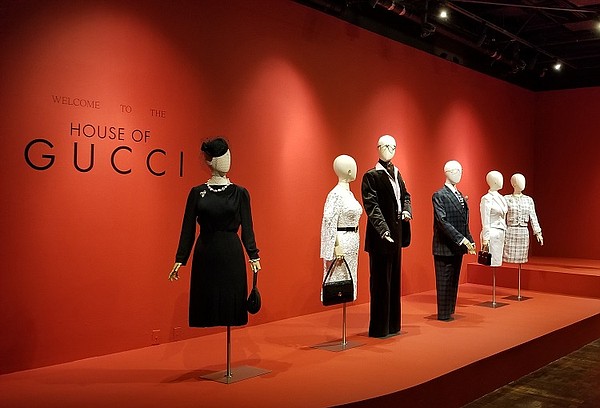 The "House of Gucci" costume exhibition features fashions from the film, in addition to never-before-seen media.

On display at the FIDM Museum until Dec. 4, a selection of costumes from the film "House of Gucci" tie together the dramatic tale of the venerated heritage Italian fashion brand. Metro Goldwyn Mayer and United Artists Releasing recently partnered with the Fashion Institute of Design & Merchandising to showcase costumes from the film, which stars Lady Gaga as Patrizia Reggiani and Adam Driver as Maurizio Gucci, the ex-husband of the famous fashion family whom she paid to have murdered, with a supporting cast that includes Jared Leto, Jeremy Irons, Salma Hayek and Al Pacino. Costuming was led by designer With Janty Yates, while curation of the exhibition and creative direction was implemented by Melina Matsoukas’ De La Revolución. Film stills, unit photography shot during film production, behind-the-scenes photography and cast portraits were shot by photographer Cuba Tornado Scott.

"It is really well done," said designer and co-chair of the FIDM Fashion, Theatre Costume, and Film and Television Costume Design programs Nick Verreos. "It’s great to finally see them up close. When you see the movie, you see them in context. When you enter the exhibition, we have 14 costumes, we have never-before-seen photographs and a video installation showing some of the actors in character in the costumes."

With Yates at the helm of costume design for the film, there was a need to relay notes of wealth and indulgence, but also a family that valued its heritage. Verreos explained the impact the exhibition has as a supportive piece that adds understanding to the importance of the film's fashions.

Sourcing for the films costumes comprised a great effort on the part of Yates and the costuming team, which tapped into different resources to create the perfect fit for the movie.

"Most of the costumes were made and there was a lot of sourcing through 1stDibs, vintage companies and eBay to source for vintage Gucci, vintage accessories and things of the '70s and '80s that she could put in there in terms of the costumes," Verreos explained. "Also, she had access to the Gucci archives."

For the men's suiting, Verreos revealed that the costume designer worked with Italian men's luxury fashion house Ermenegildo Zegna. Also working with bespoke tailors out of London and Italy, Yates brought together the costuming for the men whose looks had to exude the feeling of luxury and conspicuous consumption.

"These were very wealthy men, not only [Rodolfo] but also Aldo Gucci who basically ruled the company—Al Pacino’s character," Verreos explained. "Zegna, three-piece suits, bespoke perfectly custom tailored. They look rich. That was the point. They wanted to look rich."

The "House of Gucci" exhibition will be on display until Dec. 4 at the FIDM Museum located in downtown Los Angeles, from 10 a.m.-5 p.m. Additional information can be found on the museum's website.