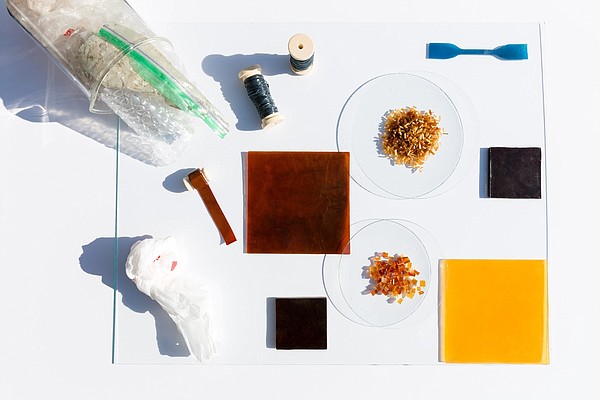 Menlo Park, Calif.’s Novoloop announced on Feb. 23 that it had developed XIRC, a customizable thermoplastic polyure­thane material comprising up to 50 percent post-consumer poly­ethylene waste, which aids in the reduction of trash from single-use plastics. Photo courtesy of Novoloop

Founded during the college years of friends Miranda Wang and Jeanny Yao, the Menlo Park, Calif., BioCellection formed with a goal of developing processes to transform traditionally unrecyclable plastics into materials that could be upcycled into new products. While they originally created a patented Accelerated Thermal Oxidative Decomposition (ATOD) chemical-recycling process, which turned plastics such as shopping bags and wrap into chemicals to make materials such as polyurethane and nylon to create apparel, Wang and Yao realized their true eco vision and rebranded the company as Novoloop.

“Novoloop is made up of two parts—novo and loop. Novo means ‘good as brand new.’ It’s our belief that real recycling, where sustainable materials need to be headed, is that when we take a material at the end of its life and we say, we’re going to recycle it or process it, it really needs to be good as new. It can’t be downcycled,” Wang explained “In terms of ‘loop,’ that speaks to the fact that we strongly believe in creating materials that fit into a circular economy.”

Wang, with a background in engineering entrepreneurship and molecular biology, and Yao, a biochemist and environmental scientist, announced on Feb. 23 the introduction of their achievement, a material named XIRC. Created as a material that is up to 50 percent post-consumer polyethylene waste, which is made through Novoloop’s ATOD process, XIRC is a customizable thermoplastic polyurethane that has met or exceeded the capabilities of virgin plastics when studied in third-party testing. It is also more sustainable and higher performing than synthetic rubber or silicone. XIRC is currently used to create footwear soles and waterproofing elements for clothing such as seam tape and membranes that are used in thermoregulating waterproof apparel.

“All of these critical components that enable the products are made with this thermoplastic polyurethane,” Wang said. “We were comparing our product with virgin ones, and we have seen with aspects such as abrasion and also elongation that our material has outstanding performance, also in terms of dry and wet grip, which are very important properties for keeping a shoe from sliding off a surface.”

To sustain its program, Novoloop maintains partnerships with the City of San Jose in California and waste processor GreenWaste Recovery Inc., while it also counts a Southern California organization among its sources for carbon-rich polyethylene. XIRC provides a solution to a plastics problem that has only worsened over the course of a year.

“The extra packaging we’re getting with our takeout, all of that is single-use plastic, and the majority of that is the type of plastic that we target, which is polyethylene,” Wang said.

During the COVID-19 pandemic, polyethylene use has increased as delivery services rely on products comprising this material including shopping bags, package wrapping and shipping supplies. While the increase is a setback in the sustainable space, it provides resources for the materials necessary to create XIRC, affording an opportunity for Novoloop to illustrate its capabilities.

Third-party testing that compares traditional thermoplastic-polyurethane production with ATOD revealed that the Novoloop technology reduces up to 45 percent of carbon emissions. The company projects that it will eventually reduce the impact of 685 million metric tons of CO2 annually.

XIRC’s potential includes limitless possibilities for use in the apparel space outside of footwear and beyond. Novoloop is currently in discussions for a XIRC partnership with an unnamed activewear and outerwear brand. Wang notes that 58 percent of Millennials and members of Generation Z are demanding recycled content in their goods and about 80 percent of brands are on schedule to meet these demands.

“Footwear sales are skyrocketing because so many people are working from home but still trying to stay healthy,” Wang said. “We believe what we are creating here is not only a cool material or sustainable material but also really solving a problem that the plastics industry has not been able to respond to yet. The way that we’ve been making these performance materials today from virgin resources is outdated. People need sustainability today. That is the future for materials.”