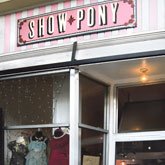 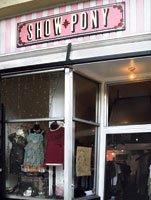 One of Los Angeles’ iconic fashion boutiques is saying farewell on March 6. Show Pony championed independent designers and shaped the look for art-inspired women in Los Angeles since 2000. Although rents had tripled in the boutique’s neighborhood in the last two years, Show Pony owner Kime Buzzelli did not blame the weak economy for her store’s end.

“It was always more a labor of love than a moneymaker for me. I just had a feeling that the time had come to pass the space to a new tenant,” she wrote March 2 in her “The Moldy Doily” blog.

In June, she will debut her collaboration with Cypress, Calif.–based footwear and apparel manufacturer Vans Inc. The collection will feature a pair of high-top sneakers bearing some of her artwork along with canvas pants, T-shirts, hoodies, faux leather jackets and a tote bag bearing the slogan “Sorry Is for Suckers.”

The closing of Show Pony will be a loss for Los Angeles fashion, said Alisa Loftin, owner of Los Angeles boutique Aero & Co. “[Show Pony] embodied the look and the point of view of women on the Eastside and Silverlake. People will look back and say that it captured the spirit of a certain time.”

Show Pony was just one boutique struggling against a tough economy and rents that have been steadily climbing since 2007, said Jen Phillips, owner of the Sirens & Sailors boutique in Echo Park. “So many stores have been closing. I don’t want to be the next one,” she said.

To keep customers intrigued in her store and to help with rent, Phillips has subleased space in her store to Lucy Finch, a vintage store that closed its doors in Los Angeles’ Eagle Rock neighborhood in late 2008. Her new boutique manager, Paul Edward Magalad, also designs his San Paredes fashion line at Sirens & Sailors.

Loftin’s Aero & Co. does business at 8403 W. Third St. in Los Angeles. Loftin estimated more than 15 businesses in her neighborhood have closed since November 2007. She worried independent designers also might be the victims of the recent economic crisis if many of the boutiques serving them are closing.

“In the past 10 years, the fashion industry looked to young talent for inspiration,” Loftin said. “We were hoping these young designers would thrive and grow into bigger companies. But many of them won’t be able to weather this storm.” —Andrew Asch