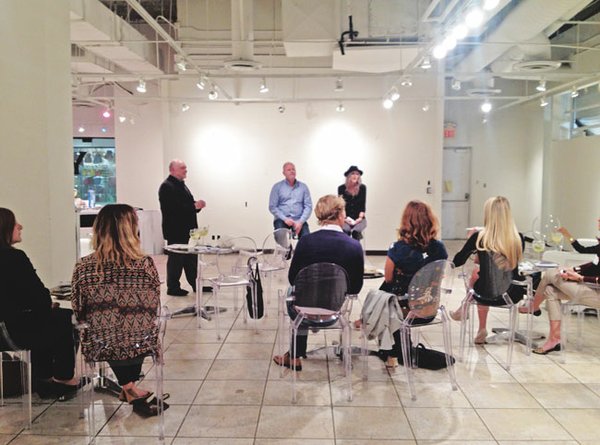 Harnessing the Power of the Social Consumer

The intersection of social media and business—and the increasing power of the social consumer—was on the agenda at a recent informal discussion between Rachael Dickhute, principal of the fashion blog Everything Hauler, and Don Stephens, vice president of information technology for Big Strike Inc.

Robert M. McKee, Infor’s senior product director, global fashion-industry strategy, moderated the discussion, which was titled “Social Business and the Voice of the Consumer.” The event was hosted by software solutions provider Infor and held on Oct. 15 at the California Market Center during Los Angeles Fashion Market.

Social media has given the consumer an undeniable voice, and, today, brands and retailers must listen to the consumer in order to succeed. In order to connect with consumers today, it’s important to supply products they truly want. Brands should be leveraging social media—including Facebook, Twitter, Instagram—to not only engage with the consumer but to also apply what they learn to their business.

“We’re in an industry [where] the objective is to seduce the consumer and control the supply chain,” said McKee, who explained that the retail paradigm, which began to shift in late 2008, gave more control to the consumer. As a result, brands must now adapt.

And more people are beginning to take note, McKee said. By listening to consumers and understanding what they want—whether it’s a specific T-shirt design, a customized product or socially responsible practice—brands can become more efficient and more effective. As a result, their sales willincrease, and they will develop loyal followers and avoid markdowns.

“Because of social media there’s this newfound sense of individuality,” said Dickhute, emphasizing the importance of customization. “It’s almost like [the consumer] knows they have the power. They are aware now. They have their own way of expressing themselves via social media and through their clothing. It’s why people like me exist.” Dickhute’s more than 10 years of experience in fashion public relations, marketing, wholesale and consulting have made her savvy in the blogosphere. She stresses the importance of listening to her followers and utilizing analytics to grow her business, and, she said, the same theory applies to brands.

“Use your analytics,” she said. “If you’re going to collect your numbers—because we all know that you are—then do something with it.”

Newercompanies who have grown from their inception as an offshoot of social media may be in a better position to take advantage of social interaction. However, today all companies—from large department stores to small designer brands—should recognize the growing importance of it.

Big Strike, an approximately $150 million company accorging to Stephens—with brands including Cynthia Vincent, Workshop and Urban Hearts—is largely focused on wholesale business. But Stephens says listening to the consumer is indeed becoming increasingly important. While many companies, including Big Strike, are utilizing social media and communicate internally through social collaboration, many still have much to improve, including communicating directly with customers. Brands would have a huge advantage if they were to begin the process as early as the product-development stage.

“Companies need to do a better job. There’s no question about that,” Stephens said. “Some are doing an excellent job, but I think it’s the mid-tier companies that have the most to do—and we’re part of that. I think that the hope on the consumer side is more and more companies are going to listen.”