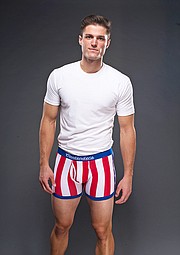 Skateboarding and surfing have launched hundreds of brands, but for John Anderson, the inspiration for the new Contenders clothing line came from one of the oldest of sports: boxing.

In 2014, Anderson teamed up with his brother, Mike Anderson, and Rick Robles to start Contenders, a collection of men’s underwear inspired by the trunks worn by professional boxers. The Anderson brothers were fight fans. That year they had designed swim trunks that looked like boxing trunks. A little brainstorming led them to think the look would make a great-looking pair of underwear, something between fashion underwear and a plain pair of boxers.

But Contenders kept a low profile. It was sold at 20 physical boutiques, including the Andersons’ own Tankfarm & Co. boutique in Seal Beach, Calif. The brothers hoped to develop the brand’s direct-to-consumer business. In the summer of 2015, a new group of financial and marketing partners joined the Contenders team to develop the underwear brand into a clothing collection and bring it to a bigger ring, said Jonathan Snyder, one of the new partners.

For one of its first acts, the new team unveiled a license. It is from one of the only media properties that could have made sense for a line of boxer briefs inspired by boxers. 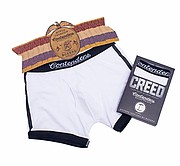 It was the “Rocky” series of films, which follow the life of underdog boxer Rocky Balboa, played by Sylvester Stallone. The seven-movie series launched in 1976 and made Stallone a star and an Academy Award nominee for best actor and best screenwriter. (The original film won the Oscar for best picture of the year.) The franchise recently returned to the headlines with the November premiere of “Creed,” the seventh film in the series. The original “Rocky” will celebrate its 40th anniversary in 2016.

In November, Contenders introduced a capsule collection called Creed by Contenders Limited Exclusive Collection. It offered trunks designed with the colors of the American flag, which were worn by the character Apollo Creed in “Rocky.” An upcoming collection, called Rocky by Contenders Collection, includes boxer briefs reminiscent of the trunks worn by Stallone’s Rocky Balboa character as well as other characters in the movie series.

Like a boxer’s trunk, the brand’s underwear features a contrast waistband and side stripes. Contenders’ main collection comes in nine colorways, including heather gray, white and black. The shorts feature tailoring, which keeps the underwear from riding up. With the Creed capsule collection, new categories were added to the Contenders line, including T-shirts inspired by the styles of the mid-1970s. One T-shirt bears the logo of “Contenders Boxing 1976.” Also available from the line are plain T-shirts the company calls the “Money Tee,” which are made with soft fabric. Wholesale prices points range from $11 to $24 for the briefs. T-shirts will be sold exclusively at the brand’s website (www.contendersclothing.com). The brand will be more active in wholesaling its goods in fall 2016.

The Contenders is one of the projects for the Anderson brothers. They also run the Tankfarm & Co. menswear collection and a multi-line boutique bearing the same name. The Andersons started their fashion business in 2003 by wholesaling graphic T-shirts. They expanded the brand to also sell button-up shirts, outerwear, denim and shorts. In 2010, a Tankfarm boutique was opened in the brand’s former headquarters of Los Alamitos, Calif. More than a year ago, the headquarters moved a short drive away to Seal Beach, where it opened a 1,300-square-foot boutique. In 2014, it opened a store with a yearlong lease at the Americana at Brand retail center in Glendale, Calif. The shop is closing in January. In May, Tankfarm & Co. is scheduled to open another boutique at the high-end Pacific City retail center in Huntington Beach, Calif.