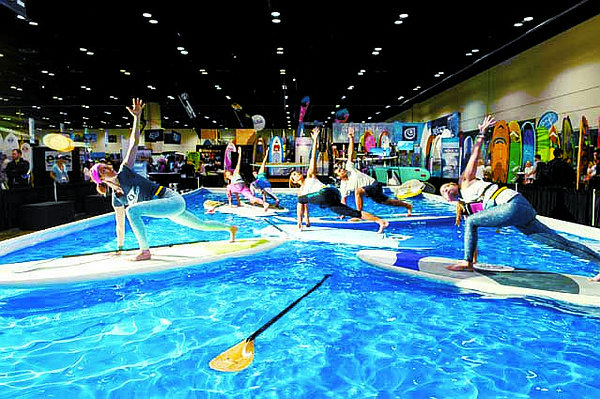 Swimwear Anywear, Skye and Lucy Love on the runway at Surf Expo

While much of the Eastern Seaboard suffered under a cold snap Jan. 8–10, weather in Orlando, Fla., was a relatively balmy 60 degrees Fahrenheit or so, which was a good backdrop to Surf Expo, the veteran trade show for surfing and other water sports.

Surf Expo is the stomping ground for prominent East Coast surf shops such as the Compound Boardshop of Sarasota, Fla.; the Cocoa Beach Surf Co. of Cocoa Beach, Fla.; Ron Jon, also headquartered in Cocoa Beach; and the 17th Street Surf Shop in Virginia Beach, Va. Regional department stores such as Bealls also were spotted at the trade show, as were buyers from Caribbean resorts. Hawaiian retailers reportedly stopped by the show, and California retailers such as Jack’s Surfboards and ZJ Boarding House also shopped the event.

Surf Expo also could be described as a California colony in Florida—30 percent of the show’s vendors come from West Coast clothing labels such as major surfing brands Quiksilver and Billabong, which are headquartered in Orange County. Also attending were veteran surf brands such as Maui & Sons and Katin USA, along with brands such as Los Angeles–based Wellen and beach-lifestyle brand Amuse Society and swim brands such as Manhattan Beachwear, which are both headquartered in Orange County.

California vendors interviewed described a show that was crucial in building business on the Eastern Seaboard. Taylor Gramkow, marketing director for Wellen, said 10 new accounts were opened at Surf Expo.

Maria Sass, a representative for Amuse Society, said that the brand was slammed with appointments—more than 100 during the three days of the trade show.

At Surf Expo, swim giant Manhattan Beachwear built a 20-foot-by-60-foot booth for its swim brands—which include Trina Turk, Nanette Lepore and Hobie—and it had a 10-foot-by-20-foot booth for its active brands. Ron Razzano, the company’s vice president of sales, said attendance at his booths increased 18 percent over the show last January.

Donovan Dartez, vice president of sales for the Element label in Irvine, Calif., said Surf Expo is focused on work. “The productivity levels from a sales standpoint are higher than many shows that we attend,” Dartez said. “The buyers come here knowing that they have to review lines of their key vendor partners.” However, many retailers file show orders a few weeks after the show, not typically at the show.

Element exhibited its Fall ’15 looks, which include Element Flex, which features flannels and bottoms made with stretch fabrics for increased mobility while skateboarding.

Maui & Sons offered Summer and Fall ’15 clothing with the surf brand’s trademarked graphics, which have a retro 1980s and 1990s feel, said Patricia Thornton, the label’s vice president of sales. Thornton said her label had one of the best Surf Expo shows of its more than 10 years of doing business there. However, exhibiting at Agenda and Surf Expo in the same week wreaks havoc with schedules, she said. Many vendors and retailers, exhausted from work at Agenda, find themselves rushing to airports after Agenda closes in Long Beach, Calif., to catch red-eye flights to Surf Expo.

“As vendors, they are making our lives miserable. We pay for the shows, but they are making it difficult for us. We have to be on two coasts at the same time,” she said. It was worse in 2014. There was one day when both shows’ schedules overlapped.

Surf Expo’s Turner said that his company has already scheduled dates for the trade show for the next decade. It’s hard to change them.

“Dates are challenging as production needs, buyer preferences, day patterns, etc., all come into play, and a shift of a single day can often create a bigger headache. With that said, like all major producers we try and provide show dates well into the future to make customers and competitive shows aware,” he said.

Aaron Levant, founder of Agenda, said January is one of the busiest times of the year for trade shows, so it is tough to schedule new times. However, he stated that he had approached Surf Expo several times since 2011 to schedule the shows farther apart.

“We have done everything we can, but they are unwilling to make any compromise on the matter,” Levant said. “It is unfortunate because it affects everybody in the industry.”

Turner said that Surf Expo’s dates have been established for years. “We did speak with the Agenda team as well as confide in our association partners at SIMA (the Surf Industry Manufacturers Association) and found that Surf Expo was positioned where we need to be to best serve our markets both in dates and day patterns,” Turner said.

This year, Levant said he moved the show earlier in the week so people would have a day of travel.

And in 2016 people with business at both shows will get a break. Surf Expo is scheduled to run Jan. 14–16 next year, Turner said. Agenda is scheduled to take place the first week of January.