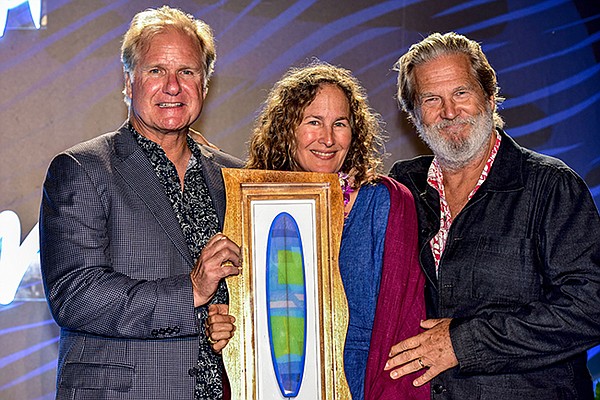 Supporting environmentalism is the main goal of Waterman’s, which is the annual fund-raiser produced by the Surf Industry Manufacturers Association. The Aliso Viejo, Calif.–based trade group aimed to put together $250,000 this year for a range of ocean-focused environmental groups.

But the surf-brand chiefs assembled at the 30th Annual SIMA Waterman’s at The Ranch at Laguna Beach, Calif., Aug. 3 received a striking challenge from Dianna Cohen. The co-founder and chief executive officer of the Plastic Pollution Coalition was honored with the Environmentalist of the Year award to recognize her efforts to help rid the world of single-use plastics. Recently, the United Nations released a dystopian forecast, which revealed that by 2050 there will be more plastics in the oceans than fish.

“You guys are the people who can really drive the change,” Cohen told a cheering crowd, which included Hurley brand founder Bob Hurley and Paul Naudé, founder of the Vissla brand and president of the SIMA Environmental Fund, which spearheads the fund-raising for Waterman’s.

“Your companies can create the change,” Cohen continued. “You really need to take the lead. The Surf Industry Manufacturers Association needs to step up. Your livelihoods and the health of the planet, the health of people and animals and the oceans depend on it.”

Actor Jeff Bridges made a surprise appearance at Waterman’s in order to introduce Cohen and present her with the surfboard-shaped trophy.

Cohen said she co-founded the coalition in 2009 to help tell the world how plastic pollution was devastating the oceans. The group has been successful, with organizations as diverse as the Girl Scouts and the Teamsters joining the coalition to help rid the world of single-use plastics.

With all these gains made by the coalition, Cohen also noted the challenges faced when attempting to shift the methods used to address plastic pollution. Countries such as China, the Philippines and Malaysia have made headlines in the past year by refusing to accept and destroy plastic waste from the United States, Canada and Western Europe. “We got to stop thinking that we’re going to recycle our way out of it. We’re not,” Cohen said of the plastics-pollution crisis.

Cohen’s remarks came as a rare challenge at the annual event, which in the past has maintained an atmosphere of a lighthearted industry get-together rather than an activists’ meeting.

The comments were delivered at a time when more surf brands are adopting sustainable-manufacturing practices. In the past, surf brands have been criticized for paying lip service to sustainability. One big issue was that surfboards had been manufactured out of materials that contain toxic chemicals. In the past decade, companies such as Firewire Surfboards have introduced boards constructed out of sustainable materials, while apparel brands such as Volcom, Outerknown and Vissla have embraced sustainable-manufacturing practices for their clothing.

SIMA will be rolling out a few sustainability initiatives of its own. On Aug. 22, it will produce a talk called “Sustainability in Our Industry: Moving Beyond Recycled,” which will take place at the headquarters of the Vans brand in Costa Mesa, Calif. The event will be open to the public, with tickets available at a cost of $65 to nonmembers.

Waterman’s has raised almost $9 million for environmental groups over its three decades of environmental philanthropy. The 2019 SIMA Environmental Fund grant recipients included the research and advocacy group 5 Gyres Institute, which also is a founding member of the Plastic Pollution Coalition. Other recipients were the Assateague Coastal Trust, Clean Ocean Action, Heal the Bay, the North Shore Community Land Trust and the Ocean Institute.

Also honored during the Waterman’s event was surf luminary Mark Richards. The four-time world surfing champion was presented with a Lifetime Achievement award. Kai Lenny was honored with the Waterman of the Year award. “I’ve been surfing since I was 4 years old,” said Lenny. “I probably still have not gotten the wave of my life.” The 26-year-old is known for being a man for all water sports, including big-wave riding and windsurfing.