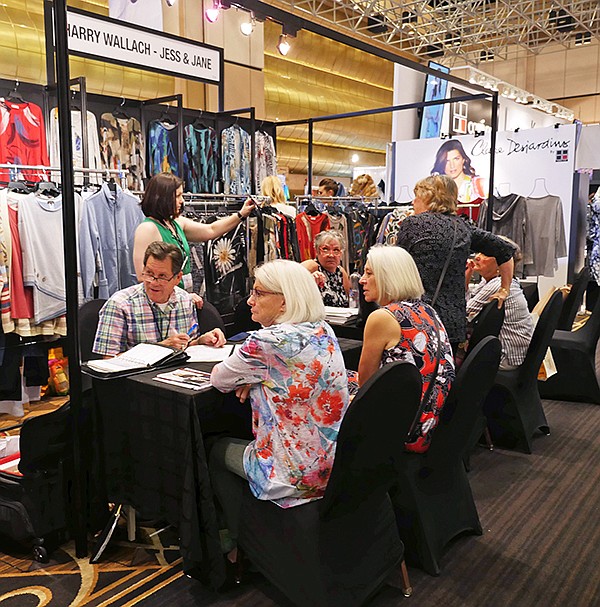 The scene at WWIN

While buyers were searching for Fall and Spring at the WWIN | Women’s Wear In Nevada show, which ran Aug. 12–15 at the Rio All-Suites Hotel & Convention Center in Las Vegas, the big news was the event’s upcoming move. For its August 17–20, 2020, show, WWIN will move to the Caesars Forum Conference Center, which will open next year.

During this August edition of the show, business was good at WWIN, according to exhibitors.

“It was quiet, but the buyers who were at the show were buying,” said Eli Pirian, president of the Baciano label. He exhibited his Los Angeles brand’s line of sweaters and sweater tops, with wholesale price points ranging from $30 to $60.

Michael Ingle, a partner in the San Diego–headquartered Lyng Designs, also reported good business. He estimated that his sales grew 50 percent over last August’s edition of WWIN. “The show was good, but we could have used a little more traffic,” he said.

Show producers hoped to set the stage for lucrative buyer meetings with the show’s Match! Buyer Program, which was introduced in February. Show workers sought to match like-minded buyers with vendors with a tech-enabled matching process, according to Hannah Reagan, WWIN’s marketing manager. Vendors pay an undisclosed fee for the Match! program. The show also supplies a no-frills matchmaking app where buyers and vendors can make their own matches without the help of show workers.

Heidi Shubin, co-owner of Sugardaddy’s Boutique in Bakersfield, Calif., said that the Match! program was worth the cost. “I found two vendors that I would not have seen if I wasn’t in Match!,” she said. If a buyer liked what he or she saw on the website, the buyer could make a connection to a vendor. Show workers also were available to make face-to-the buyer face connections, she said.

Shubin also talked about trends. “The odd colors are back—the purples and the mustards,” she said. Tie-dye has been popular, and there’s been a surge in cheetah prints. “Year after year, we always have something cheetah, but in early Spring, there has been a lot more of it,” she said.

Other programs at the event included Fresh@WWIN, which provided a platform for emerging designers. WWIN also produced seminars such as a social-media and marketing seminar presented by Ilse Metchek, president of the California Fashion Association. In the seminar, “Tracking Megatrends 2019,” Metchek said creating a compelling social-media experience is crucial for retailers. “You need to follow up with in-store displays depicting what’s on Instagram,” she said. “If you’re not doing a shopping cart, at least change your website every month, just like your [store] windows.”