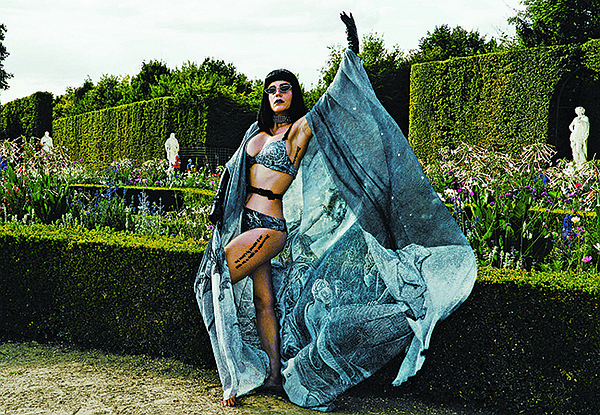 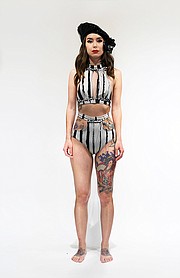 Cuoco introduced her label’s first swim line, The Book of Judith, for the woman who does not fit into any of the standard swim looks designed by many labels.

There are a number of women who don’t want to play the ingénue and look like they are posing for a swimsuit pictorial at a beachside resort. There are others who don’t want swimwear’s sturdy, athletic looks either. 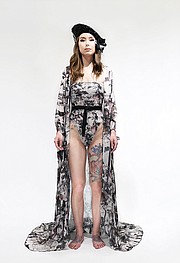 Cuoco thought her kind of woman would be interested in another aesthetic associated more with Goth nightclubs instead of swim parties.

“There’s a darker, romantic side, which my line is known for,” Cuoco said. “The images in this line tell a story in themselves. It’s about triumph through loss,” she said about persevering through adversity.

The Book of Judith was introduced last year during Miami Swim Week in Miami Beach, Fla. Since its debut, it’s been a work in progress as Cuoco introduces new pieces to the now 14-piece line. She relies on customers telling her what they like and what they’d drop from the line.

Mostly through social media, fans told her to cut string bikinis. “People don’t come to Candice Cuoco for simple. They come for the depth, the romance and the design,” she said.

The influences of Cuoco’s swim line veer sharply from swimwear’s typical obsessions with sun and good times. The line was named after the biblical heroine Judith, who liberated her people by ingratiating herself with a general from an invading army. Later, she chopped off the general’s head.

The swimwear’s prints were inspired by the blue-and-gray woodcuts of 19th-century French artist Gustave Doré, who was famous for his artwork depicting literary epic scenes from Cervantes’s “Don Quixote” and Dante’s “Inferno.”

The line’s silhouettes include triangle bikini tops. There are also bikini tops shaped like the mid-20th-century bullet bra that actress Jayne Mansfield helped popularize in the 1950s and Madonna wore during her 1990 “Blonde Ambition” world tour.

Cuoco made the bullet top her own by sewing custom stitching on the bullet bra–style tops. Another one of The Book of Judith’s pieces resembles a corset.

Retail prices for the collection, sold at candicecuoco.com/shop, range from $95 to $125.