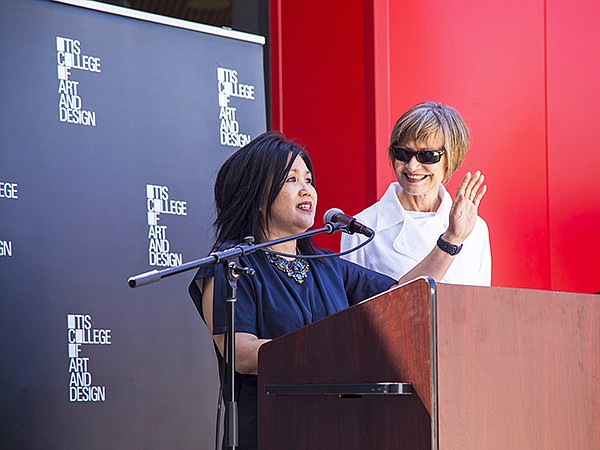 Star swimwear designer Anne Cole served as a mentor and major fund-raiser for the Otis College of Art and Design in Los Angeles’ Westchester section before she passed at age 90 in 2017. Just as the 2019–2020 academic year started, Anne Cole’s estate bequeathed $2.5 million to Otis. The gift will endow the Anne Cole Scholarship Fund, which will offer financial assistance to fashion-design majors. On Sept. 6, Otis marked the gift with a ceremony to name a building after the influential swimwear designer.

The four-story, platinum LEED–certified Anne Cole Building will house classrooms and studios where student designers will study and work at the campus, which is relatively new. In 2016, the school’s fashion department moved from downtown Los Angeles’ Fashion District to Westchester, and it is still growing, said Mei-Lee Ney, Otis’s chair of the Board of Trustees.

“Gifts like this change lives,” Ney said to the crowd assembled for the naming ceremony. “Not just the lives of students who receive funding but also the teachers and the communities that benefit from their creativity. We couldn’t do without that kind of support.”

Rosemary Brantley, the chair emeritus of the Otis fashion department, said that Cole was one of the school’s biggest supporters. 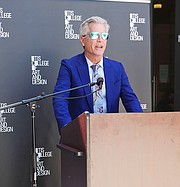 “She was the matriarch of swimwear in the nation for decades. She was a size small but with enormous stature. She was a woman who was absolutely destined to give back,” Brantley said.

Cole was generous with her time, and she always went above and beyond the call of duty. She also served as a mentor to Jill Higashi Zeleznik, Otis’s current fashion chair.

“Anne donated the very best materials,” Brantley said. “All of the bolts of Lycra she donated could stretch from here to downtown Los Angeles. She wrote lots of checks and was responsible for the sales of a lot of tables [at Otis’s annual benefit and fashion show]. For all of this, at least we could give her a fitting space. We named the Anne Cole Fitting Theater [which was in Otis’s former downtown Los Angeles location] for her in 2008. And now, here she is with a whole building.”

Ending the ceremony was Rod Beattie. He is a 1986 Otis graduate and currently serves as creative director for the swimwear label Bleu Rod Beattie. He also worked as a chief designer for the Anne Cole Collection in the 1990s, and the pair remained lifelong friends. He remembered Cole’s design achievements.

“She believed that the woman should wear the suit and not the other way around,” Beattie said. “In 1998, Anne and her design team created the tankini silhouette. This two-piece silhouette revolutionized the swimwear industry and is an industry classic today. Anne had a knack for surrounding herself with the most talented people, who understood her vision and made it a reality.”

The Anne Cole Building has been instrumental in giving more of a sense of place to the Westchester campus, said Joseph Coriaty, a managing partner in the architectural firm of Frederick Fisher and Partners. His firm also designed the Annenberg Center for Information Science and Technology building at the California Institute of Technology in Pasadena, Calif., and the Firestone Library at Princeton University in Princeton, N.J.

Coriaty worked with the firm Ehrlich Yanai Rhee Chaney Architects to create the Anne Cole Building, which is located adjacent to a 230-bed dormitory. The building that bears the Anne Cole name and the dormitory are new structures that were unveiled in 2016. Situated across from two preexisting buildings, these additions created a campus environment, Coriaty said.

“It was about placing the buildings to make a central-campus town square. The ground floors of the new buildings offer student services,” Coriaty explained. “They create a place where students from different disciplines come together in a collaborative way.”