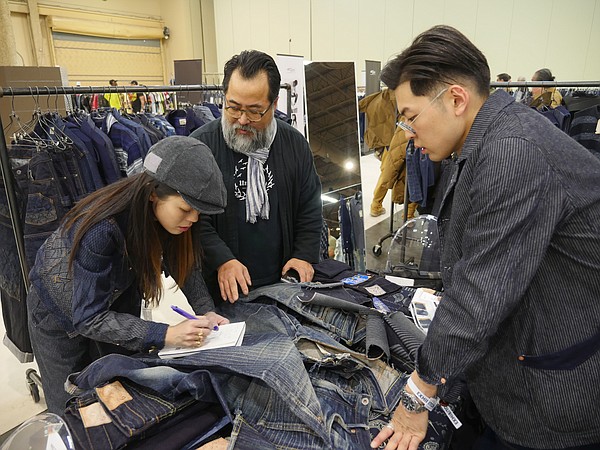 Project rolled out the 12,000-square-foot Denim Room section at the Feb. 5–7 run of the contemporary trade show at the Mandalay Bay Convention Center in Las Vegas.

Lizette Chin, Informa’s president of men’s, who directs Project, reported that she and her staff received enthusiastic responses on the denim-focused section. Project staff intends to continue building out the section and forecasted that they will use it as a bridge to connect the men’s section of Project and Project Womens in future shows.

Brands exhibiting at Denim Room include established jeans labels such as Lucky Brand, Silver Jeans, 7 For All Mankind, Paige and Parasuco as well as emerging brands. Los Angeles’ Trinidad3 jeans was honored with a best showpiece award for its Barron for Trinidad3 jeans.

Yuuki Ogura manages Project’s Japanese show, Project Tokyo. She produced a delegation of several Japanese brands for a special section of Denim Room. These brands included Graphzero, Norbit by Hiroshi Nozawa, TAAK, Fagassent and Vuasa. Luke Cho of the independent boutique Mild Blend Supply Co., estimated that he ordered $60,000 worth of goods from this section for his high-end denim boutique in Chicago. “This section keeps the culture alive,” he said of brands that make jeans in an artisanal style. “They make denim the old way—it’s not mass produced.”

Other sections of Project included District, which is devoted to lifestyle brands inspired by skateboarding and streetwear. One of the brands exhibiting was Crooks & Castles, the influential Los Angeles–headquartered streetwear line. Crooks & Castles was recently licensed by Montreal-based MLG Brands. It exhibited an extended Fall-season collection for C&C. MLG also made Crooks & Castles tops, which were worn by Project staff during the show.

Adjacent to District was Project N:OW, a 10,000-square-foot section that was anchored by a sprawling booth produced by the prominent Champion brand. The section also hosted trade-show debuts for the Los Angeles brand Night:Shift, which makes stylish bedding, loungewear and apparel. Another brand exhibiting was RipnRepair, a Los Angeles brand inspired by the Korean American experience.

Retailers shopping N:OW included Zebra Club, an influential Seattle boutique. Jackie Nguyen, a Zebra Club buyer, said that she saw variations of tie-dye such as marble dyeing. Nguyen said that tie-dye was here to stay. “It’s like camouflage and plaid. It’s a classic,” she said.

Also shopping was Damien Percy Roderick. He’s better known to hip-hop fans as Big Percy, who works as manager to music star Snoop Dogg. He was shopping for his store, The Place Vegas, which is based in Las Vegas. He said the overarching trend in fashion is vintage. “I got a 14-year-old daughter. All she wants is vintage,” he said.