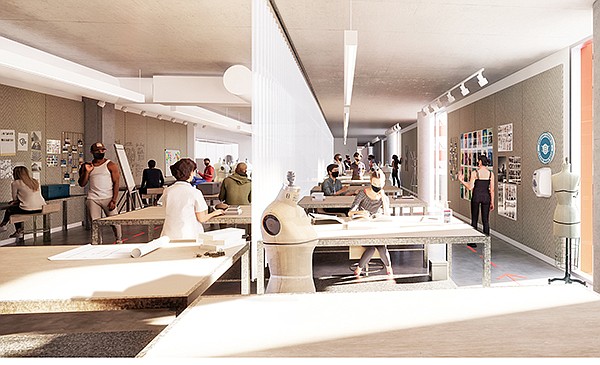 This rendering shows how Otis intends to reopen its fashion-department studios, allowing for proper spacing between students while also openness for instructor feedback and collaboration.

A recent report from the Otis College of Art and Design provided details regarding how California’s creative businesses, including fashion, were dealt major setbacks during the spread of COVID-19 and how these industries were faring just before the pandemic.

The 2021 “Otis College Report on the Creative Economy,” which was produced with the independent research-and-consulting firm Beacon Economics, LLC, found that between February and December 2020, total job losses in the creative economy workforce were 13.3 percent across California and 23.5 percent in Los Angeles County. Creative-economy jobs also include those in the entertainment industry.

“We’re living in extraordinary times. You’ll see in this year’s report that the creative economy has shrunk for the first time since the Great Recession of 2008,” Hirschhorn said. “You’ll find evidence of the growing importance and strength of the creative economies alongside the destruction and disruption that the pandemic has created.”

Democratic Los Angeles Congresswoman Karen Bass also spoke at the seminar. “It’s no secret that COVID has devastated parts of our economy, but the job losses in the creative economy have been especially dramatic, and outside of Los Angeles it’s been relatively unknown,” Bass said.

Bass and some of her colleagues in Congress have sought to support creative workers by increasing Paycheck Protection Program funds for creative-economy businesses and by extending financial support to creatives.

The report took its pandemic-year data from the Bureau of Labor Statistics. However, it derived its most-detailed snapshots of individual creative industries, such as fashion, from 2019 BLS data, which reflects the most-recent information.

While fashion remains one of the strongest creative industries in the state and Los Angeles County, the report found that the fashion industry’s employment numbers were declining before the pandemic.

In 2019, it found that fashion businesses, ranging from retail to design and production, employed 108,142 people across the state. These employment numbers were down 15 percent compared to 2014 numbers. The largest decline came from apparel manufacturing, which reported a decline of 20,730 jobs, or a decrease of 38 percent, between 2014 and 2019.