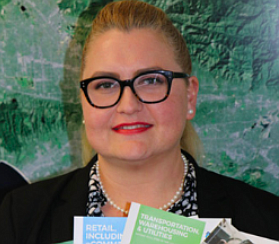 With COVID-19 vaccines being rolled out, economists are charting what happens after one of the most dramatic economic shocks in American history.

Post-COVID Recovery Needs To Include People of Color, LAEDC Said

With COVID-19 vaccines being rolled out, economists are charting what happens after one of the most dramatic economic shocks in American history.

A recovery is on the way, but speakers at the annual forecast of the Los Angeles County Economic Development Corporation, which produced the event virtually on Feb. 17, discussed how the opportunities for restoring economic health need to be spread equitably and how Los Angeles and the rest of California can take the reins in the upcoming recovery.

During the LAEDC Economic Forecast, which carried the subtitle, “A Tale of Two Recoveries,” speakers talked about how Wall Street has recovered much of the wealth it lost in the past year of the COVID-19 shutdown but that Main Street is still suffering, particularly small businesses and ventures owned by people of color.

“The pandemic has had disparate effects on women, people of color, low-wage workers, workers who are younger and with lower levels of education, small businesses, and service sectors,” Sedgwick said.

She forecasted that a majority of businesses will return to pre-pandemic levels of employment by 2024. Interpersonal activity will probably resume by the third quarter of this year, she added. Governments and businesses have the opportunity not to repeat mistakes of the past. For the upcoming recovery, resources need to be better allocated to address California’s long-term issues of economic inequity so the state is better equipped to handle future economic crises, Sedgwick said.

During the session, the LAEDC showcased panel discussions in which various groups talked about programs to develop job skills for people from economically disadvantaged backgrounds. On one panel, representatives of the Rancho Santiago Community College District, Northrop Grumman and Amazon Web Services talked about training people to work in high-paying technology jobs.

Forecast speakers argued that spreading the wealth of economic recovery will be a key to keeping economies competitive. “The regions that will be world leading will be those that can build a racially inclusive economy, where diversity equals dynamism, where talent, not low taxes, will lead to a prosperous future,” said Amy Liu, vice president and director of the nonprofit Brookings Metropolitan Program. One of the initiatives she recommended for economies to become more racially inclusive was for companies and local governments to diversify their base of vendors to include businesses run by people of color.

The upcoming recovery will get a major boost from a new federal stimulus, said Bruce Katz, the director of Drexel University’s Nowak Metro Finance Lab, which is based in the Washington, D.C., area.

However, upcoming programs may not have a focus on small businesses because the federal stimulus unveiled in December had a small-business focus, Katz added. He forecasted that the American Rescue Plan would focus on investments for things such as infrastructure and human capital. “The bottom line—the major message—is get ready because the funding is coming,” he said.

Katz also recommended that local governments have to be smart about the upcoming funding. “Federal investments are coming, but they will only be as effective as local implementation. If we have learned anything since this virus started it’s that the federal government can send resources,” Katz said. “But cities, counties and states are the places that actually have to deliver and implement.”