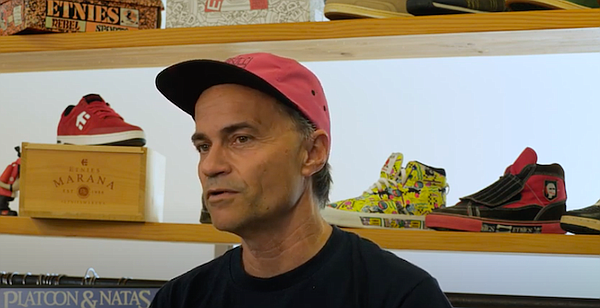 Thirty-five years ago, Pierre-Andre Senizergues was a French skateboarder looking for a sneaker that was going to be durable, while feeling good and looking good. When he couldn’t find one, he vowed to make his own.

He moved to California, and debuted the Natas high-top pro-skateboarding shoe.

Fast forward a few decades, his brand Etnies is a multimillion dollar footwear and clothing label in Orange County, Calif. that is distributed to more than 50 countries around the globe.

In January, it observed a low-key 35th anniversary celebration by posting a video on the company’s history. Highlights include a special concert by the Beastie Boys during a 25th anniversary party, a ‘buy a pair of shoes, plant a tree’ program that has resulted in 2 million trees being planted, and striving to become a carbon-neutral manufacturer.

Senizergues said that his company grew because it aspired to be a good global citizen along with looking good and having fun.

“I'm proud of many of the accomplishments from the global Etnies family over the past 35 years. While many brands fight to win at any cost, our form of satisfaction is measured by how big the smile is at the end of the day. As the world around us rapidly changes, the one thing that won’t change is our push to continuously create the biggest smiles around the world. Our push to create the best products that perform in the most amazing experiences. Our push to unite the global Etnies tribe as one big family and hopefully in the end, make the world a better place,” he said. 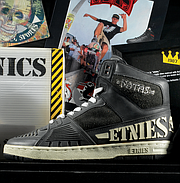 Etnies' Natas sneaker made a debut in 1987

Etnies Baspat sneaker was introduced in 2020