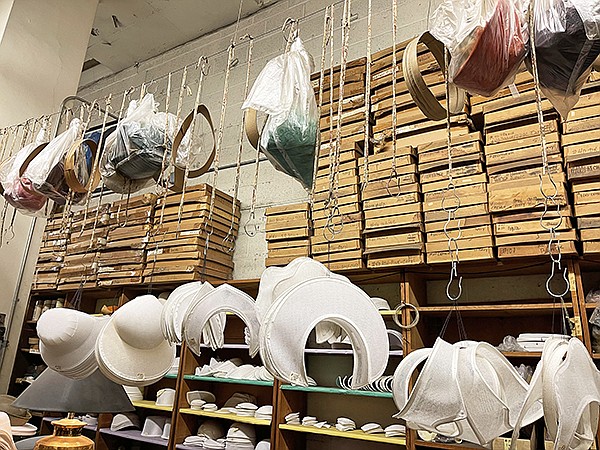 A fixture in downtown Los Angeles and a valuable resource to the city’s fashion and entertainment-costuming industries, California Millinery Supply Co. is in danger of shuttering due to challenges stemming from COVID-19 economic strain.

Irene Arroyo, the company’s owner, estimated that her sales have declined 90 percent from 2020 and 2019. Film and television productions, which made up a significant part of her business, shut down during the pandemic,.

She received a Small Business Administration Economic Injury Disaster Loan/EIDL to help the business get through the pandemic, but she said that once the money is spent she’ll have to liquidate her business if it is not sold. She has not formally put up for sale the 3,500-square-foot location in the Van Nuys Annex building, which includes retail space as well as a studio where Arroyo manufactures hat frames.

However, a unique business requires a unique owner, Arroyo said. “It’s such a niche. It takes someone who knows about all the intricacies of vintage goods, vintage period work, millinery and costumes.” She has owned and run the business since 1982 after working as a costume designer and earning a master of fine arts degree in theater from the University of Southern California.

Sales at her shop typically range from $10 for an order of an individual hat frame and some fabric to hundreds of dollars for orders from costume departments at film and television studios.

One of Arroyo’s customers, Lilian Raven, said that if the store closes California designers would lose a one-of-a-kind resource and an important touchstone for design lore. “It’s a landmark. She has so much history in this store. She has so much knowledge,” said Raven, a sewing contractor, sewing teacher and custom-clothing designer for her self-named label Lilian Raven Clothing. “It’s a classroom. You can walk in and get your education, get some advice, get some cheery conversation and cuddle her cat.”