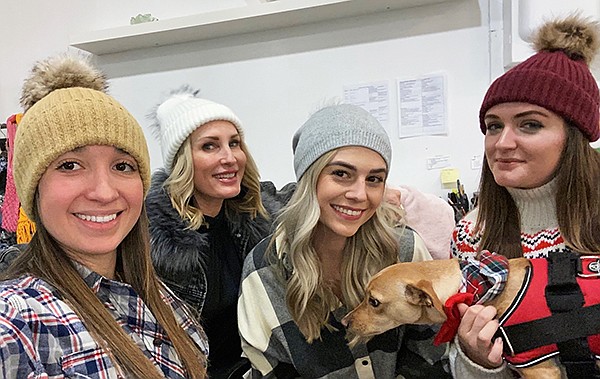 Buyers and Brands Work Together During L.A. Market Week to Protect Businesses

As retailers sought to refresh inventory, they found lines such as the Lana Collection at CMC’s Sharon Koshet Sales (above), shirts including tie-dye styles at the New Mart’s Tramever Inc. Showroom (below)

As Los Angeles County continued to grapple with surging COVID-19 numbers, apparel businesses worked together to fortify their operations. During L.A. Market Week, which was held Jan. 10–14 in downtown Los Angeles, showrooms welcomed buyers to view lines in person while they also afforded the option of online meetings via Zoom. At the California Market Center, Cooper Design Space and The New Mart, business was not conducted as usual, but it was performed to the best of everyone’s ability under sanitary and secure conditions.

“As long as we’re Zooming, getting orders and staying positive—that is all that matters,” Koshet said.

For much of the past 10 months, she has conducted the vast majority of her business through FaceTime, Zoomand in-person road appointments. She estimated that she conducts three to four Zoom appointments daily. An assistant does leg work by sending images of goods to retailers, and then orders are made with Koshet over a Zoom call. The virtual platform has increased the reach of her sales across the country. “I get even more new accounts now,” Koshet said.

One of her clients is Eloise Goldberg, who owns the City Lites boutique in Bermuda Dunes, a community near Indio, Calif. “Since the pandemic, everyone likes comfy, comfy,” she said. Styles trending in her store have included tops bearing overall novelty prints. The La Forme’ Jeans brand has also been selling well. She is cautiously optimistic about the next few months. “Everything will be Immediate delivery. We’re still selling a ton of masks,” she said.

The Tramever Inc. showroom was scheduled to make a market debut of its new space, which opened in the fall at suite 802 of The New Mart. Due to the pandemic, Tramever Inc. President Revi Green-Johnson conducted most of her market meetings through Zoom.

“Retailers are buying very carefully,” Green-Johnson said. “We got some reorders.” The showroom focuses on junior’s, men’s, plus and misses. It represents the line Marci, which Green-Johnson started in 2016. The knits line focuses on quick turns, with orders placed just six weeks before delivery, she said. Tramever also represents licensed apparel including 90s Legends, a line produced by the Cross Colours label.

Veteran New Mart showroom owner Lisa Lenchner rebranded to the name LK Showroom and unveiled a new website, lkshowroom.com, which features videos of Lenchner and her daughter and business partner Shannon Kane exhibiting lines. Lenchner estimated that she conducted the same number of virtual appointments during market as she would have conducted at an in-person show. “There is business out there. Stores are open. It’s a matter of getting them on the phone,” Lencher said.

Valerie Forlizzi, owner of the Toscana Moon Boutique in Simi Valley, Calif., and a partner in the clothing line Lululuna, has worked with Lenchner and said that trends have remained the same since the pandemic began. “Comfortable, cozy and loungewear,” she said of the styles that were selling. Maxi dresses have also been selling well at her shop.

Ethan Eller, The New Mart’s general manager, said that 87 registered buyers made in-person visits, with about 70 percent of the showrooms open for appointments. A handful of out-of-state retailers attended the show.

Creating connections at the Cooper

At the Agency Showroom, located on the Cooper’s second floor, accessories for Spring and Summer were selling well, as a few local buyers visited the space and others explored fresh styles on Zoom. Meetings via Zoom were conducted with Free People, Simons, TJX, Anthropologie and HSN. Buyers were searching for Immediates and Spring, in addition to majors buyers ordering Fall.

“For Spring, buyers are very focused on the bucket-hat trend, and our line Virginia Wolf has some tie-dye, ones that Free People loved among others,” Holmes said. “Also, Virginia Wolf has beach wraps that can be worn a dozen ways, and every S/S season, buyers order these up like crazy as they are the most useful and cute accessory for the beach! Our resorts love them, too!”

Elisa Bruley of the Elisa B. boutique located on East Holly Street in Old Pasadena has gone digital this season as she focused on e-commerce at elisab.com. Aside from a few clients Bruley knows well, the bricks-and-mortar location is temporarily closed due to rising coronavirus cases. To refresh inventory for her 28-year-old business, Bruley visited the Marked showroom virtually, searching for Summer and pre-Fall deliveries in casual pieces from her trusted brands Heartloom and Daydreamer.

“One of the big trends that has been strong for Summer/Fall and into pre-Spring, Spring and Summer this year are two-piece sets in sort of an ‘elevated loungewear’ look that Heartloom does really well,” Bruley explained. “There were some neutrals that looked really good, some sky blue, yellow—and I know yellow is a big color for Spring and Summer, which it always seems to be.”

Additionally, Bruley noted that the price points she found at the Marked showroom were a comfortable range for shoppers who were staying at home but wanted updated casual pieces. While she continues to take precautions to remain safe, Bruley was optimistic about the future.

“As ridiculously bad as things are right now, I am optimistic that things will get better by the time these deliveries hit the floor,” Bruley said. “I remain optimistic—cautiously—but I am optimistic.”