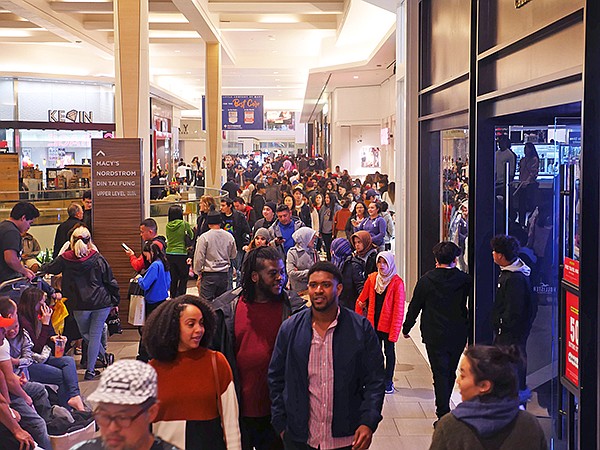 Super Saturday is Dec. 21, and predictions for one of the final shopping days before Christmas are positive. It’s forecasted to be the busiest shopping day of the holiday season, according to a number of holiday business watchers such as the National Retail Federation, the nation’s largest retail trade group.

The NRF forecasted that 148 million U.S. shoppers plan to shop on Super Saturday. It’s an increase from 134.3 million who shopped on Super Saturday in 2018, said Matthew Shay, the NRF’s president and chief executive officer. The forecast was released Dec. 17 based on data from a survey that the NRF conducted with Prosper Insights & Analytics.

“The last Saturday before Christmas has become the biggest shopping day of the year, and we expect an impressive turnout by procrastinators and those who just want to take advantage of really good deals,” Shay said. According to another NRF survey, consumers will spend an average of $1,047.83 during the holiday season, up 4 percent over the $1,007.24 during the 2018 season. The organization forecasted that the holiday season’s sales would range from $727.9 billion to $730.7 billion, for an increase of 4 percent over the 2018 holiday season.

Forecasts from other market researchers also predicted that Super Saturday will live up to its name. Britt Beemer, founder of the market-research firm America’s Research Group, forecasted that more than 47 percent to 57 percent of U.S. shoppers would likely do their shopping the last week of the season.

“People are waiting for the last week before Christmas,” Beemer said from his office in Summerville, S.C. “There will be better deals for Christmas. You’re going to see incredible shopping levels in stores between now and Jan. 3.”

Similar to other forecasters, he noted that historically low unemployment and relatively high consumer confidence have made shoppers more comfortable with opening their wallets. Like the NRF, he also said that deals would help fuel the home stretch of shopping.

Another reason for the increase in spending is what Beemer said would be an increase in corporate holiday parties, according to a poll of caterers in the New York City area.

Luxury shopping will make up another important part of the last week of the 2019 holiday season. High-end shopping is not a big focus of Black Friday, Beemer said, but it becomes a focus later in the season when people go to Christmas parties. He claimed that while this luxury customer may comprise only 7 percent to 11 percent of the U.S. population, this customer will account for one-third of the revenue earned by apparel retailers during the season.

Beemer also forecasted that gift-card purchases will surge this year.

Some of the popular destinations for shoppers on Super Saturday will be digital retailers, mass retailers such as Walmart and independent retailers doing business in traditional, urban business districts. “Small, local, independent retailers will have the biggest increase in shoppers,” Beemer said. “Their customers will be the younger people, under 35.”

When this group shops for items that are not commodities, they are drawn to boutiques for their experiential edge and to get product advice from a boutique’s staff.

The 2019 holiday season also has benefited from relatively good weather. “There have been no blizzards, snowstorms or icy roads to bring down crowds,” Beemer said. “There are years where blizzards bring down traffic 15 percent. It’s unpredictable. When it does happen, it’s deadly.”

Planalytics Inc., a company with offices in Berwyn, Pa., and in London, advises businesses on how to plan their strategies around weather. While there have been no extreme weather events during the season, the company noted that temperatures had generally been colder and wetter around the country during November. But during the first half of December, temperatures became slightly warmer across much of the country. The days leading into Super Saturday should be a bit cooler before a relatively warmer trend in the days leading up to Christmas. Temperatures will then cool during the week between Christmas and New Year’s Day compared to the same time the previous year, said David Frieberg, a Planalytics spokesperson. “It’s a bit of a see-saw situation,” he said.

Weather has been cold for consumers who live in the Midwest or along the Eastern seaboard. In early December, an arctic cold front covered much of the upper Midwest and Northern Plains, and the cold air made its way into the mid-Atlantic region, even Miami, Fla., where temperatures hit a high in the 60s.

Consumers often stay at home when it rains and snows, said retail consultant and boutique owner Mercedes Gonzalez of the New York City–based Global Purchasing Companies and Just Shop Boutiques in New York state’s Catskills region and in Union City, N.J. Bricks-and-mortar boutiques can make sales when weather is bad, she said, but retailers can’t count on consumers coming to them.

“One tip is to take advantage of the fact that it is too late to order some things online. Retailers should be calling their clients and asking if they need any last-minute gifts,” she said. “Retailers could offer free delivery and, of course, gift wrapping.”

Gonzalez said that boutiques and larger retailers have kept their inventories lean during this holiday season. Retailers might be sold out of inventory after the New Year, so she had a bullish forecast for January trade shows. “January market will be strong; everyone needs Immediates,” she said.

Since inventory was generally lean, retailers have not offered highly generous promotions and discounts. However, discounts continue to be major attractions of the season. A visit to a mall may find retailers offering discounts ranging from 20 percent to more than 50 percent off retail prices.

Market researcher Coresight Research further investigated holiday deals being offered in digital commerce channels. In a study released last week, it analyzed deals on the digital commerce channels of Amazon.com, Macys.com and other retailers. With the artificial intelligence DataWeave program, the New York–headquartered Coresight compared deals on electronics, furniture, health and beauty, as well as men’s and women’s fashions during Black Friday and Cyber Monday.