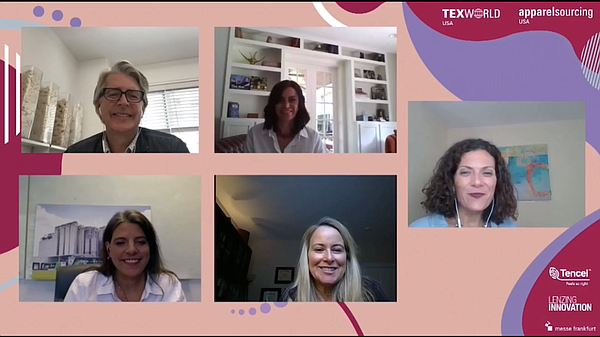 Exchanging its space at New York City’s Javits Center for a virtual model, Texworld USA and Apparel Sourcing USA hosted its inaugural digital event July 21-23. Produced by Messe Frankfurt North America, the event drew a virtual crowd with its innovative approach to digital trade shows that have become a popular alternative for apparel-industry professionals who are unable to travel and convene in large groups due to the COVID-19 pandemic.

Reporting attendance of 4,000 during the event, Jennifer Bacon, show director of fashion and apparel for Messe Frankfurt North America, also noted the global reach of the show. The virtual edition attracted industry professionals from 93 countries, which she said was an increase of 20 percent over previous shows for its global presence. In the virtual space, Bacon sought to create an event that still offered an environment similar to an on-site show.

“The biggest challenge that we faced transforming our summer edition into a virtual event was creating the same sense of community as our physical shows,” Bacon said. “We worked very hard to ensure that our platform utilized the AI-powered matchmaking features to assist in meeting the buyers’ sourcing needs as well as including hosted meet-ups to support connecting and cultivating business relationships.”

Despite a bit of a learning curve and a tough business climate, Texworld USA vendors found a lot to like about the virtual show. Many found it to be user-friendly and an efficient way to tell buyers about their products. Design Knit Inc., a Los Angeles–headquartered textile knitting mill, exhibited new fabrics as well as sustainable textiles, said Pat Tabassi, Design Knit’s product development and marketing manager.

“I didn’t know what to expect. We had nothing to compare it to. Even prepping for the show was a different experience,” she said of her company’s first virtual show. “But this is modern-day exhibiting. We want to be part of that show experience.”

Like other exhibitors, Tabassi and her staff conducted meetings from home offices and occasionally showroom spaces. Photographs of Design Knit products were uploaded to the company’s virtual showroom on the Texworld site. Buyers clicked on thumbnail photos of fabrics to indicate interest. Tabassi and her team promised to send swatches after the show.

“I think that the virtual platform is more accessible,” Tabassi said. She had a meeting with a buyer who said that she wouldn’t have been able to attend the show if it was in person.

Partnering with Texworld USA and Apparel Sourcing USA, Fashiondex’s Local Loft provides attendees with fabric and apparel manufacturers who can provide nearshore-sourcing opportunities. For the virtual show, Local Loft was able to remain true to its mission while helping vendors conduct business with attendees.

“It’s great because you can meet domestic U.S. suppliers that can produce anywhere from one garment to thousands of garments, and it’s all local within Canada, the U.S. and Mexico,” Max Andrews, Fashiondex’s president, said. “The timeframe, when you’re dealing locally, the speed to market drops dramatically, and it’s so much more sustainable too. Things are not flown by Fedex from overseas.”

With sustainable goods rising in demand, according to Andrews, he felt that more emerging designers are looking to start off with an ecologically sound or ethical mission. These designers are not only seeking to satisfy a demand from consumers but also build their brand’s foundation through more-responsible manufacturing.

“It’s making the producers adjust to it. A lot of these new, young designers come in and they want to be totally correct and sustainable,” Andrews said. “A lot of people coming to market are asking for sustainable, and the designers want to do it. They are coming to terms with it costing more. You’re not going to get a $2 T-shirt; it will cost $30 or $40, but it will last five years.”

These fresh designers who are only beginning to start out are benefiting greatly from the virtual model, according to David Prentice, co-founder and senior vice president of sales and marketing for the Franklin, Tenn.–headquartered OnPoint Manufacturing. As a loyal devotee of the on-site trade-show model and regular Local Loft exhibitor, Prentice was pleased with the platform and saw the value for emerging designers, noting that the most obvious benefit of virtual options that their physical counterparts lack is the accessibility for anyone to attend regardless of where they are located.

“I think it opened up a different level of potential visitor that a traditional show wouldn’t if it’s in New York. You have to go to New York, get a hotel in New York. If you’re a new designer, new brand or small brand, you’re looking to get things going, and you’ve got a tight budget that is a big wall up,” he said. “For those guys, this was a blessing to go online, research people, set up the video chat.”

While Prentice is hopeful that on-site trade events will eventually return in some capacity, he does foresee a future with virtual components. As a self-described “aggressive trade-show worker,” Prentice and his director of marketing, Carla Antonelli, worked in tandem to establish the same energy in the virtual edition as they have in the past with physical events.

“There were appointments booked the first day of the show, first morning of the show and first hour of the show. We are still fulfilling inquiries from the show, even though it ended last week. They are coming in this week. You can’t ask for more than that. It’s from people who looked at us but maybe didn’t get to us,” he said. “It gave us the ability to play offense for the first time.”

Emerging designers and brands weren’t the only segment to find the virtual offering a more-economical choice. Exhibitors who run smaller businesses also welcomed the shift to a more-affordable show option. Ben Hostetler is the operations manager of Mountain Meadow Wool, a small-scale mill that offers direct-to-ranch, traceable wool in Buffalo, Wyo., a town of 4,000 nestled in the foothills of the Big Horn mountains.

Hostetler estimated that he would spend more than $3,000 when he exhibited at trade shows in New York City. He found that he spent more money even when he was trying to cut costs by staying at an Airbnb instead of a hotel. He spent about 10 times less to exhibit at the virtual show. He connected to buyer meetings at an office at his mill, which allowed his mill colleagues to help conduct meetings, an impossible option for a trade show in New York.

“It was a good first-time correspondence with a lot of potential customers,” he said of his company’s first virtual show.

Exhibitor Lori Wyman, the representative for North America at the Global Organic Textile Standard, experienced the learning curve and felt the event was organized well and afforded useful tools to connect with attendees. After making appointments, she would receive a reminder and virtually meet with attendees via a video chat.

“The platform worked very well for having face-to-face calls. It was just like Zoom,” she said. “For the trade, what is great about it is that you can have a booth or exhibit on the opposite side of the country for very little expense. Even the attendees—people were calling in from Florida and California who said they don’t normally go to Texworld in New York but because it’s virtual they said ‘Here I am!’”

From an attendee perspective, Wyman was able to focus on other tasks and also attend “Starting Your Sustainability Journey” and “Understanding Sustainability’s Role,” two of the many information sessions on the event roster. She felt that this added touch allowed her to experience a greater similarity between the virtual show and physical events. While she enjoys traveling to New York, Wyman recognizes the benefits to the environment that would stem from virtual shows.

“It’s so much more ecological. I love being at these shows. I live in Massachusetts. I love taking the train down to New York and staying there,” she said. “When I think of all the fossil fuels involved in putting on a show like this, I think maybe having these shows less often in person and in between these kinds of [virtual] shows, it’s a very good option.”

As the apparel industry continues to navigate the third quarter, Bacon explains that the response from attendees and exhibitors has been positive. While the virtual platform is currently serving a purpose, she looks forward to producing shows on-site one day in the future.

“The virtual platform provides an alternative to our physical event and exists as a complementary tool to sourcing,” she explained. “Exhibitors and attendees alike have been receptive to the new platform and the opportunity to connect and source, but as we all navigate through the new normal we look forward to meeting again as nothing will ever replace face-to-face interactions.”