The inaugural Swim Environmental Awareness gala is hosted at the Westin Bonaventure Hotel in Los Angeles to benefit The Costeau Society. With more than 500 guests, the black-tie event raises over $50,000. In addition to a cocktail hour and five-course dinner, the night’s activities include a silent auction that includes environmentally inspired swimwear. Six high bidders—Catalina, Why Things Burn, La Blanca, Speedo, Brenda Welch and Hobie—win the opportunity to be modeled. The evening also includes a film viewing that reveals the plight of the sea dragon, an endangered species.

Life After the Riots

Following the March 3, 1991, police beating of Rodney King by officers from the Los Angeles Police Department, the victim’s assailants are found not guilty on April 29, resulting in rage stemming from the injustice. After the verdict is handed down in Simi Valley, Calif., rioting begins in Los Angeles, much of it in the city’s southern region, with retail stores looted and vandalized. Despite an April 30–May 4 dusk-to-dawn curfew, stores from large department operations including I. Magnin Bullock’s Wilshire and Sears, Roebuck & Co., in addition to smaller operations, suffer extreme losses and damage, such as $200,000 worth of goods stolen from Frederick’s of Hollywood on Hollywood Boulevard and the $5 Clothing Store.

Born Richard Selzer in Brooklyn, N.Y., the designer and famous fashion critic Mr. Blackwell joins California Apparel News as a guest columnist. Known for his often biting critiques and rare compliments of celebrity style, Blackwell reached a level of recognition that rivaled the A-listers whose fashions he reviewed. In his first article under the “Blackwell’s People” column, Blackwell addresses “Dress Code Etiquette” in which he chastises fashion rebels who don’t abide by event dress codes. The column criticizes a new culture in Hollywood that bypasses the town’s former red-carpet glamour and advises readers, “If you can learn Nintendo in five minutes, you can learn to tie a bow tie properly.”

Following the November 1991 announcement by Earvin “Magic” Johnson that he would retire from his position on the National Basketball Association’s Los Angeles Lakers, apparel-industry businesses step up to show support. The Betty Bottom Showroom, Inc. announces that it will donate $500 per month during the entire year of 1992. The showrooms message reads, “Thank you, Mr. Earvin (Magic) Johnson for making us more aware. We at the Betty Bottom Showroom, Inc. also believe in Magic.” The wholesaler and the brands it represents pledge to support APLA, the Minority AIDS Project, AMFAR and the Maternal-Child AIDS Clinic at LAC + USC.

The North American Free Trade Agreement, which opens commerce between the United States, Canada and Mexico, passes the House of Representatives and the Senate to mixed opinions from apparel-industry business leaders. While supporters feel the legislation will open trade to entice Mexico’s middle class to buy goods from the country’s neighbor to the north, those leaders of businesses that operate on a smaller scale envision a crushing blow to apparel-industry employment with job losses expected once workers in certain segments of the trade are no longer needed from domestic workers as these positions are outsourced. 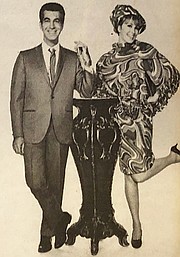 In the midst of the Summer 1994 market, held Jan. 14–18, a 6.6 earthquake shakes the Los Angeles area in the early morning hours of Jan. 17. Early projections estimate the quake resulted in 47 deaths—a figure later increased to 57. Initial figures for damages are estimated between $15 billion and $30 billion, which are later tallied at $20 billion with $49 billion in economic losses. Other operations closer to the Northridge epicenter in the San Fernando Valley are not as fortunate, such as a Bullock’s department store at the Northridge Mall, which is demolished.

The mid-1990s bring apparel to a crossroads between more-shocking elements of the cultures of hip-hop, grunge and the feminist sexuality of the riot-grrrl movement. Zooport Riot Gear creates T-shirts that feature images of controversial figures including cult leader Charles Manson and cannibal Jeffrey Dahmer. Heathyr Lawrence Hall, owner of Her Majesty, which includes the Mantrap brand, relies on blunt messaging with a few choice alternate words for female genitalia. Other businesses have divided their efforts between controversial lines such as Ash Hudson’s Conart, which relies on T-shirts featuring silkscreen graffiti images, and the controversial apparel in his Kaotic line.

On July 15, iconic Italian fashion designer Gianni Versace is murdered in Miami, shot while returning to his South Beach home from a morning stroll. Without any motive for the killing, by gunman Andrew Phillip Cunanan—who later killed himself and murdered four others during his murder spree—many in the fashion industry are left shocked. Known for his colorful and sultry garments, Versace was also famous for featuring on his runway the era-defining supermodels including the decade’s core four: Naomi Campbell, Cindy Crawford, Linda Evangelista and Christy Turlington.

It was the culmination of success for the passionate skateboard veterans whose love of the sport led them to create gear for themselves and their peers when the Vans Skate Park opened at The Block of Orange in Orange, Calif. The 40,000-square-foot space is the world’s largest skate park and features the most advanced technological offerings for this type of venue. A skate enthusiast’s dream, the skate park features an 80-foot vertical ramp, a 20,000-square-foot street course and two in-ground cement skate pools. There is also a retail center, 6,000-square-foot mezzanine, food vendors and interactive video games. 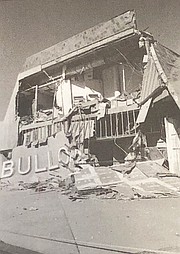 Bullock’s in Northridge destroyed by 6.6 earthquake 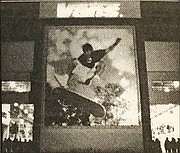 Vans Skate Park at The Block of Orange 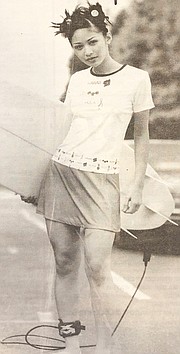